Why is this join cardinality estimate so large?

I am experiencing what I think is an impossibly high cardinality estimate for the following query:

The estimated plan is here. I am working on a statistics copy of the tables so I cannot include an actual plan. However, I don't think that it's very relevant for this problem.

I am primarily looking for a root cause for this behavior. I am interested in simple workarounds as well, but please do not suggest changing the data model or using temp tables. This query is a simplification of logic within a view. I know that doing COALESCE on a few columns and joining on them isn't a good practice. Part of the goal of this question is to figure out if I need to recommend that the data model be redesigned.

I am testing on Microsoft SQL Server 2014 with the legacy cardinality estimator enabled. TF 4199 and others are on. I can give a full list of trace flags if that ends up being relevant.

Here is the most relevant table definition:

I also scripted out all of the table creation scripts along with their statistics if anyone wants to reproduce the issue on one of their servers.

I know that doing COALESCE on a few columns and joining on them isn't a good practice.

Generating good cardinality and distribution estimates is hard enough when the schema is 3NF+ (with keys and constraints) and the query is relational and primarily SPJG (selection-projection-join-group by). The CE model is built on those principles. The more unusual or non-relational features there are in a query, the closer one gets to the boundaries of what the cardinality and selectivity framework can handle. Go too far and CE will give up and guess.

Most of the MCVE example is simple SPJ (no G), albeit with predominantly outer equijoins (modelled as inner join plus anti-semijoin) rather than the simpler inner equijoin (or semijoin). All the relations have keys, though no foreign keys or other constraints. All but one of the joins are one-to-many, which is good.

The exception is the many-to-many outer join between X_DETAIL_1 and X_DETAIL_LINK. The only function of this join in the MCVE is to potentially duplicate rows in X_DETAIL_1. This is an unusual sort of a thing.

Simple equality predicates (selections) and scalar operators are also better. For example attribute compare-equal attribute/constant normally works well in the model. It is relatively "easy" to modify histograms and frequency statistics to reflect the application of such predicates.

COALESCE is built on CASE, which is in turn implemented internally as IIF (and this was true well before IIF appeared in the Transact-SQL language). The CE models IIF as a UNION with two mutually-exclusive children, each consisting of a project on a selection on the input relation. Each of the listed components has model support, so combining them is relatively straightforward. Even so, the more one layers abstractions, the less accurate the end result tends to be - a reason why larger execution plans tend to be less stable and reliable.

ISNULL, on the other hand, is intrinsic to the engine. It is not built up using any more basic components. Applying the effect of ISNULL to a histogram, for example, is as simple as replacing the step for NULL values (and compacting as necessary). It is still relatively opaque, as scalar operators go, and so best avoided where possible. Nevertheless, it is generally speaking more optimizer-friendly (less optimizer-unfriendly) than a CASE-based alternate.

The CE (70 and 120+) is very complex, even by SQL Server standards. It is not a case of applying simple logic (with a secret formula) to each operator. The CE knows about keys and functional dependencies; it knows how to estimate using frequencies, multivariate statistics, and histograms; and there is an absolute ton of special cases, refinements, checks & balances, and supporting structures. It often estimates e.g. joins in multiple ways (frequency, histogram) and decides on an outcome or adjustment based on the differences between the two.

One last basic thing to cover: Initial cardinality estimation runs for every operation in the query tree, from the bottom up. Selectivity and cardinality is derived for leaf operators first (base relations). Modified histograms and density/frequency information is derived for parent operators. The further up the tree we go, the lower the quality of estimates tends to be as errors tend to accumulate.

This single initial comprehensive estimation provides a starting point, and occurs well before any consideration is given to a final execution plan (it happens a way before even the trivial plan compilation stage). The query tree at this point tends to reflect the written form of the query fairly closely (though with subqueries removed, and simplifications applied etc.)

Immediately after initial estimation, SQL Server performs heuristic join reordering, which loosely speaking tries to reorder the tree to place smaller tables and high-selectivity joins first. It also tries to position inner joins before outer joins and cross products. Its capabilities are not extensive; its efforts are not exhaustive; and it does not consider physical costs (since they do not exist yet - only statistical information and metadata information are present). Heuristic reorder is most successful on simple inner equijoin trees. It exists to provide a "better" starting point for cost-based optimization.

Why is this join cardinality estimate so large?

The MCVE has an "unusual" mostly-redundant many-to-many join, and an equi join with COALESCE in the predicate. The operator tree also has an inner join last, which heuristic join reorder was unable to move up the tree to a more preferred position. Leaving aside all the scalars and projections, the join tree is:

The derived table in the original query has been removed, and projections normalized. A SQL representation of the tree on which initial cardinality and selectivity estimation was performed is:

(As a aside, the repeated COALESCE is also present in the final plan - once in the final Compute Scalar, and once on the inner side of the inner join).

To that, we need to determine and apply the selectivity of the predicate. The combination of the opaque expanded COALESCE tree (in terms of UNION and IIF, remember) together with the impact on key information, derived histograms and frequencies of the earlier "unusual" mostly-redundant many-to-many outer join combined means the CE is unable to derive an acceptable estimate in any of the normal ways.

As a result, it enters the Guess Logic. The guess logic is moderately complex, with layers of "educated" guess and "not-so educated" guess algorithms tried. If no better basis for a guess is found, the model uses a guess of last resort, which for an equality comparison is: sqllang!x_Selectivity_Equal = fixed 0.1 selectivity (10% guess):

When the problematic join is commented out, a better estimate is produced because the fixed-selectivity "guess of last resort" is avoided (key information is retained by the 1-M joins). The quality of the estimate is still low-confidence, because a COALESCE join predicate is not at all CE-friendly. The revised estimate does at least look more reasonable to humans, I suppose.

When the query is written with the outer join to X_DETAIL_LINK placed last, heuristic reorder is able to swap it with the final inner join to X_LAST_TABLE. Putting the inner join right next to the problem outer join gives the limited abilities of early reorder the opportunity to improve the final estimate, since the effects of the mostly-redundant "unusual" many-to-many outer join come after the tricky selectivity estimation for COALESCE. Again, the estimates are little better than fixed guesses, and probably would not stand up to determined cross-examination in a court of law.

Reordering a mixture of inner and outer joins is hard and time-consuming (even stage 2 full optimization only attempts a limited subset of theoretical moves).

The nested ISNULL suggested in Max Vernon's answer manages to avoid the bail-out fixed guess, but the final estimate is an improbable zero rows (uplifted to one row for decency). This might as well be a fixed guess of 1 row, for all the statistical basis the calculation has.

I would expect a join cardinality estimate between 0 and 481577 rows.

This is a reasonable expectation, even if one accepts that cardinality estimation can occur at different times (during cost-based optimization) on physically different, but logically and semantically identical subtrees - with the final plan being a sort of stitched-together best of the best (per memo group). The lack of a plan-wide consistency guarantee does not mean that an individual join should be able to flout respectability, I get that.

On the other hand, if we end up at the guess of last resort, hope is already lost, so why bother. We tried all the tricks we knew, and gave up. If nothing else, the wild final estimate is a great warning sign that not everything went well inside the CE during the compilation and optimization of this query.

When I tried the MCVE, the 120+ CE produced a zero (= 1) row final estimate (like the nested ISNULL) for the original query, which is just as unacceptable to my way of thinking.

The real solution probably involves a design change, to allow simple equi-joins without COALESCE or ISNULL, and ideally foreign keys & other constraints useful for query compilation.

I believe the Compute Scalar operator resulting from the COALESCE(d1.JOIN_ID, d2.JOIN_ID, d3.JOIN_ID) being joined to X_LAST_TABLE.JOIN_ID is the root cause of the issue. Historically, compute scalars have been difficult to cost accurately1, 2.

Since you've provided a minimally complete verifiable example (thanks!) with accurate stats, I am able to rewrite the query such that the join no longer requires the CASE functionality that COALESCE is expanded into, resulting in much more accurate row estimates, and apparently more accurate overall costingSee the addendum at the end.:

While the xID IS NOT NULL is not technically required, since the ID = JOIN_ID will not join on null values, I included them since it more clearly portrays the intent.

The new query benefits(?) from parallelization. Also of note, the new query has an estimate output number of rows of 1, which may in fact be worse at the end of the day than the estimate of 4528030000 for the original query. The subtree cost for the select operator on the new query comes in at 243210, while the original clocks in at 536.535, which is clearly less. Having said that, I don't believe the first estimate is anywhere close to reality.

After further consultation with various people on The Heap™ spurred on by a discussion with @Lamak, it seems my observational query above performs terribly, even with the parallelism. A solution that allows both good performance and good cardinality estimates consists of replacing the COALESCE(x,y,z) with an ISNULL(ISNULL(x, y), z), as in:

COALESCE is transformed into a CASE statement "under the covers" by the query optimizer. As such, the cardinality estimator has a harder time discovering reliable statistics for columns buried inside COALESCE. ISNULL being an intrinsic function is much more "open" for the cardinality estimator. It's also worth nothing that ISNULL can be optimized away if the target is known to be non-nullable. 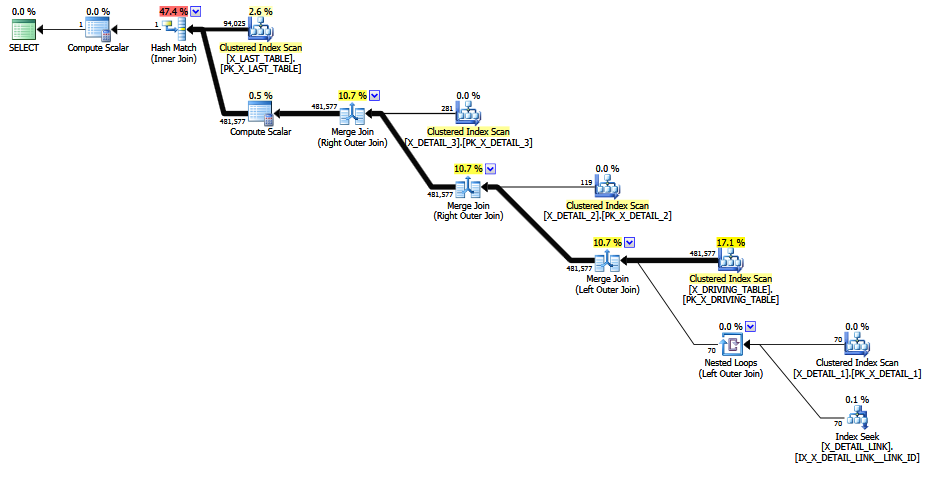 FYI, props to Sentry One for their great Plan Explorer, which I used to produce the graphical plans above.

Not the answer you're looking for? Browse other questions tagged sql-server sql-server-2012 cardinality-estimates or ask your own question.