Finding the name of the supplier that supplies the most parts

I have the following schema:

Now what I'm trying to do is get the name of the supplier that has the most items for sale in the Catalog. This is an example instance: 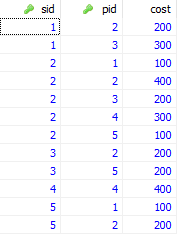 What I have so far is:

Which returns each supplier id and the number of parts they supply, which sounds like a good start; however, I'm not sure where to go from there.

I really feel like I'm over complicating this and that there is a simple solution that I'm missing. Any help is appreciated.

You didn't specify your DBMS, so this is ANSI SQL:

If you need the information from the supplier table as well, you need to join it:

This really depends on the RDBMS you're using. For SQL Server it would be:

The issue with both of these answers is that they do not take into account if two suppliers are "tied" for first. with SQL Server you'd use something like ROW_NUMBER or RANK to take care of that. Depends on your RDBMS and your specific needs.

Not the answer you're looking for? Browse other questions tagged query max or ask your own question.

3
which one is more efficient query?
6
How to GROUP_CONCAT DISTINCT values in a MySQL query that gets number of records and min/max values?
4
Find Max Value for each month for the last 3 months, properly
13
Understanding varchar(max) 8000 column and why I can store more than 8000 characters in it
0
How can I find state name which has the most vehicle accidents in the database?
1
Finding table name referfences in SSIS packages
6
Tree Node Calculation - SQL Server
1
Filtering on two separate colums
0
Adding a subquery to my SELECT clause returns an error