Is it good practice to have NULL fields dependent on the value of another field? If not what is the best alternative?

I'm designing a database to hold (biological) experimental data. The database needs to be flexible enough to data from different experiments - so some experiments measure relative levels of protein whereas others measure amount of mRNA. My question is essentially on good database design. Here is what I currently have (using Microsoft Access for visualization purposes only - I'll implement with pythons sqlite3 ) 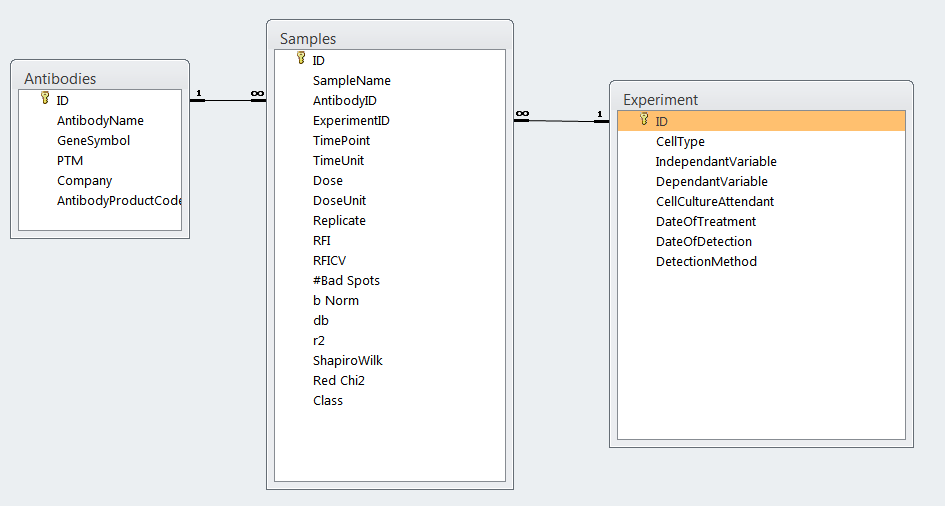 This structure will work well with a specific experiment called RPPA which is a DetectionType from the experiment table in the below schema. RPPA uses antibodies which are bought from companies and target specific proteins which are encoded for by specific genes. Western blots are another type of detection which use antibodies. The problem is that data from western blots doesn't have all the extra statistics in the raw data, so in the present scheme, if I have a 'western blot' experiment, all these extra fields that correspond to RPPA statistics must be blank. Is it good practice to build a database in which some of the fields are meant to be blank depending on the value of a field in another table?

Another problem is that if I change the detection type field to PCR or WaferGen, both of which measure biological components are the mRNA level rather than protein, then the Antibodies table does not work (because these methods complementary sequences rather than antibodies).

One idea to fix this problem is to further abstract the Antibodies table to a Targets table instead: 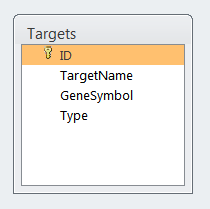 But I'm finding I have a similar problem as above. In the Targets table, the Type field can be either 'protein' or 'mRNA'. If this type is protein, then I need fields to hold the AntibodyName and Company but these are not needed if the Type is 'mRNA'. Is it good practice to build a table this way, i.e.when if the value of one field is 'x', several other fields must be NULL?

I'm a PhD student and I'm receiving a lot of data that were collected in biological experiments. This data is not only big (big for me but not as big as most of you are used to I'm sure) but of heterogeneous types - by this I mean the experiments measure different biological components, namely different species of protein and mRNA. I need a way of storing this data that is readily accessible for performing computation (hence the use of Python sqlite3's API). The database is in essence going to form the the back end of a Python package or application for data analysis.

Information about the data

Browse other questions tagged database-design or ask your own question.