What does the word "SARGable" really mean?

SQL Server users use the term "sargable". I'm wondering if there is an objective implementation-agnostic timeless definition for "sargable."

For instance, WHERE foo LIKE '%bar%' is said by many to be not sargable, but some RDBMSs are able to use indexes on such queries. What then does "not sargable" mean?

The term "sargable" was first introduced by P. Griffiths Selinger et al. in their 1979 paper "Access Path Selection in a Relational Database Management System", published by ACM. For non-ACM members there's a copy of that paper at http://cs.stanford.edu/people/chrismre/cs345/rl/selinger.pdf

The term is defined in this paragraph:

Both index and segment1 scans may optionally take a set of predicates, called search arguments (or SARGS), which are applied to a tuple before it is returned to the RSI2 caller. If the tuple satisfies the predicates, it is returned; otherwise the scan continues until it either finds a tuple which satisfies the SARGS or exhausts the segment or the specified index value range. This reduces cost by eliminating the overhead of making RSI calls for tuples which can be efficiently rejected within the RSS. Not all predicates are of the form that can become SARGS. A sargable predicate is one of form (or which can be put into the form) "column comparison-operator value". SARGS are expressed as a boolean expression of such predicates in disjunctive normal form.

You can see from the original definition that sargable predicates can apply not only to index scans, but also to table (segment in System R terminology) scans, as long as the conditions "column comparison-operator value" are met and therefore they can be evaluated by the storage engine. This is indeed the case with Db2, a descendant of System R in many ways:

The fact that in SQL Server-speak sargable predicates are only those that can be resolved using index seeks is probably determined by its storage engine's inability to apply such predicates during table scans.

Sargable and non-sargable predicates are sometimes described as "stage 1" and "stage 2" predicates respectively (this also comes from Db2 terminology). Stage 1 predicates can be evaluated at the lowest level of query processing, while reading table or index records. Rows that match stage 1 conditions, if any, are sent to the next level, stage 2, of evaluation.

1 -- Segment in System R is the physical storage of a table's tuples; a segment scan is somewhat equivalent to a table scan in other DBMSes.

2 -- RSI -- RSS3 Interface, a tuple-oriented query interface. The interface function relevant to this discussion is NEXT, which returns the next row matching query predicates.

For me, SARGable means that SQL Server can perform an index seek using your search predicates.

You can't just say the DBMS can "take advantage" of an index, because with a non-sargable predicate, SQL Server may end up scanning a nonclustered index.

According to Pro SQL Server Internals by Dmitri Korotkevitch:

A Search ARgument ABLE predicate is one where SQL SERVER can utilize an index seek operation, if an index exists.

SARGable predicates include the following operators: =, >, >=, <, <=, IN, BETWEEN, and LIKE (in the case of prefix matching)

Non-SARGable operators include: NOT, NOT IN, <>, and LIKE (not prefix matching), as well as the use of functions or calculations against the table, and type conversions where the datatype does not fulfill the index created. 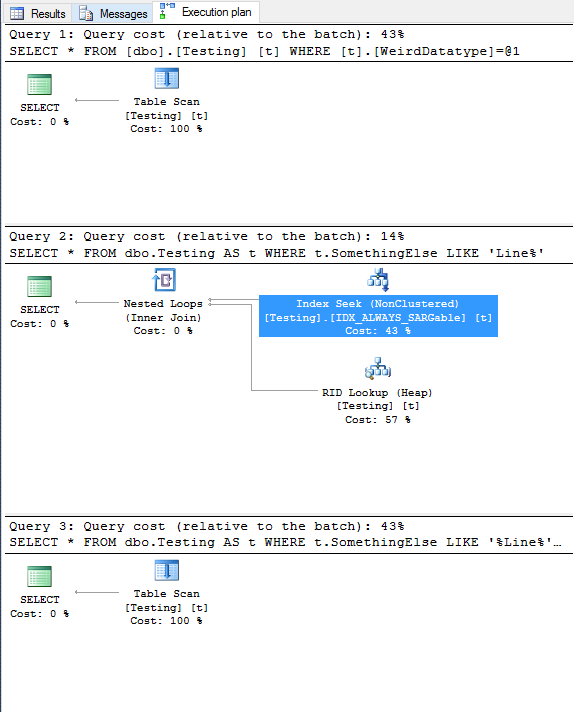 Let's look at the properties of the SARGable query (Index Seek)

The query optimizer is able to define a limit in the index of a start and end. It has a search argument to query with.

You can see with the beginning of the predicate '%non..%' does not allow the query optimizer to DEFINE a begin and end or range in the index. It must now search the whole table (scan).

Not the answer you're looking for? Browse other questions tagged terminology or ask your own question.

0
What is the word that means a query predicate can use an index
60
Cast to date is sargable but is it a good idea?
5
PostgreSQL - How does multicolumn B-Tree index work with order by on 1st column and IN lookup for 2nd?
2
Conditional Join - Specific Column Select
0
What is the difference between these extracting date method?
2
Why MySQL pick a different index for the same query structure but different values?

7
What do you call something that's not the primary key?
18
What does "collation" mean?
23
What does horizontal scaling mean?
2
What does "ISO standard equivalent" actually mean?
0
What does MBRContains and MBRWithin test? What does "contains" and "within" mean?
6
What does it mean to "materialize"?
2
What's an "object"?