The server is using Microsoft SQL Server 2014, and I have no way to change the hardware on the server.

The following query is part of a stored procedure (the rest of which is irrelevant since it has trivial impact on the stored procedure's performance). The column names have been replaced with the column type and a number:

But the information it gave so far is: 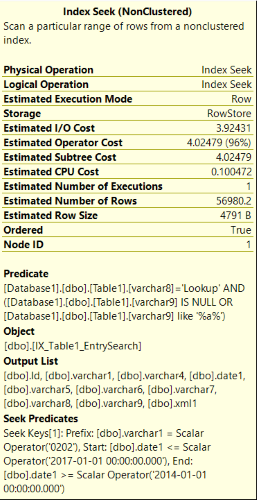 I am not using a PK in this search. This query has the following durations depending on the columns removed:

There is a clustered index on the Primary Key.

There is a non-clustered index defined as:

Unfortunately I can't really remove [xml1] or [varchar4] or I would. The index didn't seem to help much, to be honest, even though the execution plan showed it was using it.

My SQL Experience is limited to what I do with C#. I appreciate any help or guidance offered (even links), and if you need more information please let me know, I'll do my best to get it.

Fun fact, congestion wasn't slow with any other SQL server except this one, and I was only working with one database at the time so... Thank you to everyone who contributed to this question. It helped me with other SQL optimization at the time and I'm sure it has helped others also.

The double-wild card action will not do you any favors ([varchar9] LIKE '%a%'). Because you're searching in the middle of the string, SQL Server is going to scan every row, and no index will help matters. It's expensive, see Brent Ozar's post (https://www.brentozar.com/archive/2016/10/searching-strings-sql-server-expensive).

FETCH NEXT logic is necessary? It's an excellent way to bog down your resources, particularly with an xml column in tow. To read about the overhead see Figure 7.2 here (https://use-the-index-luke.com/sql/partial-results/fetch-next-page)

Aaron Bertrand writes about a great technique that minimizes the extra overhead, if you really need to do paging in sql server, I have used this technique to much applause and success. Basically, collect the PRIMARY KEYS and use that to collect the xml and all the other columns you'll need. you will be slinging around a lot less baggage. https://sqlperformance.com/2015/01/t-sql-queries/pagination-with-offset-fetch

Bret's overview and item two I would agree with, but must counter item 1 and 3:

I see you've just done a big update, so I'll perhaps do a separate broader answer. Since I can't yet comment, I'll ask a few things here:
- Are you free to add indexing as your query requires?
- Is the replacement of CONTAINS([varchar3], 'moreText') with [varchar9] LIKE '%a%' correct (i.e. do you definitely no longer need fuzzy search on varchar3?)
- Will OFFSET always be 0?
- Can you give some idea of the proportions of data you expect for columns varchar1, date1 and varchar8?

Ok, with only a nightly large insert even nolock can only be an issue during that presumably minimal-activity period, so all I would suggest to change in your latest query version is to remove the "[varchar1] ASC," as it's unnecessary (since there will only be one selected) and will actually interfere.

The indexing is going to be key.

This will satisfy your query without cluster key lookups.

Why date1 first? Because only the first index column can be used for range scans, and clearly if your users are going to need up to 65k rows at a time they will need largish date ranges.
However, it's possible the selectiveness of varchar1 may outweigh the range scan benefit, or that I've not fully understood the first-index-column-only rule (for which I can't find a good source at the moment--and it's possible the rule is actually range-scan-on-any-column-but-only-one). So since you've apparently got real-world data to test on, I would certainly also try this index instead (just the first two columns are swapped):
Create Index [i_table_index] ON Table1 (varchar1, date1, varchar8)
INCLUDE (varchar9, varchar4, varchar5, varchar6, varchar7, xml1)

Also, beware that having date1 first may make the first query page (i.e. OFFSET 0) work nice and fast, but bog down with high OFFSET values. So test both index options with both high and low OFFSET values.

Note I'm assuming that date1 ascending will be usable for the sort and fetch, but that depends how it's implemented internally. You may have to add DESC after date1 (in either index proposed so far), which I believe will make a internally fragmented mess of newly inserted pages in the nonclustered index--but perhaps you can run a reorg after the insert job.

Finally, the long INCLUDE clause will duplicate nearly all the data in your table, which may be an issue especially with large XML. (Disk space may not be such an issue, but the added memory caching may make a difference.)
So you may want to test with just varchar9 in the INCLUDE clause (kept there to efficiently satisfy the filter), as it's possible the non-filtering lookups may perform acceptably.

And you might even want to try keeping the PK as is, having no non-clustered index, and clustering on (date1, varchar1, varchar8) which would satisfy the queries in the same way as the long include, but with no wasted space. However if it turns out you need DESC after date1, clustering in this way would possibly cause too much fragmentation pain.

There is still a lot about your data that is not apparent. I suspect that the biggest drag on your performance is the XML column, since an XML column is often quite large.

Are you actually using every XML column that is in the fetch range? If there are relatively few XML columns that that match your goals, you might consider using:

Jes Borland provides a good explanation and quite a bit of guidance on using Indexed Views. Note the following where I reference some of her sample code:

Schema Binding(1) is required to create an indexed view:

A Unique Clustered Index is needed in order to turn a normal Sales.vCustomerOrders view into an indexed view that physically exists. For example, the indexed view could now look like:

If relatively few of the XML columns are actually needed in your query, then you could join the candidate XML columns to the Unique Clustered Index, perhaps greatly reducing the total amount of data being read. This may well result in a faster execution plan.

Of course, if you actually need every XML column then there would be little benefit. But that depends on the factors described in the linked article.