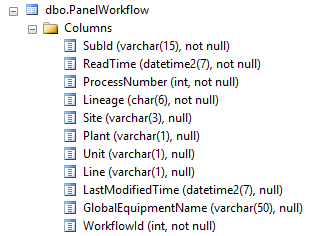 I have a columnstore clustered index on the table and no other indexes. I'm executing the following query:

The query plan looks as follows:

This table has 1.1B rows. The query plan shows a scan and the query takes about 1 minute to execute. ~21K rows are returned. Is this what I can expect from columnstore clustered indexes? Will a scan always be done (assuming no other indexes on the table)? Is this the sort of performance I can expect (acceptable but not great)?

I set Statistics IO on and got the following output:

Finally, the query above is strictly a test query to get a feel for how CSIs perform and operate. This is not a production level query.

I have a columnstore clustered index on the table and no other indexes ... The query plan shows a scan

Well, pretty much that is the only option available for a CCI. With CCIs the performance gain come from column elimination, compression and segment elimination, all contributing to reduce IO and thus allow scans to perform fast. For your case I would look at two things:

This is not what columnstores and big tables are about. You are selecting all columns that satisfy a date range and some other criteria. What for? Analytical data is all about computing aggregates and making analysis. Don't ask for *. Compute relevant analysis on the server side. Redesign your app in a manner that does not require displaying pages upon pages of raw data.

Not the answer you're looking for? Browse other questions tagged sql-server columnstore or ask your own question.

4
Every query plan statistic says my query should be faster, but it is not
3
Scan Count of a query increased from 1 to 2,226 after creating a non-clustered index
5
Clustered Index Scan when using greater than in WHERE clause
2
Does IMAGE column affect query performance even if it's not included in the query?
2
Super poor UDF performance on only 1 server, not identical other server
4
SELECT from Clustered Columnstore results in LOB Reads
2
Slow query SQL Server
0
Storing Live Timeseries Data in SQL Server Azure Database