How can I force a scalar UDF to be evaluated just once in a query?

I have a query which needs to filter against the result of a scalar UDF. The query must be sent as a single statement (so I can't assign the UDF result to a local variable) and I cannot use a TVF. I am aware of the performance issues caused by scalar UDFs, which include forcing the entire plan to be run serially, excessive memory grants, cardinality estimation problems, and lack of inlining. For this question please assume that I need to use a scalar UDF.

The UDF itself is pretty expensive to call but in theory the queries can be logically implemented by the optimizer in such a way that the function only needs to be calculated once. I have mocked up a greatly simplified example for this question. The following query takes 6152 ms to execute on my machine:

The filter operator in the query plan suggests that the function was evaluated once for each row: 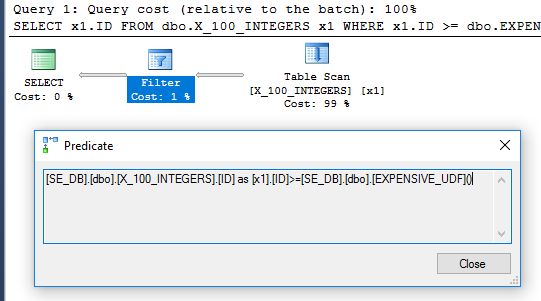 Here is a db fiddle link for the above example, although the code takes about 18 seconds to execute there.

In some cases I may not be able to edit the function's code because it is supplied by a vendor. In other cases I am able to make changes. How can I force a scalar UDF to be evaluated just once in a query?

Ultimately, it is not possible to force SQL Server to evaluate a scalar UDF just once in a query. However, there are some steps which can be taken to encourage it. With testing I believe that you can get something that works with the current version of SQL Server, but it's possible that future changes will require you to revisit your code.

After making the following change:

The query from the question is executed in 64 ms:

The query plan no longer has the filter operator: 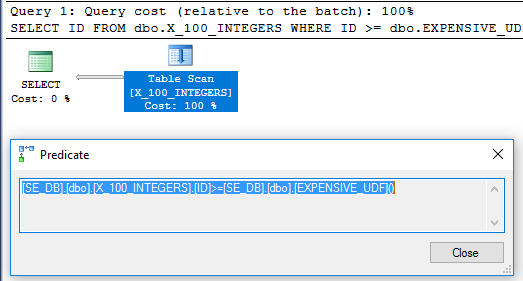 To be sure that it executed only once we can use the new sys.dm_exec_function_stats DMV released in SQL Server 2016:

Issuing an ALTER against the function will reset the execution_count for that object. The above query returns 1 which means the function was only executed once.

Note that just because the function is deterministic does not mean that it will be evaluated only once for any query. In fact, for some queries adding SCHEMABINDING can degrade performance. Consider the following query:

The superfluous DISTINCT was added to get rid of a Filter operator. The plan looks promising: 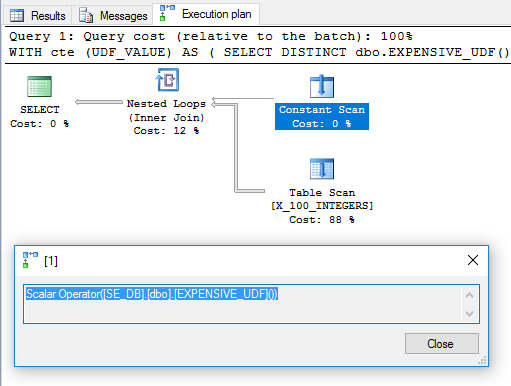 Based on that, one would expect the UDF to be evaluated once and to be used as the outer table in the nested loop join. However, the query takes 6446 ms to run on my machine. According to sys.dm_exec_function_stats the function was executed 100 times. How that is that possible? In "Compute Scalars, Expressions and Execution Plan Performance", Paul White points out that the Compute Scalar operator can be deferred:

More often than not, a Compute Scalar simply defines an expression; the actual computation is deferred until something later in the execution plan needs the result.

For this query it looks like the UDF call was deferred until it was needed, at which point it was evaluated 100 times.

Interestingly, the CTE example executes in 71 ms on my machine when the UDF is not defined with SCHEMABINDING, as in the original question. The function is only executed once when the query is run. Here is the query plan for that: 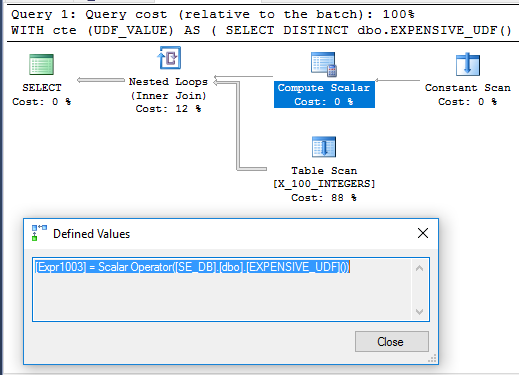 It's not clear why the Compute Scalar isn't deferred. It could be because the nondeterminism of the function limits the rearranging of operators that the query optimizer can do.

An alternative approach is to add a small table to the CTE and to query the only row in that table. Any small table will do, but let's use the following:

The query then becomes:

The addition of the dbo.X_ONE_ROW_TABLE adds uncertainty for the optimizer. If the table has zero rows then the CTE will return 0 rows. In any case, the optimizer cannot guarantee that the CTE will return one row if the UDF is not deterministic, so it seems likely that the UDF will be evaluated before the join. I would expect the optimizer to scan dbo.X_ONE_ROW_TABLE, use a stream aggregate to get the maximum value of the one row returned (which requires the function to be evaluated), and to use that as the outer table for a nested loop join to dbo.X_100_INTEGERS in the main query. This appears to be what happens: 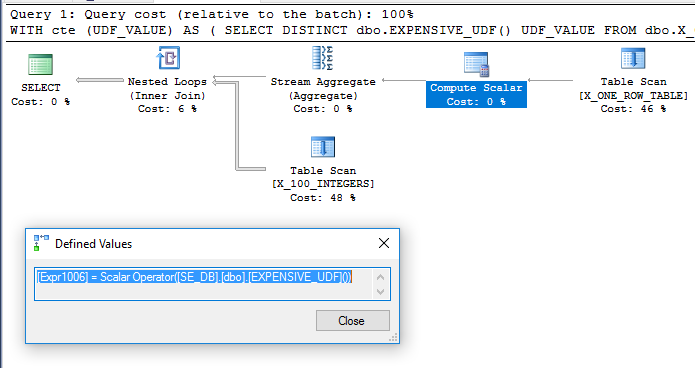 The query executes in about 110 ms on my machine and the UDF is evaluated only once according to sys.dm_exec_function_stats. It would be incorrect to say that the query optimizer is forced to evaluate the UDF only once. However, it is hard to imagine an optimizer rewrite that would lead to a lower cost query, even with the limitations around UDF and compute scalar costing.

In summary, for deterministic functions (which must include the SCHEMABINDING option) try writing the query in as simple of a way as possible. If on SQL Server 2016 or a later version, confirm that the function was only executed once using sys.dm_exec_function_stats. Execution plans can be misleading in that regard.

For functions not considered by SQL Server to be deterministic, including anything lacking the SCHEMABINDING option, one approach is to put the UDF in a carefully crafted CTE or derived table. This requires a little care but the same CTE can work for both deterministic and nondeterministic functions.

Not the answer you're looking for? Browse other questions tagged sql-server performance functions query-performance or ask your own question.

57
Is there any benefit to SCHEMABINDING a function beyond Halloween Protection?
5
Scalar function value not being stored

4
Why would call to scalar function inside a Table Value Function be slower than outside the TVF?
3
SQL Server 2014 - Compute scalar over computed indexed column
5
How can I pass column to function in sql?
2
MySQL query taking too long
2
Conversion failed when converting the varchar value 'TerminatedByCompany' to data type int
5
Scalar function value not being stored
2
Efficiency of Scalar UDF vs TVF
11
Inline Scalar UDF Under RCSI - Can Results Differ