Detect if any values in NVARCHAR columns are actually unicode

EDIT: 3/20/2017: Some people have asked if the source table is the ONLY source to the target table. Yes, it is the only source. As far as the ETL goes, there isn't any real transformation happening; it effectively is intended to be a 1:1 copy of the source data. Therefore, there are no plans to add additional sources to this target table.

A little over half of the columns in [Q].[G] are VARCHAR (source table):

Similarly, the same columns in [P].[G] are NVARCHAR (target table), with the same # of columns with the same widths. (In other words, same length, but NVARCHAR).

This is not my design.

I'd like to ALTER [P].[G] (target) columns data types from NVARCHAR to VARCHAR. I want to do it safely (without data loss from conversion).

How can I look at the data values in each NVARCHAR column in the target table to confirm whether or not the column actually contains any Unicode data?

A query (DMVs?) that can check each value (in a loop?) of each NVARCHAR column and tell me if ANY of the values is genuine Unicode would be the ideal solution, but other methods are welcome.

Suppose one of your columns does not contain any unicode data. To verify that you would need to read the column value for every row. Unless you have an index on the column, with a rowstore table you will need to read every data page from the table. With that in mind I think it makes a lot of sense to combine all of the column checks into a single query against the table. That way you won't be reading the table's data many times and you don't have to code a cursor or some other kind of loop.

To check a single column believe that you can just do this:

A cast from NVARCHAR to VARCHAR should give you the same result except if there are unicode characters. Unicode characters will be converted to ?. So the above code should handle NULL cases correctly. You have 24 columns to check, so you check each column in a single query by using scalar aggregates. One implementation is below:

For each column you will get a result of 1 if any of its values contain unicode. A result of 0 means that all data can be safely converted.

I strongly recommend making a copy of the table with the new column definitions and copying your data there. You'll be doing expensive conversions if you do it in place so making a copy might not be all that much slower. Having a copy means that you can easily validate that all of the data is still there (one way is to use the EXCEPT keyword) and you can undo the operation very easily.

Also, be aware that you might not have any unicode data currently it's possible that a future ETL could load unicode into a previously clean column. If there is not a check for this in your ETL process you should consider adding that before doing this conversion.

Before doing anything, please consider the questions posed by @RDFozz in a comment on the question, namely:

The main issue here is not so much having Unicode code points that can't convert (ever), but more so having code points that won't all fit onto a single code page. That is the nice thing about Unicode: it can hold characters from ALL code pages. If you convert from NVARCHAR – where you don't need to worry about code pages – to VARCHAR, then you will need to make sure that the Collation of the destination column is using the same code page as the source column. This assumes having either one source, or multiple sources using the same code page (not necessarily the same Collation, though). But if there are multiple sources with multiple code pages, then you can potentially run into the following problem:

As you can see, all of those characters can convert to VARCHAR, just not in the same VARCHAR column.

Use the following query to determine what the code page is for each column of your source table:

You mentioned being on SQL Server 2008 R2, BUT, you didn't say what Edition. IF you happen to be on Enterprise Edition, then forget about all this conversion stuff (since you are likely doing it just to save space), and enable Data Compression:

If using Standard Edition (and it now seems that you are 😞 ) then there is another looooong-shot possibility: upgrade to SQL Server 2016 since SP1 includes the ability for all Editions to use Data Compression (remember, I did say "long-shot" 😉 ).

Of course, now that it has just been clarified that there is only one source for the data, then you don't have anything to worry about since the source couldn't contain any Unicode-only characters, or characters outside of its specific code page. In which case, the only thing you should need to be mindful of is using the same Collation as the source column, or at least one that is using the same Code Page. Meaning, if the source column is using SQL_Latin1_General_CP1_CI_AS, then you could use Latin1_General_100_CI_AS at the destination.

Once you know what Collation to use, you can either:

I have some experience with this from back when I had a real job. Since at the time I wanted to preserve the base data, and I also had to account for new data that could possibly have characters that would get lost in the shuffle, I went with a non-persisted computed column.

Here's a quick example using a copy of the Super User database from the SO data dump.

We can see right off the bat that there are DisplayNames with Unicode characters: 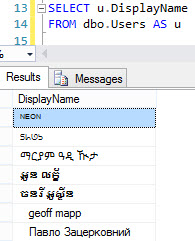 So let's add a computed column to figure out how many! The DisplayName column is NVARCHAR(40).

The execution plan is a bit of a drag, though. The query finishes fast, but this data set isn't terribly large.

Since computed columns don't need to be persisted to add an index, we can do one of these:

Which gives us a slightly tidier plan:

I understand if this isn't the answer, since it involves architectural changes, but considering the size of the data, you're probably looking at adding indexes to cope with queries that self join the table anyway.

Using the example in How to check if a field contains unicode data, you could read the data in each column and do the CAST and check below:

Not the answer you're looking for? Browse other questions tagged sql-server datatypes unicode or ask your own question.

2
Query table A for any rows that are like any search term in table B
5
How can I efficiently downsize some Unicode fields?
3
"String or binary data would be truncated" error copying nvarchar(10) to char(10)
2
UTF8 Trouble while migrating from MSSQL to MySQL with MySQL Workbench
2
ssis cannot convert between unicode and non-unicode data types even though the source and the destination columns are both unicode
18
Why does the varchar datatype allow unicode values?
3
Converting columns from NVARCHAR to VARCHAR
7
Are duplicated NVARCHAR values stored as copies in SQL Server?
1
Improve performance searching nvarchar values on varchar column