In the ERD provided, I have colour coded the relationship between the TradeBasket and EligibleEquities and EligibleIndices.

This question has a similar discussion, but doesn't fully answer my question.

Thanks for any help!

Before I attempt to answer your questions, just a couple of hints that may help you to create the perfect model :-) Bear with me.

Q0) However, is it possible to create a Many:Many relationship between ElibibleEquity and EligibleIndices if they are children to the TradeBasket?

Q1) To facilitate a relationship between EligibleEquity and EligibleIndices, what should the cardinalities should i adopt (red or purple - in relation to the ERD)?

Answer 1) Find out, and use, whatever is correct! Does EACH EligibleEquity (potentially) use/contain ONE OR MORE EquitableIndices? AND: Is EACH EquitableIndex used/contained within ONE OR MORE EquitableEquities? -> If the answer to both of these questions is: YES, then model a many-to-many relationship. (This will require an "intersection" or "junction" later on -> see the HYPOTHETICAL... entity in the attached ERD.) 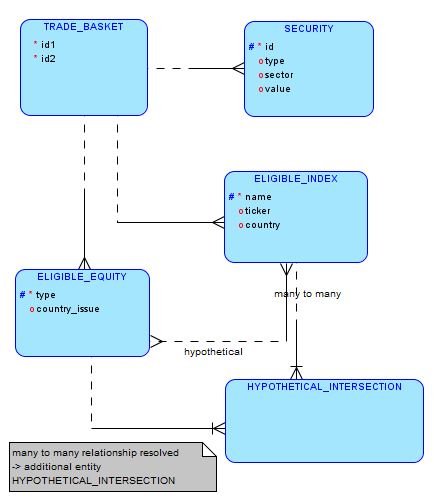 Answer 2) -> The key for this could be: the combination of the UNIQUE IDENTIFIERs (UIDs) of TradingBasked and EligibleEquity (or EligibleIndex, respectively).

Eg - situation as discussed in "Answer 1": if the UIDs are the attributes(EligibleEquity)TYPE, and (EligibleIndex)INDEX_NAME, respectively, then a combination of these (unique) values can serve as a UID of the intersection/junction. (-> See the keys of the HYPOTHETICAL... table in the attached Relational model.) 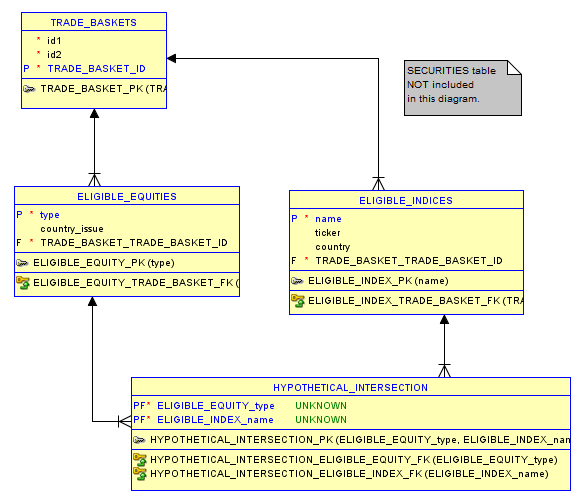 There is more to be considered, and I'm sure that there will be more questions. Let us know how you get on!

Not the answer you're looking for? Browse other questions tagged database-design ms-access or ask your own question.

5
Constraint many to many table between two child tables

5
Deciding when to extend to child tables
2
Database Design Techniques, Notations and Terminology
2
Conversion of simple ERD to Table: is the solution below any good?
5
Is my entity-relationship diagram about customers and accounts correct?
7
In a one-to-one relationship, where should the foreign key be placed?
3
How to represent the optionality of a many-to-one mandatory relationship from the Parent to its two Child entity types in an ERD?
2
If two entities are engaged in a many-to-many relationship with both entities participating totally, how many tables are needed?
2
How to model a set of unique objects?
1
Determining Cardinality in a Logical Model