Where can I find the first standardization of SQL, SQL-86?

This question is different but similar to this request looking for SQL-89.

The first draft of SQL is labeled SQL-86. Numerous references are made to it. Is this available to download? Wikipedia doesn't even have a page for it. I'm interested in it for historical reasons.

It seems to also be called

The spec is cited in documents from the period as coming from ANSI Technical Committee X3H2.

I found some references about an HTML version of SQL-86.

The new URL for the HTML translation of SQL-86 is:

The reason for this move is that I am taking a job in another lab and I had to get it off of my PC hard drive.

Unfortunately this link is broken, but I believe the OP is still working at NIST >as a Computer Scientist.

I've sent him a request via LinkedIN, and now I'm waiting for a reply.

The 'HTML version' was a demonstration project that was never completed. Your best bet is to try to obtain the ANSI specification through interlibrary loan.

I've found new references dated 12 Oct 89 about ANSI X3.135-1986: it's from newsgroup comp.databases where someone else was interested on this document. There is a response by Merrill Holt to the initial inquiry. Merrill Holt claims to be "a member of the X3H2 SQL and X3H2.1 RDA committees.", that seems likely as they're writing from a Sybase email address. He/she says,

The answer points out to this company that may have the document:

It turns out ISO does mention ISO 9075:1987 however they have it listed as obsolete and retired and are not currently selling it.

US Army Corps of Engineers

And I've found one available exemplar at: 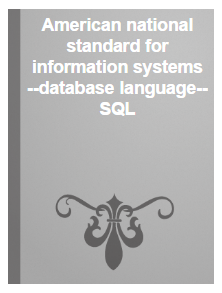 I'm not sure this is the original book covers.

It seems some sources references this as ISO/TC 97/SC21/WG3 N117. However, I'm not sure how to read this or if this designation refers to the document or not. This source helps break down the acronyms.

I reached out to them

Thanks for reaching out. Unfortunately, we do not sell or offer the 1986 version of the SQL standard (ANSI X3.135-1986) for historical reasons. In general, we offer few historical documents, as the revisions mark important changes. However, as your research into the subject has indicated, you can buy some later versions, as well as the current ISO/IEC 9075-1:2016 document on our store.

Sorry, please let us know if you have any other questions.

I wrote again to them asking if they could offer it for free for historical and educational purposes (because they're not selling it). They actually responded to that too,

Sorry, but we don't have that standard at all. ANSI X3.135-1986 was published in print, which we haven't offered for years now. The document isn't even in our database.

However, it might be useful to contact ISO/IEC JTC 1, the joint technical committee responsible for the publication of the newest edition of the standard. You can reach the ISO Editorial Program Manager here:

Being unable to find a copy and having ANSI unwilling to sell a copy, it seems that SQL-86 is lost in the age of the internet.

Not the answer you're looking for? Browse other questions tagged sql-standard or ask your own question.

9
Is the keyword “ALIAS” actually used?
6
Where can I find the SQL-89 standard?

4
Obtaining gratis copy of the SQL specification?
4
According to the SQL92 spec, can I store the value 1 in a field where the precision = scale?
23
Is the optimisation fence behaviour of a CTE (WITH query) specified in the SQL:2008 standard? If so, where?
14
Where can I find the SQL standard document?
7
the <set clause>'s <multiple column assignment>
5
What actually is a SQL clause?
6
Where can I find the SQL-89 standard?