Why does my parallel query sometimes process billions of extra rows?

I was running some data prep queries when I noticed that one of them sometimes ran much longer than expected. The query should have finished in seconds but sometimes would take minutes to run. Here is the query:

Here's an actual execution plan for when the query runs quickly. I can't find anything out of the ordinary in the plan.

However, there is something wrong in the query plan when the query takes longer than expected. The final (reading from right to left) nested loop operator generates around 13.3 billion rows. I would expect only expect it to generate around 20 million rows because of the row goal introduced by TOP. I've observed between one to three threads spin out of control and it seems like this is directly responsible for the long runtime.

Why does my parallel query sometimes process billions of extra rows? What can I do about it?

I am on SQL Server 2016 SP1. I've been unable to reproduce the issue with a compatibility level of 120.

Let's start by discussing why the fast query processes a little more than exactly 20 million rows. Here's a screenshot:

In my testing, the final nested loop operator running with MAXDOP 4 always generates 20008861 rows before the rows are reduced to exactly 20 million by the TOP operator. This is because parallel queries in SQL Server work with packets of data (it's the "PACKET" in the common CXPACKET wait event). We can see evidence of this by running a similar query that returns just 100 rows and with trace flag 8649 to force a parallel plan:

Most of the time I see around 9000 total rows processed:

The rows processed by each thread are usually close to multiples of 1023. So perhaps the packet size for this query is 1023? If threads are working with packets of data and the other threads are already in the process of getting more data when we finally get the last row, it seems reasonable that we could see more rows processed than strictly necessary due to parallelism.

That was somewhat educational but it doesn't explain why the query sometimes processes billions of rows. To get insight into that we can use the sys.dm_exec_query_profiles dmv introduced in SQL Server 2014. Here's a snapshot of some of the rows from dmv during one of the slow runs: 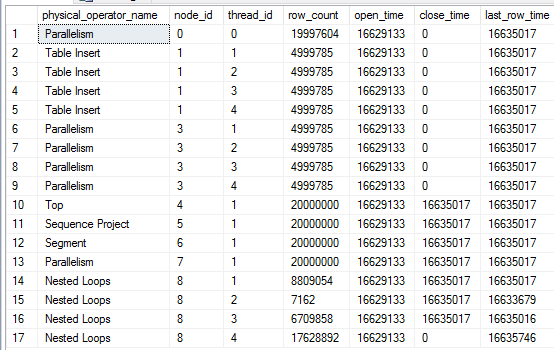 Here's the query plan with the relevant nodes labeled to give some context to the data:

There are a few interesting things to note here. We've inserted 19997604 rows into the table, so the query is very close to done. Threads 1-3 for the nested loop join at node_id 8 have finished all of their work. The TOP operator at node 4 has already met its row goal of 20000000 rows and has closed. However, thread 4 for the nested loop join continues to fetch rows. Those rows aren't being sent anywhere according to the last_row_time column. Also, the parallelism node at node 3 is still open. If I let the query run nothing changes except the row count for thread 4: 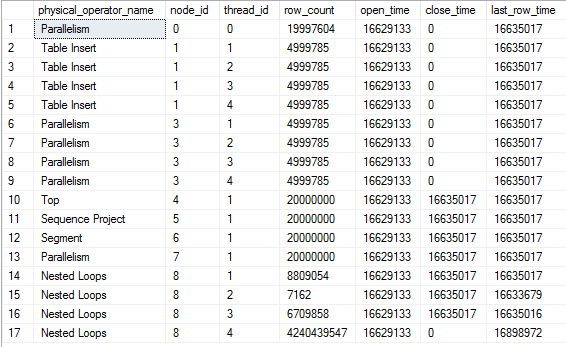 Eventually it will run out of packets to send and the query will finish.

The most obvious workaround is to make the entire query run serially. However, suppose I still need part of the query to run in parallel for performance reasons. Parallel insert requires a TABLOCK hint. If I remove the TABLOCK hint I'm unable to reproduce the issue, but I also lose minimal logging. If I don't want to lose minimal logging I can set trace flag 9495 at the global level. It's important to also include a NORECOMPILE hint or to wipe the plan from the cache because cached plans can cause parallel inserts even with trace flag 9495 enabled. An alternative to the trace flag is to something else which prevents parallel inserts, such as adding a nonclustered index to the table. Any index will do, including a filtered one that doesn't actually contain any rows:

In summary, I can't say for sure why the query sometimes processes billions of rows but it definitely seems like unintended behavior. Perhaps it is some kind of parallelism-related race condition. For this query disabling parallel insert seems sufficient to prevent the bug from reappearing.

Not the answer you're looking for? Browse other questions tagged sql-server performance sql-server-2016 parallelism query-performance or ask your own question.

4
Why does minimal logging appear to result in a smaller table size?
36
Why would a SELECT query cause writes?
0
datetime column returning a zero when queried from a view
0
Understanding why a query is slow
0
How to debug database server freeze (not accepting connections, timeouts etc)
2
Why does elimination of an if-statement cause notable speed up in my function?
0
Maximum Error Count Reached
0
PostgreSql subquery evaluated without filtering