How to design a relational DB to capture the same entity as reported by multiple sources?

Here's the diagram that I have so far: 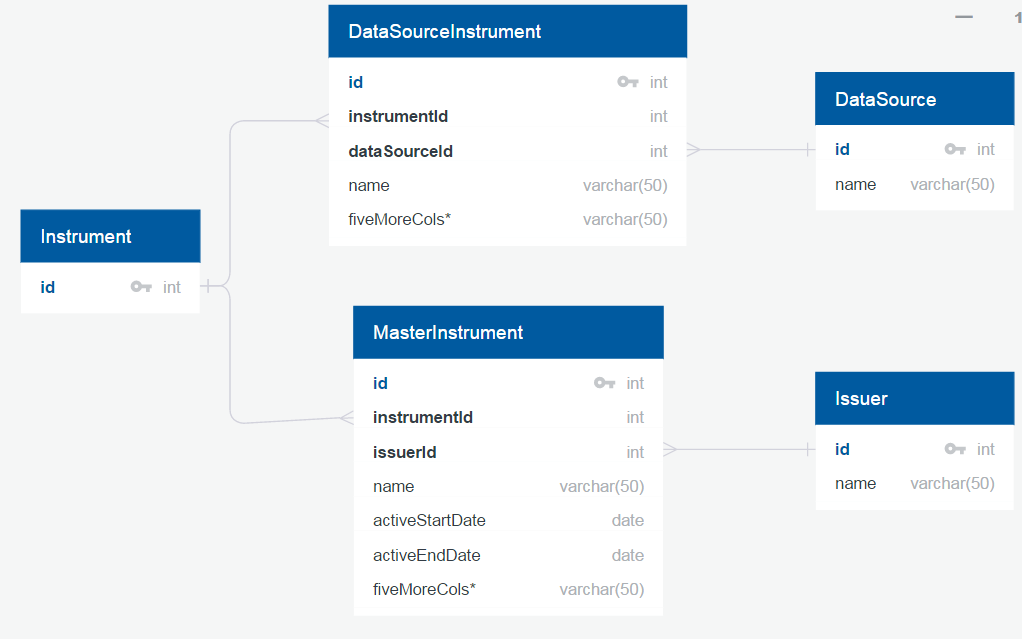 * Table contains five additional columns. These five column names are the same for MasterInstrument and DataSourceInstrment.

The DataSource represents the bank, accounting firms, or any other entity that can provide data.

The Issuer represents the issuer of the instrument such as "Wal-Mart Stores, Inc." Note: It only needs to be captured for MasterInstruments.

I have a couple of doubts on this design:

The system's primary function / raison d'être is reporting. It must report for a given date what the internal instrument (i.e. MasterInstrument) data was on that date. This is why I have MasterInstrument as a history /temporal table and do not have the columns in Instrument.

Is it poor design to have a table (i.e. Instrument) with only a single surrogate column? If this is a problem, how would it be designed differently?

If that is the only constant property of the entity then that is fine, but I would assume that there are other invariant properties such as a name ("Walmart" in your example). Even if the same "instrument" can be referred to by different names by each source and issuer (those names then belong in the relation table) do they not have a canonical name?

Are the various *Instrument table names confusing? If so, how could it be more clear?

It depends a lot on how well you document them and/or the names and naming conventions in your target industry.

Table names should be as descriptive as possible (you can always shorten them in queries using aliases) avoiding generic words where possible. Where a generic name is needed because nothing more speciifc isn't too specific then I would suggest the simplest generic word that fits (item, object, thing) rather than instrument, but that is personal preference.

For junction tables (relation tables, or whatever you call them as there are several common names for the same concept) I recommend the name represents the row entity types in the relationship - so IssuerInstrument rather than MasterInstrument in your diagram.