Why does CCI creation on an empty table request a huge memory grant?

On a QA server with very low memory, I experienced error 8545 when creating clustered columnstore indexes on new tables in SQL Server 2016:

Error 8645: A time out occurred while waiting for memory resources to execute the query. Re-run the query.

I can easily reproduce a large requested memory grant on my local machine. For the following code:

I get a memory request of around 512 MB of memory. There is a warning for the excessive memory grant in the actual execution plan: 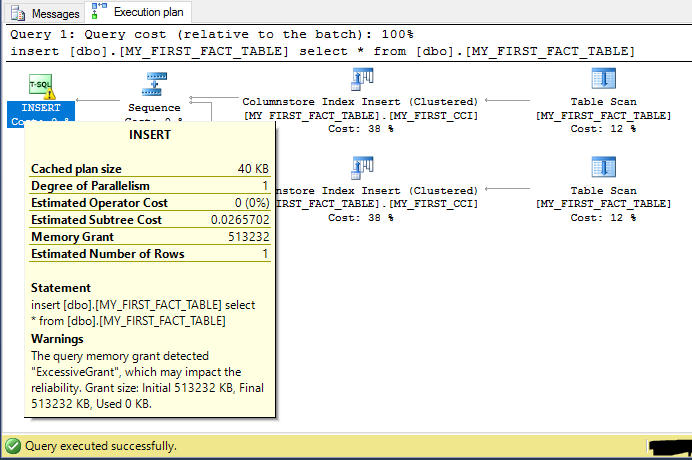 Even though the query uses 0 KB of memeory it still might time out depending on other activity on the server. Why does SQL Server request so much memory? What can I do about it?

There's a hint about this in the documentation for CCI query performance:

Plan for enough memory to create columnstore indexes in parallel

That quote suggests that the number of rows in the table matters for DOP but doesn't matter for the memory grant. The memory required also depends on the number of columns so let's test with a table with fewer columns to more easily see the expected difference in memory grant. I'm using this table and index definition:

Below are results from a few tests:

So now I have an idea of why the memory grant is so large, but what can be done about it? SQL Server 2014 introduced the syntax to define an index definition as part of the table definition. It is possible to write a single statement that creates both the table and the index:

Specifies to store the entire table in columnar format with a clustered columnstore index. This always includes all columns in the table. The data is not sorted in alphabetical or numeric order since the rows are organized to gain columnstore compression benefits.

For the original table the syntax would look like this:

A CREATE TABLE statement does not generate an actual plan so I can't immediately tell if this reduced the memory grant. I tried creating the table 1000 times while hammering the sys.dm_exec_query_memory_grants DMV but never got any results. That suggests that memory was not granted but isn't proof. I also tried extended events with query_memory_grant_usage and didn't get any results for the single CREATE TABLE statement.

Of course, the best way to test is to create the CCI the original workflow conditions with limited available memory. I did that and did not experience any memory timeouts.

I suppose it could be said that defining the CCI in the CREATE TABLE statement for a new table is a best practice. However, if your workload causes this error then changing the CREATE TABLE script probably isn't sufficient to address other problems that you'll run into, such as memory issues when you starting loading data into the CCIs.

Not the answer you're looking for? Browse other questions tagged sql-server sql-server-2016 columnstore memory-grant or ask your own question.

29
What is the most efficient way to get the minimum of multiple columns on SQL Server 2005?
6
Does having an index on a VARCHAR column with a lot of very similar starting values have bad performance
3
SQL Server - Logical Reads lowered, Execution time remained the same
2
deteriorating stored procedure running times
7
Two columns with and without index in where clause - How index works
4
Huge Memory Grant resulting in RESOURCE SEMAPHORE waits for other queries
22
When does SQL Server warn about an Excessive Memory Grant?
2
Excessive memory grants from indexed foreign key cascade delete
4
SQL Server 2016 - excessive memory grant warning on poor performing query
0
Why am I getting error 35353 when enabling CDC on a table with a CCI?