I have three SQL database instances on a cloud server: A, B and C and the Server Installed Physical memory (RAM) is 32GB. The size of A (data+log file) is 44GB and B (data+log file) is 41GB. We ignore C since it has no databases in it and max memory set to 500MB.

Both instances A & B has it's memory set to the default size: 2147483647 MB. Although we have had no issues this is definitely not practical.

After some research, based on database activity, i decided that instance A memory allocation should be set to 20GB and B set to 10GB. In total 30/32 of the max physical memory in the system. Below shows the actual memory consumption. I am afraid if i set the max memory it will slow down response time. Is this configuration optimal in setting the SQL Max Server Memory for such databases and how can i simulate before applying? 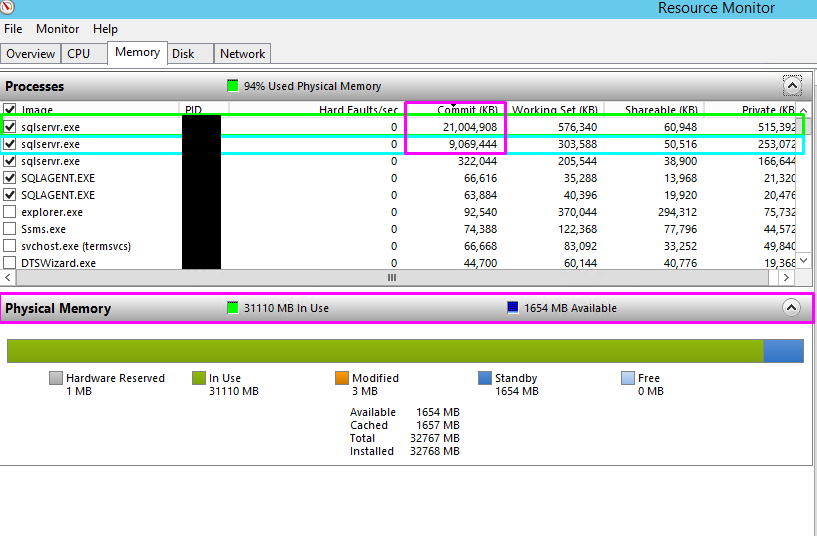 In my opinion you're not leaving near enough for the operating system: on a 32GB system, I'd probably leave 4GB or so. Remember that local logins, SQL jobs and SSIS packages, and 3rd-party backup software and the like all use memory outside the allocated space for the SQL engine itself. If I know there are memory-hogging SSIS packages run regularly, I'll leave even more memory for the OS.

How you split the remaining between the 3 instances is up to you. There is no (serious) risk of impact by changing these on the fly, they don't even require a SQL restart to take effect.

Don't worry about a minor difference in your planned max size vs what you see in your graph there. SQL is a hog, and will use as much memory as you give it. If you reduce the max, it will have to release some memory, but it's just giving up a portion of its local data cache. It may have to go back to disk slightly sooner for some queries, but I doubt you'll notice a difference.

EDIT: After some discussion in the comments, it doesn't appear a SQL restart is necessary, even when the MaxMem is reduced below the currently used amount.

A general recommendation by Jonathan (from SQLSkills)

I would go with Test-DbaMaxMemory to check the recommendations first and once you are comfortable, use set to set it across all your servers.

What you will see is that less data can be cached and, thus, some queries will have desegregated performance. The default value for RAM just, kind of, means that SQL Server will use 'whatever it can.' Once it goes up, it won't come back down until the service is restarted as it then reserves all that RAM (because it caches data on it.)

This is my favorite resource for determining how much RAM a server really needs. My only issue with it is that it doesn't really take in to account smaller VM based machines and just assumed that you CAN throw 128gb+ at a server.

A general rule of thumb is 10%, or 8GB, dedicated to OS/Auxiliary with the rest being dedicated to SQL Server (through the MAX Ram setting.) (10% or 8GB, whichever is more.)

Have you done analysis to see how much actual memory each instance requires? Avoid using Task Manager to determine SQL memory requirements, there are proper perfmon metrics to use for SQL memory usage.

7
What's a good way to get SQL Server to release memory to the operating system on a dev machine?
1
How to decrease RAM usage of SQL Server 2012 without restarting Service