How can I convert the first 100 million positive integers to strings?

This is a bit of an diversion from the real problem. If providing context helps, generating this data could be useful for performance testing ways of processing strings, for generating strings which need to have some operation applied to them within a cursor, or for generating unique, anonymous name replacements for sensitive data. I'm just interested in efficient ways of generating the data within SQL Servers, please don't ask why I need to generate this data.

I'll try to start with a somewhat formal definition. A string is included in the series if it only consists of capital letters from A - Z. The first term of the series is "A". The series consists of all valid strings sorted by length first and typical alphabetical order second. If the strings were in a table in a column called STRING_COL, the order could be defined in T-SQL as ORDER BY LEN(STRING_COL) ASC, STRING_COL ASC.

To give a less formal definition take a look at alphabetical column headers in excel. The series is the same pattern. Consider how you might convert an integer to a base 26 number:

The analogy isn't quite perfect because "A" behaves differently than 0 in base ten. Below is a table of selected values that will hopefully make it more clear:

The goal is to write a SELECT query that returns the first 100000000 strings in the order defined above. I did my testing by running queries in SSMS with the result set discarded as opposed to saving it to a table: 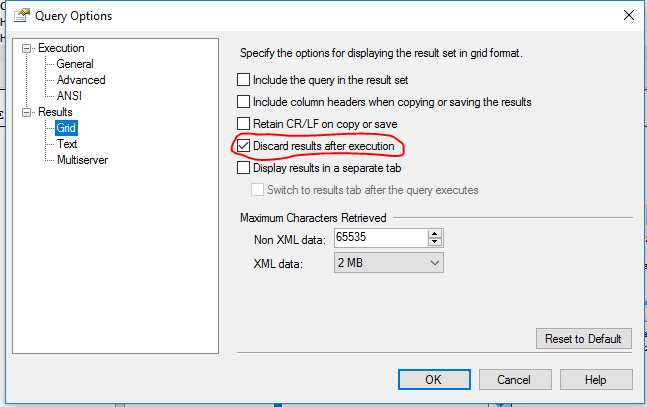 Ideally the query will be reasonably efficient. Here I'm defining efficient as cpu time for a serial query and elapsed time for a parallel query. You may use whatever undocumented tricks that you like. Relying on undefined or non-guaranteed behavior is okay as well but it would be appreciated if you call that out in your answer.

What are some methods of efficiently generating the data set described above? Martin Smith pointed out that a CLR stored procedure probably isn't a good approach due to the overhead of processing so many rows.

Your solution runs for 35 seconds on my laptop. The following code takes 26 seconds (including creating and populating the temporary tables):

The idea there is to pre-populate ordered combinations of up to four characters.

That is a simple order-preserving union* of the four precalculated tables, with 5-character and 6-character strings derived as needed. Separating the prefix from the suffix avoids sorting.

* There's nothing in the SQL above that specifies an order-preserving union directly. The optimizer chooses physical operators with properties that match the SQL query specification, including top-level order by. Here, it chooses concatenation implemented by the merge join physical operator to avoid sorting.

The guarantee is that the execution plan delivers the query semantic and top-level order by specification. Knowing that merge join concat preserves order allows the query writer to anticipate an execution plan, but the optimizer will only deliver if the expectation is valid.

I'll post an answer to get started. My first thought was that it should be possible to take advantage of the order-preserving nature of a nested loop join along with a few helper tables that have one row for each letter. The tricky part was going to be looping in such a way that the results were ordered by length as well as avoiding duplicates. For example, when cross joining a CTE that includes all 26 capital letters along with '', you can end up generating 'A' + '' + 'A' and '' + 'A' + 'A' which is of course the same string.

The first decision was where to store the helper data. I tried using a temp table but this had a surprisingly negative impact on performance, even though the data fit into a single page. The temp table contained the below data:

Compared to using a CTE, the query took 3X longer with a clustered table and 4X longer with a heap. I don't believe the problem is that the data is on disk. It should be read into memory as a single page and processed in memory for the entire plan. Perhaps SQL Server can work with data from a Constant Scan operator more efficiently than it can with data stored in typical rowstore pages.

Interestingly, SQL Server chooses to put the ordered results from a single page tempdb table with ordered data into a table spool:

SQL Server often puts results for the inner table of a cross join into a table spool, even if it seems nonsensical to do so. I think that the optimizer needs a little bit of work in this area. I ran the query with the NO_PERFORMANCE_SPOOL to avoid the performance hit.

One problem with using a CTE to store the helper data is that the data isn't guaranteed to be ordered. I can't think of why the optimizer would choose not to order it and in all of my tests the data was processed in the order that I wrote the CTE: 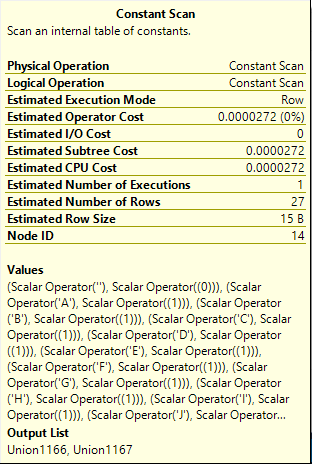 However, best not to take any chances, especially if there's a way to do it without a large performance overhead. It's possible to order the data in a derived table by adding a superfluous TOP operator. For example:

That addition to the query should guarantee that results will be returned in the correct order. I expected all of the sorts to have a large negative performance impact. The query optimizer expected this as well based on the estimated costs:

Very surprisingly, I could not observe any statistically significant difference in cpu time or runtime with or without explicit ordering. If anything, the query seemed to run faster with the ORDER BY! I have no explanation for this behavior.

The tricky part of the problem was to figure out how to insert blank characters into the right places. As mentioned before a simple CROSS JOIN would result in duplicate data. We know that the 100000000th string will have a length of six characters because:

Therefore we only need to join to the letter CTE six times. Suppose that we join to the CTE six times, grab one letter from each CTE, and concatenate them all together. Suppose the leftmost letter is not blank. If any of the subsequent letters are blank that means that the string is less than six characters long so it is a duplicate. Therefore, we can prevent duplicates by finding the first non-blank character and requiring all characters after it also not be blank. I chose to track this by assigning a FLAG column to one of the CTEs and by adding a check to the WHERE clause. This should be more clear after looking at the query. The final query is as follows:

The CTEs are as described above. ALL_CHAR is joined to five times because it includes a row for a blank character. The final character in the string should never be blank so a separate CTE is defined for it, FIRST_CHAR. The extra flag column in ALL_CHAR is used to prevent duplicates as described above. There may be a more efficient way to do this check but there are definitely more inefficient ways to do it. One attempt by me with LEN() and POWER() made the query run six times slower than the current version.

The MAXDOP 1 and FORCE ORDER hints are essential to make sure that the order is preserved in the query. An annotated estimated plan might be helpful to see why the joins are in their current order:

Query plans are often read right to left but row requests happen from left to right. Ideally, SQL Server will request exactly 100 million rows from the d1 constant scan operator. As you move from left to right I expect fewer rows to be requested from each operator. We can see this in the actual execution plan. Additionally, below is a screenshot from SQL Sentry Plan Explorer: 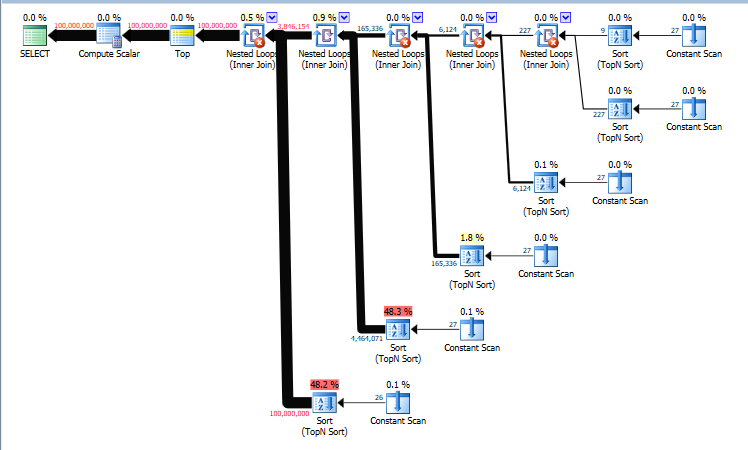 The LOOP JOIN hint is technically unnecessary because a CROSS JOIN can only be implemented as a loop join in SQL Server. The NO_PERFORMANCE_SPOOL is to prevent the unnecessary table spooling. Omitting the spool hint made the query take 3X longer on my machine.

The final query has a cpu time of around 17 seconds and a total elapsed time of 18 seconds. That was when running the query through SSMS and discarding the result set. I am very interested in seeing other methods of generating the data.

On my machine, with SQL Server 2014, your query takes 18 seconds, while mine takes 3m 46s. Both queries use undocumented trace flag 8690 because 2014 does not support the NO_PERFORMANCE_SPOOL hint.

The trick here is to precompute where the diferent permutations start:

The other trick used is to simply use sum to get to the right value instead of trying to concat. To achieve this I simply offset the digits from base 26 to base 256 and add the ascii value of 'A' for each digit. So we obtain the binary representation of the string we're looking for. After that some string manipulations complete the process.

6
Find the first gap in an aggregation of integers in SQL Server
10
Optimising join on large table
8
How can I improve the speed of a query on a 20 million+ row table?
0
How to use and optimize subquery on 100 million rows
0
How can I speed up this query on table with 65 million records
5
Query to convert the count to million or thousands
1
Multiple Non-Indexed Views with INCLUDEs vs. Multiple Indexed Views in High Write Situations
3
speed up PostgreSQL calculations via OLAP warehouse?
6
SQL Server 2019 Performance issue with large INSERT
0
Ensure that SQL server "avoids" the clustered index when a non-clustered index can be used