When using a subquery to find the total count of all prior records with a matching field, the performance is terrible on a table with as little as 50k records. Without the subquery, the query executes in a few milliseconds. With the subquery, the execution time is upwards of a minute.

For this query, the result must:

Records 96 and 95 are excluded from the result, but are included in the PriorCount subquery

Edit 1
In reply to the question of what I can modify on the DB: I can modify the indexes, just not the table structure.

Edit 2
I have now added a basic index on the Address column, but that didn't seem to improve much. I am currently finding much better performance with creating a temp table and inserting the values without the PriorCount and then updating each row with their specific counts.

Edit 3
The Index Spool Joe Obbish (accepted answer) found was the issue. Once I added in a new nonclustered index [xyz] on [Activity] (Address) include (ActionDate), the query times went down from upwards of a minute to less than a second without using a temp table (see edit 2).

With the index definition that you have for IDX_my_nme, SQL Server will be able to seek using the ActionDate column but not with the Address column. The index contains all of the columns needed to cover the subquery but it likely isn't very selective for that subquery. Suppose that almost all of the data in the table has an ActionDate value of earlier than '2017-05-30'. A seek of ActionDate < '2017-05-30' will return almost all of the rows from the index, which are further filtered down after the row is fetched from the index. If your query returns 200 rows then you would probably doing almost 200 full index scans on IDX_my_nme, which means you will read around 50000 * 200 = 10 million rows from the index.

It's likely that seeking on Address will be far more selective for your subquery, although you haven't given us full statistical information about the query so that's an assumption on my part. However, suppose that you create an index on just Address and your table has 10k unique values for Address. With the new index, SQL Server will only need to seek 5 rows from the index for each execution of the subquery, so you'll read around 200 * 5 = 1000 rows from the index.

I'm testing against SQL Server 2016 so there might be some minor syntax differences. Below is some sample data in which I made similar assumptions to the above for data distribution:

I get an index spool. What that means at a basic level is that the query optimizer build a temporary index on-the-fly because none of the existing indexes against the table were suitable.

The query still finishes quickly for me. Perhaps you aren't getting the index spool optimization on your system or there's something different about the table definition or the query. For educational purposes I can use an undocumented feature OPTION (QUERYRULEOFF BuildSpool) to disable the index spool. Here's what the plan looks like:

Don't be fooled by the appearance of a simple index seek. SQL Server reads nearly 10 million rows from the index: 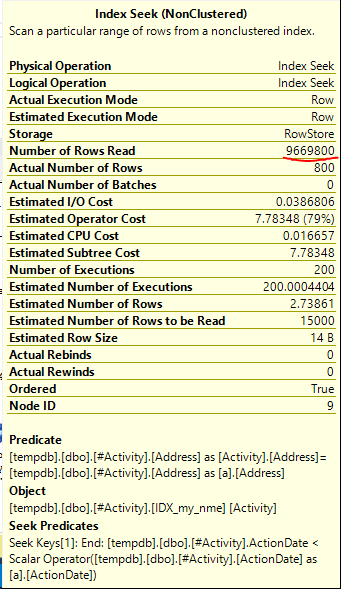 If I'm going to be running the query more than once then it probably doesn't make sense for the query optimizer to create an index each time it runs. I could create an index upfront that would be more selective for this query:

The plan is similar to before:

However, with the new index SQL Server only reads 1000 rows from the index. 800 of the rows are returned to be counted. The index could be defined to be more selective but this could be good enough depending on your data distribution. 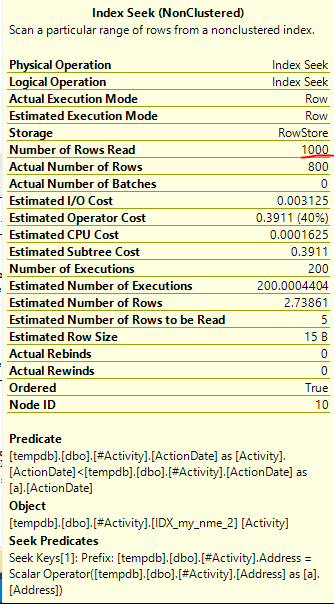 If you aren't able to define any additional indexes on the table I would consider using window functions. The following appears to work:

That query does a single scan of the data but does an expensive sort and calculates the ROW_NUMBER() function for every row in the table, so it feels like there's some extra work done here:

However, if you really like that code pattern you could define an index to make it more efficient:

That moves the sort towards the end which will be much less expensive:

If none of this helps then you'll need to add more information to the question, preferably including actual execution plans.

Not the answer you're looking for? Browse other questions tagged performance subquery azure-sql-database query-performance or ask your own question.

7
MySQL optimization - year column grouping - using temporary table, filesort
2
Indexing for an ascending date value
5
Aggregate sales of the past 12 months for the current row date
0
Full outer join in MySql
3
What is the best index strategy or query SELECT when performing a search/lookup BETWEEN IP address (IPv4 and IPv6) ranges?
1
High performance count with where clause and dynamic data