We are running SQL Server 2014 Enterprise Sp2 with 1.5TB of memory and 64 cores. There is close to 17 GB memory granted to this single threaded query, max memory used is 2.2gb, even though the hash join has plenty of memory available it seems like it's not using it and spilling to disk. Any idea why? Thank you in advance.

Same question posted in SQLPerformance. The Query plan and images are posted there 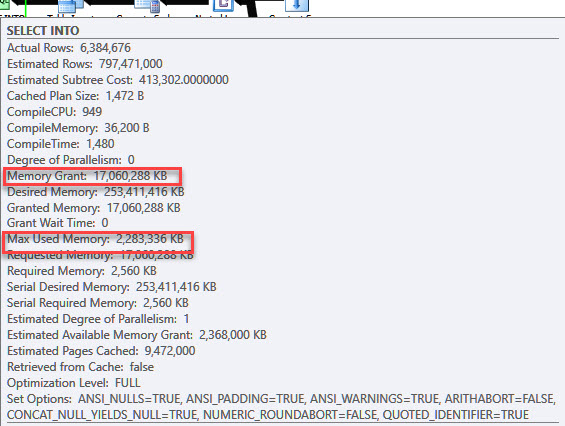 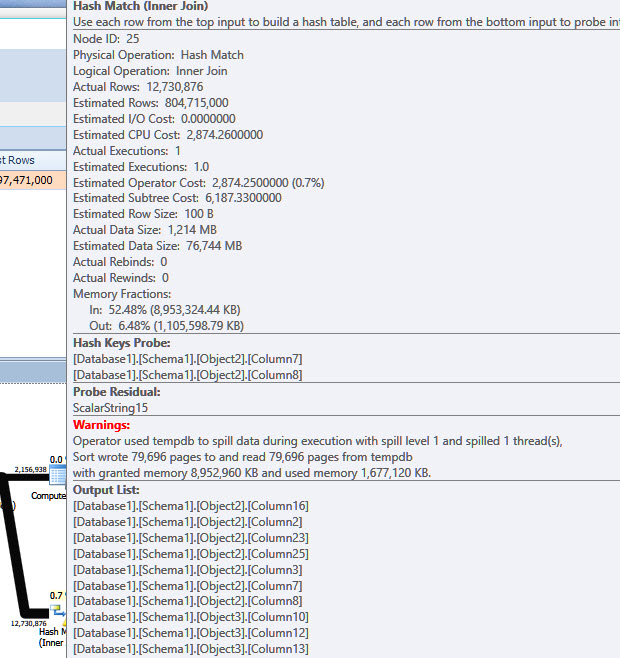 I want to understand the Memory fractions. It shows the hash join has 52.48% of the memory grant (total 17GB+) which is close to 9GB. But the maximum memory used of the plan is a lot less which is 2.2+GB and Hash join is the only spill in this query. Is there something I am missing about the memory fractions, are they not accurate?

sql-server execution-plan memory
Share
Improve this question
edited May 24 '17 at 11:26

The hash inner join shares memory grant with the hash anti semi join during its input phase (while the inner join is reading rows to build its hash table). The sum of the two input memory fractions is 0.524805 (inner join) plus 0.475195 (anti semi join) = 1 (fraction of the whole memory grant).

However this does not mean the hash inner join can consume 0.524805 * 17,060,288KB ~= 8,952,960KB despite what the spill warning text says. This is because the same hash table still exists while the hash inner join is producing rows. During this phase of its execution, it shares memory grant with the Sort at node 11, which is reading rows. This combination of concurrently executing operators is captured by the output memory fraction for the inner hash join.

The fundamental point is that memory grant calculations are proportional to the estimated size of the data (and sometimes the number of unique values). Both row count (cardinality) and average row size are important. If these are wrong, the memory-consuming operator may spill.

All the normal actions appropriate to improving cardinality/density/average row size estimates may be applicable, it is impossible to say from the anonymized plan.

My preference would be to adopt columnstore and batch mode processing. Aside from the usual benefits, it also allows for sorts and hashes to acquire additional memory dynamically (documented and supported trace flag(s) may be required).

Extract of my full answer posted on the copy question at SQLPerformance.com Q & A

The 17GB memory grant is across the entire query. That 17GB isn't given in its entirety to a single operator. Each operator gets a fraction of the overall grant, and that amount is not dynamically reallocated during query execution.

If you go into the query's XML and search for MemoryFractions (or hover your mouse over operators in Plan Explorer), you'll see more information about the fractions assigned to each operator.

It shows the input side of the join gets 52.48%, but not the output side. If you have more memory required for the data coming out of the operator, you'll spill to disk.

To avoid the spill, tune indexes, tune the query, use the new min memory grant hint in 2016, etc.

Not the answer you're looking for? Browse other questions tagged sql-server execution-plan memory or ask your own question.

3
How to determine cause of runtime increase given two query plans with SpillToTempDb warning
4
Memory Utilization
24
Operator used tempdb to spill data during execution with spill level 2
8
Query memory grant and tempdb spill
0
How to manipulate the query plan so that I can have more control on memory grants?
0
Why do two SQL Server instances give different plans for the same query
13
SQL Server Spill level 0 - what is it?
1
Why are those estimates way off?
4
In PostgreSQL, what area in memory does HashSetOp use, work_mem or shared_buffer?