I have such TABLE with data:

the query should gave me a result like this:

I wouldn't use a JOIN. If you would like to look for rows that have a set of columns in common (in your case, all but one), I would just GROUP the rows by the common columns. Then, restrict which groups you want to return (using a HAVING clause):

The min(E) part is just a trick to be "SQL compliant". max(E), or first(E) (for the databases that have it) would do the job as well. As you're choosing just groups with a single row, the min value of a column within the group is the single value there is. In mySQL 5.6 and earlier, leaving E as a column would work as well; although this is not SQL standard and doesn't work in 5.7 (thanks to ypercubeᵀᴹ for pointing the fact that this doesn't work on 5.7).

You can get everything at this SQL Fiddle

You can also take a different approach. Look for rows that literally comply with what you're looking for: that is, it does NOT exist another row with the same A, B, C and D and different E. In this case, use an EXISTS condition in your WHERE clause:

Older versions of MySQL would probably not handle this query too well, because EXISTS conditions are not well optimized. mySQL 5.7 does a decent job; and so do most other databases (Oracle, MS SQL Server, PostgreSQL, ...) . You do need an index on (A, B, C, D, E) (or, at least, (A, B, C, D) to be really performant.

The two queries will not work the same in the case where you have two exact duplicate rows (which I interpret is a case not allowed by your spec). The first one will return no rows, whereas the second one will return both rows.

For your extended case, the second query is your starting point.

Change your equalities with whichever conditions meet your needs.

For instance, if your D columns is a timestamp, and you want to consider that "two times are equivalent if the difference is less than 2 minutes"... then change

The possibility of nulls (that work as "jokers") should be handled with:

If E is nullable, then the comparison is done with

which is mySQL equivalent of (t1.E is distinct from t0.E)

This will give you:

Don't expect this kind of queries to be efficient in realistic scenarios.

Here is my test table: 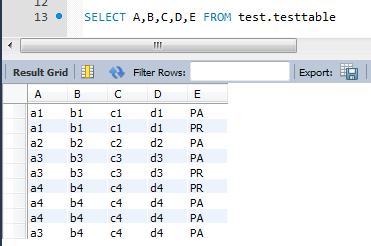 I will give this a try:

Here is the result I got: 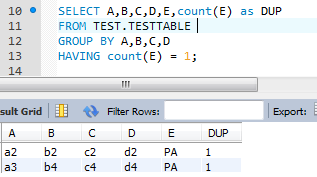 You can remove the Dup column added for demo purpose and use the below query instead:

Not the answer you're looking for? Browse other questions tagged mysql join select or ask your own question.

2
Faster query when joining data from multiple tables
1
Generate a column from different rows in sql
1
MySQL: SELECT with SUM() and COUNT() as new columns
0
Fetch one value from random row where value is not x
1
MySQL - Get maximum Tuple without Grouping everything
0
Select one of multiple columns into a new column Ask Question
0
How can I rearrange these two queries to get the second column from inside the IN()
3
Divide, round and replace in one select statement - tranformation from bytes to GB in SQL Server
0
In mysql, how to add a primary key and a composite key to a table so that it forbids duplicate rows, when there are null values within the columns?