Why would the Parallelism (Repartition Streams) Operator Reduce Row Estimates to 1?

I'm using SQL Server 2012 Enterprise. I've come across a SQL Plan that is exhibiting some behavior I don't find entirely intuitive. After a heavy Parallel Index Scan operation, a Parallelism (Repartition Streams) operation occurs, but it is killing the row estimates being returned by the Index Scan (Object10.Index2), reducing the estimate to 1. I've done some searching, but haven't come across anything that explains this behavior. The query is quite simple, though each of the tables contain records in the low millions. This is part of a DWH load process and this intermediate data set is touched a few times throughout, but the question I have is related to the row estimates in particular. Can someone explain why accurate row estimates go to 1 within the Parallelism (Repartition Strems) Operator? Also, is this something I should be concerned with in this particular situation?

I've posted the full plan to Paste the Plan.

Here's the operation in question: 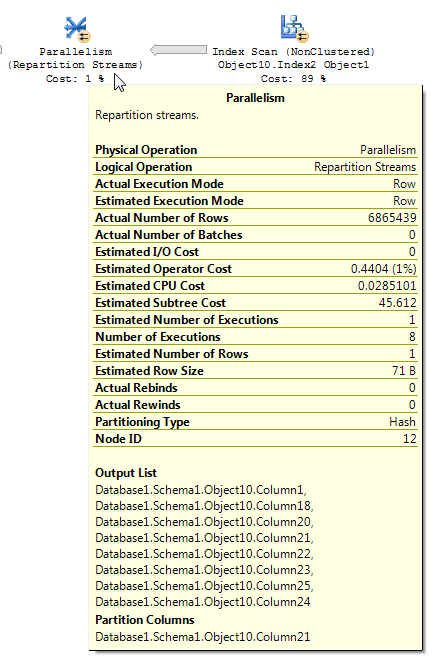 Including the Plan Tree in case that adds any more context:

Could I be running into some variation of this Connect item filed by Paul White (further in-depth explination on his blog here)? At least it's the only thing I've found that seems to be even remotely close to what I'm running into even though there is no TOP operator in play.

Query plans with bitmap filters can sometimes be tricky to read. From the BOL article for repartition streams (emphasis mine):

The Repartition Streams operator consumes multiple streams and produces multiple streams of records. The record contents and format are not changed. If the query optimizer uses a bitmap filter, the number of rows in the output stream is reduced.

In addition, an article on bitmap filters is also helpful:

When analyzing an execution plan containing bitmap filtering, it is important to understand how the data flows through the plan and where filtering is applied. The bitmap filter and optimized bitmap is created on the build input (the dimension table) side of a hash join; however, the actual filtering is typically done within the Parallelism operator, which is on the probe input (the fact table) side of the hash join. However, when the bitmap filter is based on an integer column, the filter can be applied directly to the initial table or index scan operation rather than the Parallelism operator. This technique is called in-row optimization.

I believe that's what you're observing with your query. It is possible to come up with a relatively simple demo to show a repartition streams operator reducing a cardinality estimate, even when the bitmap operator is IN_ROW against the fact table. Data prep:

Here is a query that you should not run:

I uploaded the plan. Take a look at the operator near inner_tbl_2:

You may also find the second test in Hash Joins on Nullable Columns by Paul White helpful.

There are some inconsistencies in how the row reduction is applied. I was only able to see it in a plan with at least three tables. However, the reduction in expected rows seems reasonable with the right data distribution. Suppose that the joined column in the fact table has many repeated values that aren't present in the dimension table. A bitmap filter might eliminate those rows before they reach the join. For your query the estimate is reduced all the way to 1. How the rows are distributed amongst the hash function provides a good hint: 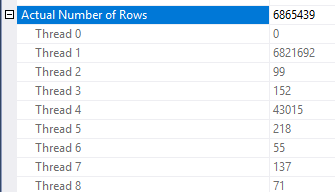 Based on that I suspect that you have a lot of repeated values for the Object1.Column21 column. If the repeated columns happen to not be in the stats histogram for Object4.Column19 then SQL Server could get the cardinality estimate very wrong.

I think that you should be concerned in that it might be possible to improve the performance of the query. Of course, if the query meets response time or SLA requirements then it may not be worth further investigation. However, if you do wish to investigate further there are a few things that you can do (other than updating stats) to get an idea on if the query optimizer would pick a better plan if it had better information. You could put the results of the join between Database1.Schema1.Object10 and Database1.Schema1.Object11 into a temp table and see if you continue to get nested loop joins. You could change that join to a LEFT OUTER JOIN so the query optimizer won't reduce the number of rows at that step. You could add a MAXDOP 1 hint to your query to see what happens. You could use TOP along with a derived table to force the join to go last, or you could even comment out the join from the query. Hopefully these suggestions are enough to get you started.

Regarding the connect item in the question, it is extremely unlikely that it is related to your question. That issue doesn't have to do with poor row estimates. It has to do with a race condition in parallelism that causes too many rows to be processed in the query plan behind the scenes. Here it looks like your query isn't doing any extra work.

The core problem here is a poor cardinality estimation for the result of the first join. This might arise for many reasons, but most frequently it is either out of date statistics or a number of correlated join predicates, which the optimizer's default model assumes are independent.

If you're curious, on a test system, you can disable bitmaps for the query with trace flag 7498. You can also disable optimized bitmaps (considered by the optimizer and affecting cardinality estimates), replacing them with post-optimization bitmaps (not considered by the optimizer, no effect on cardinality) with a combination of trace flags 7497 and 7498. Neither is documented or supported for use on a production system, but they do produce plans that the optimizer could consider normally, and so can be forced with a plan guide.

None of this will solve the core problem of the poor estimate for the first join as noted above, so I am really just mentioning it for interests' sake.

responded to you on Twitter. I looked at the attached XML and see unbalanced parallelism. 1 thread has nearly all of the actual rows whereas most of the others do not. That screams unbalanced parallelism is occurring. Therefore, I'd look into the key/join value and its respective statistics & cardinality.

Per your other idea, I'm not so certain that the Connect item applies, since your pasted plan does not contain TOP anywhere I saw.

Not the answer you're looking for? Browse other questions tagged sql-server sql-server-2012 execution-plan cardinality-estimates or ask your own question.

17
Inaccurate 'Actual' row counts in parallel plan
11
How can row estimates be improved in order to reduce chances of spills to tempdb
3
Low cardinality estimate in hash match operator
2
Histogram Skew on Clustered Index
2
Estimated vs. Actual Row counts in a trivial case
5
Scalar Operator in Seek Predicate and a Row Estimate of 1
3
What's a pathological case where a bitmap filter would not allow the PROBE(Field, IN-ROW) semijoin reduction optimization?
3
Direct values on predicate produce not-so-good plan
11
Why/when does SQL Server evaluate the probe side of an inner hash join when the build side was empty?
3
How to correct row estimates due to join of 2 well-estimated results