I have a very complex query (who hasn't :-)). In this query is a JOIN to a table like this one (of course the original has some more columns):

There are two joins to this table in the query:

Question: Why does it not always use the HASH JOIN? Is there a length limit (per column or sum of all output columns)?

It's important to remember that the query optimizer doesn't choose each join individually and independently from everything else going in on the query. Joins have different properties which means that a different join type may be better or worse depending on other joins or operations in the plan. I can generate test data that shows behavior similar to what you see here, but the reproduction depends on available memory for the server.

Here is the query to test:

If I add d.txt_5k to the SELECT list I naturally get a hash join:

However, if I add d.txt_max to the SELECT list I naturally get a loop join:

The key here is that a loop join preserves the order of the outer table. That means that a nested loop join can avoid an explicit sort for some queries. Queries with a hash join may need to do the sort. The cost of the sort depends on (among other things) the estimated size of the data. The query optimizer estimates the size of the data based on the estimated number of rows and the data types. With the VARCHAR(5000) column I get an estimated size of 27 MB and with the VARCHAR(MAX) column I get an estimated size of 42 MB. On my machine the 42 MB sort is expected to spill to disk so that makes the hash join plan much more expensive than the loop plan for the VARCHAR(MAX) column.

We can see this more clearly by using hints to force the different plans so we can compare them. Here's the comparison for the VARCHAR(5000) query: 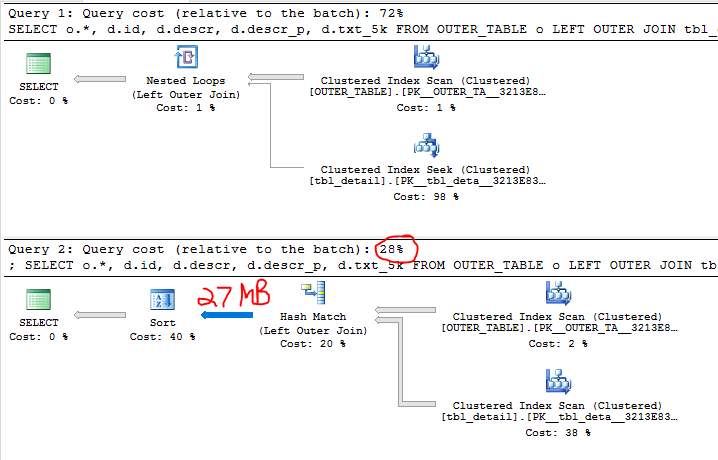 And the comparison for the VARCHAR(MAX) query: 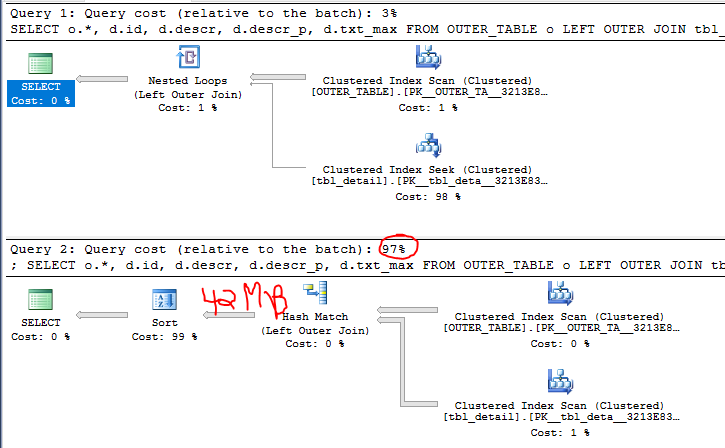 Of course, this may not be why you're seeing the behavior that you're seeing for your particular query. I just wanted to provide an example of why changing a data type could change the join type. I'm going to assume that there's a problem caused by the loop join and that you really need it to be hash join. The OPTION (HASH JOIN) hint may not be a good workaround because it will force every join to be a hash join in the query. The LEFT HASH JOIN hint may not be a good workaround because it implies a FORCE ORDER hint which means that the query optimizer will not be able to change the join order. Perhaps you can move the problematic part of the query to a temp table and apply whatever hints are needed to the smaller query. It's really hard to say much without more information.

You could also try a FORCESCAN hint to encourage the hash join, although I'm loathe to recommend it. Be sure to test carefully:

Not the answer you're looking for? Browse other questions tagged sql-server sql-server-2014 join or ask your own question.

3
How to optimize a very slow query with joins and group by?
0
How many LEFT JOINS make a VIEW unusable?
1
Using Select Statement to get column name and table name from the same table
0
How are block nested loop joins optimised for disk reads?
0
changing from inner joins to left joins to include null values?
3
How to determine index needed to remove hash match from exec plan
6
SQL Server chooses Nested Loop join with dimensional table and make seek for each row