I would need to track a products price changes so that I can query the db for a product price at a given date. The information is used in a system that calculates historical audits so it must return the correct price for the correct product based on the date of purchase.

I would prefer to use postgres in building the db.

I need with the design of the database but any and all best practice suggestions are also welcome.

If I understand the scenario appropriately, you should define a table that retains a Price time series; therefore, I agree, this has a lot to do with the temporal aspect of the database you are working with.

Let us start analyzing the situation from the conceptual level. So, if, in your business domain,

then that means that

The IDEF1X diagram shown in Figure 1, although highly simplified, depicts such a scenario: 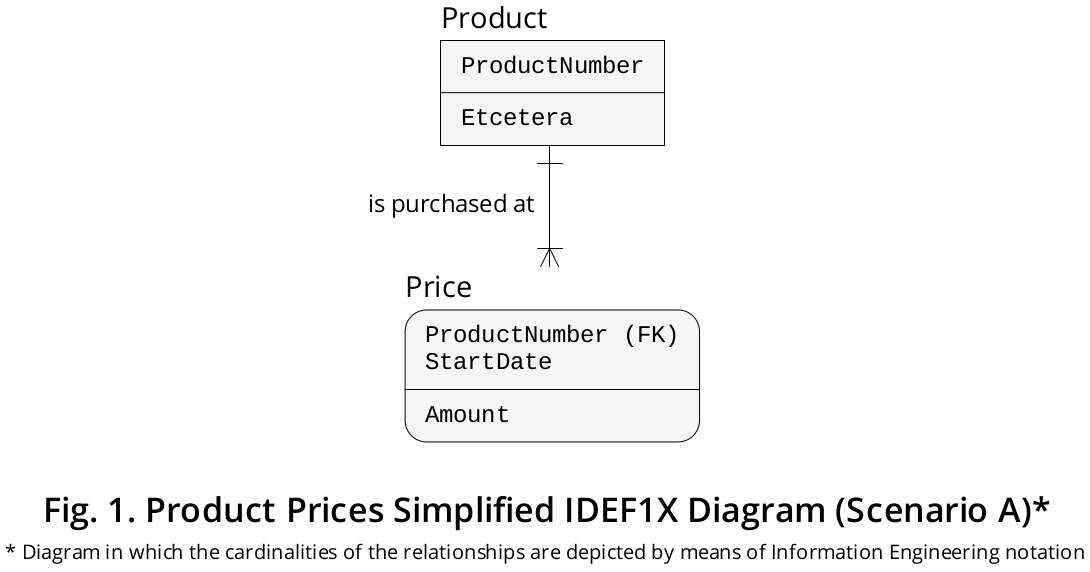 And the following SQL-DDL logical-level design, based on said IDEF1X diagram, illustrates a feasible approach that you can adapt to your own exact needs:

The Price table has a composite PRIMARY KEY made up of two columns, i.e., ProductNumber (constrained, in turn, as a FOREIGN KEY that makes a reference to Product.ProductNumber) and StartDate (pointing out the particular Date in which a certain Product was purchased at a specific Price).

In case that Products are purchased at different Prices during the same Day, instead of the StartDate column, you may include one labeled as StartDateTime that keeps the Instant when a given Product was purchased at an exact Price. The PRIMARY KEY would then have to be declared as (ProductNumber, StartDateTime).

As demonstrated, the aforementioned table is an ordinary one, because you can declare SELECT, INSERT, UPDATE and DELETE operations to manipulate its data directly, hence it (a) permits avoiding the installation of additional components and (b) can be used in all the major SQL platforms with some few adjustments, if necessitated.

To exemplify some manipulation operations that appear useful, let us say that you have INSERTed the following data in the Product and Price tables, respectively:

Since the Price.EndDate is a derivable data point, then you must to obtain it via, precisely, a derived table that can be created as a view in order to produce the “full” time series, as exemplified below:

Then the following operation that SELECTs directly from that view

supplies the next result set:

Now, let us assume that you are interested in getting the whole Price data for the Product primarily identified by ProductNumber 1750 on Date 2 June 2017. Seeing that a Price assertion (or row) is current or effective during the entire Interval that runs from (i) its StartDate to (ii) its EndDate, then this DML operation

yields the result set that follows

As shown, the PriceWithEndDate view plays a paramount role in obtaining most of the derivable data, and can be SELECTed FROM in a fairly ordinary way.

Taking into account that your platform of preference is PostgreSQL, this content from the official documentation site contains information about “materialized” views, which can help to optimize the execution speed by means of physical level mechanisms, if said aspect becomes problematic. Other SQL database management systems (DBMSs) offer physical instruments that are very alike, although different terminology may be applied, e.g., “indexed” views in Microsoft SQL Server.

You can see the discussed DDL and DML code samples in action in this db<>fiddle and in this SQL Fiddle.

This looks similar to work that I did, but I found it much more convenient / efficient to work with a table where a price (in this case) has a startdate column and an enddate column - so you're just looking for rows with targetdate >= startdate and targetdate <= enddate. Of course, if the data isn't stored with those fields (including enddate 31st December 9999, not Null, where no actual end date exists), then you'd have to do work to produce it. I actually made it run every day, with end date = today's date by default. Also, my description requires enddate 1 = startdate 2 minus 1 day. – @Robert Carnegie, on 2017-06-22 20:56:01Z

The method I propose above addresses a business domain of the characteristics previously described, consequently applying your suggestion about declaring the EndDate as a column —which is different from a “field”— of the base table named Price would imply that the logical structure of the database would not be reflecting the conceptual schema correctly, and a conceptual schema must be defined and reflected with precision, including the differentiation of (1) base information from (2) derivable information.

Apart from that, such a course of action would introduce duplication, since the EndDate could then be obtained by virtue of (a) a derivable table and also by virtue of (b) the base table named Price, with the therefore duplicated EndDate column. While that is a possibility, if a practitioner decides to follow said approach, he or she should decidedly warn the database users about the inconveniences and inefficiencies it involves. One of those inconveniences and inefficiencies is, e.g., the urgent need to develop a mechanism that ensures, at all times, that each Price.EndDate value is equal to that of the Price.StartDate column of the immediately successive row for the Price.ProductNumber value at hand.

In contrast, the work to produce the derived data in question as I put forward is, honestly, not special at all, and is required to (i) guarantee the correct correspondence between the logical and conceptual levels of abstraction of the database and (ii) ensure data integrity, both aspects that as noted before are decidedly of great importance.

If the efficiency aspect you are talking about is related to the execution speed of some data manipulation operations, then it must be managed at the appropriate place, i.e., at the physical level, via, e.g., an advantageous indexing strategy, based on (1) the particular query tendencies and (2) the particular physical mechanisms provided by the DBMS of use. Otherwise, sacrificing the appropriate conceptual-logical mapping and compromising the integrity of the data involved easily turns a robust system (i.e., a valuable organizational asset) into a non-reliable resource.

On the other hand, there are circumstances where retaining the EndDate of each row in a time series table is not only more conenient and efficient but demanded, although that depends entirely on business-environment-specific requirements of course. One example of that kind of circumstances comes about when

I have represented said scenario in the IDEF1X diagram displayed in Figure 2. 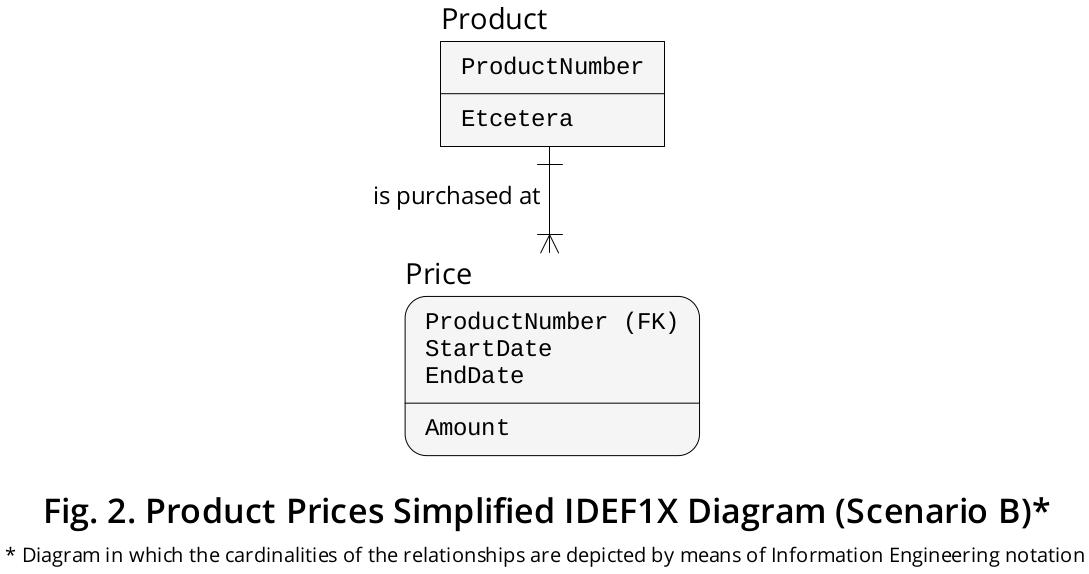 In that case, yes, the hypothetical Price table must be declared in a manner that is similar to this:

And, yes, that logical DDL design simplifies administration at the physical level, because you can put up an indexing strategy that encompasses the EndDate column (which, as shown, is declared in a base table) in relatively easier configurations.

may be used to derive the whole Price data for the Product primarily identified by ProductNumber 1750 on Date 2 June 2017.

I believe you're going to want to look at Temporal Tables. These provide functionality to do exactly what you're looking for and are available in Postgres with the proper extensions.

This concept looks to be pretty DB agnostic as well, as it's offered on a variety of RDBMS platforms.

I gave an answer here that is relatively simple and requires no special extensions to the database (therefore will work with any database).

Not the answer you're looking for? Browse other questions tagged database-design best-practices or ask your own question.

2
Database design: same products in inventory but with different cost
0
How should I store changes to items in the database?
2
Inventory Database Design? Get historical data from DB for reporting & accounting
3
Modeling a database for a printing company
1
What are best practices for storing many iterations of a product in an RDBMS?
0
Database design for product purchase history
1
Type 2 Dimension for a fact measure
0
Save changes of records of products in Azure DB in way that we can see historical data