How can I find out what my SqlServer 2005 CPU is mostly working on?

I apologize if this is somewhat of a rookie question.

After looking online I found some articles that explain how to find the worker time per query using sys.dm_exec_query_stats. e.g.

Is there a way to determine how much CPU is being spent in building the plans, and better yet, a simple breakdown of percent CPU by task (e.g. building plans, executing queries, indexing).

Thank you in advance.

You can use SET STATISTICS TIME ON.

You can get a breakdown of:

You can turn this on in Management studio for all queries or per session. 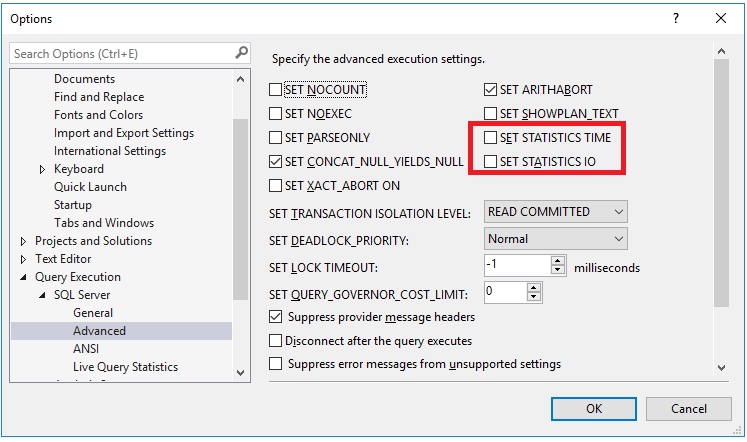 Once you execute the query, process goes through a couple phases :

In the first phase it checks whether your code is correct

Second phase it binds the tables and columns you have provided. Gives you an error of non existing table/column if it fails

In the third phase query is passed to a query optimizer which (assuming you`re not using Query Store feature) checks if it has cached plan, and if statistics are up to date. Depending on result, it can either create a new plan, or use existing one. It can even create a trivial plan, if query is simple enough but that is not a concern right now.

Query optimizer decision making can hardly have any on your query execution because it has certain amount of time to create a plan no matter how complicated the query is, that is why it can create a non optimal plan for non-optimized queries and outdated statistics.

What you can do is use this query to get most expensive queries, and how many times certain query has executed. If number of executions_count of concerning query is not increasing it means it creates a new a plan for it(which mostly happens with ad-hoc queries). Also pay attention on last_logical_reads,elapsed_time,last_rows if it makes sense to have etc 100000 logical reads for result set of 10 rows, in that case you would need to optimize the query, same can be applied for last_elapsed time, if its too long, and you`re having low num of logical reads and rows, check if it contains some sort of scalar function, use UDF instead, and so on.

In summary, try to avoid ad-hoc queries as much as possible, using stored procedures or indexed_views.

Not the answer you're looking for? Browse other questions tagged performance sql-server-2005 or ask your own question.

5
How can I find the VLF count for a SQL 2005 database without running dbcc loginfo?
4
How can I find out which statistics are evaluated by the optimizer?
4
What can cause slow queries with low resource usage?
6
Improve query performance when selecting almost all rows with many "group by" columns
6
CPU Time Slower in SQL Server 2014 than in SQL Server 2008
4
How to find High CPU queries
3
Stored procedure is running slow but it used to perform well
3
How can I find out if a SQL Function can be inlined?
3
Performance considerations regarding Date Vs. Char/Number/Varchar2 in Oracle