Do I understand this relationship correctly? 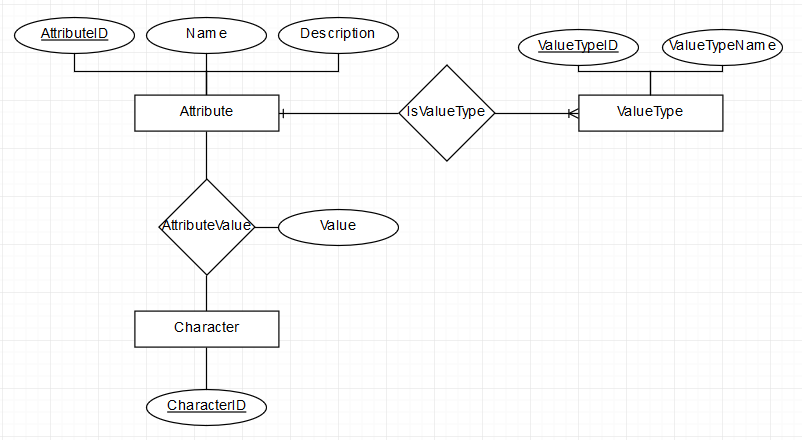 So I made this bit of a diagram and I am not sure if I am going the right way in terms of understanding relationships. A character has attributes (Health, Mana, Power etc.) There are a quite a lot of attributes so I created a table that stores attributes and added a relation of an attribute with a character that has a value, all cool and all. Now for the IsValueType relation it gets more confusing. An attribute has a value type (Percentage, flat value etc.) so I created a IsValueType Relation that relates the attributeID with ValueTypeID, is this a one to many relationship like I drew it or is it a one to one relation ship as one attribute can only have 1 value type and 1 value type can only be linked to the same attribute (An attribute can not have 2 or more value types).

To your specific question:

If a ValueType can be applied to several Attributes, but each Attribute can have only one ValueType, then there is a one-to-many relationship between ValueType (the "one" table) and Attribute (the "many" table); one ValueType row can be attached to many Attribute rows. So, the relationship should go the opposite direction, and the Attribute table would include ValueTypeID, as a foreign key to ValueType.