When i checked sys.dm_os_buffer_descripters in SQL Server there are very less dirty pages, but when i check total size of memory occupied by all databases is 39 GB as shown in below images 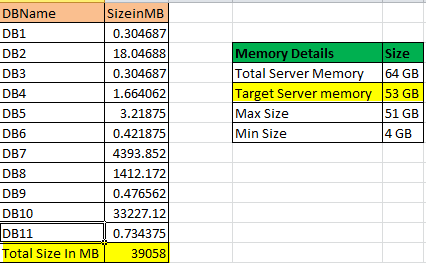 My questions is why and how 14 GB of memory is additionally being occupied by SQL Server and the same i can in resource monitor or performance counter like below image.

Can any one tell me did i miss some thing to check, Total databases are occupying only 39 GB but if i check perfmon or resource monitor it shows that SQL Server is occupying total 53 GB, how 14 GB can be used internally.

From the official documentation on sys.dm_os_buffer_descriptors (Transact-SQL):

You are looking at the data cache usage. But there are more objects in memory than just the data.

You have to consider the plan cache (sys.dm_exec_cached_plans (Transact-SQL)) and other objects.

Returns a row for each query plan that is cached by SQL Server for faster query execution. You can use this dynamic management view to find cached query plans, cached query text, the amount of memory taken by cached plans, and the reuse count of the cached plans.

Memory acquired by cached plans can be retrieved with the following script:

But instead of looking at individual caches, you might want to consider querying the view: sys.dm_os_memory_clerks

Use the following query to see what sys.dm_os_memory_objects (Transact-SQL) are using in RAM.

So while sys.dm_os_buffer_descriptors does provide an overview of the data cahce, you will have to query other sys views to determine the actual current memory usage.

Your SQL Server instance may at one time have occupied 53 GB of RAM, but it is now only currently consuming 39 GB of RAM (in data cache) and more GB in plan cache and memory objects, which may sum up to 53 GB RAM, but which may also sum up to less because of free pages in RAM, that may not yet have been released by SQL Server.

Total will be a sum of Buffer pool and Non-buffer pool usage.

Not the answer you're looking for? Browse other questions tagged sql-server sql-server-2012 memory perfmon paging or ask your own question.