Assuming the above query uses a Hash Join and has a residual, the probe key will be col1 and the residual will be len(a.col1)=10.

But while going through another example, I could see both the probe and the residual to be the same column. Below is an elaboration on what I am trying to say: 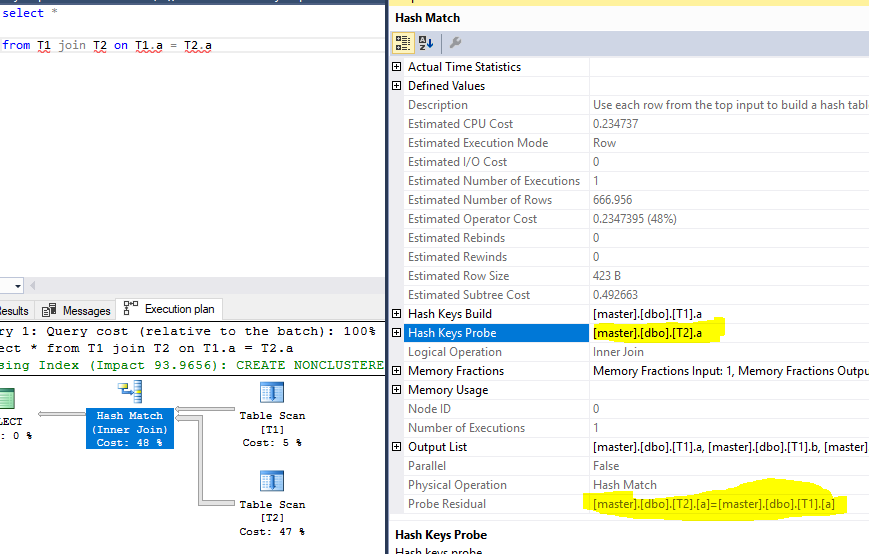 If the join is on a single column typed as tinyint, smallint, or integer* and if both columns are constrained to be NOT NULL, the hash function is 'perfect' – meaning there is no chance of a hash collision, and the query processor does not have to check the values again to ensure they really match.

Otherwise, you will see a residual as items in the hash bucket are tested for a match, not just a hash function match.

Your test does not specify NULL or NOT NULL for the columns (a bad practice, by the way), so it appears you are using a database where NULL is the default.

Not the answer you're looking for? Browse other questions tagged sql-server performance execution-plan database-internals query-performance or ask your own question.

5
Why would SQL cast have to be expensive if used on a join column?
1
DB2 LUW: how to influence query planner's choice of join
1
Identifying Execution Plans with Probe Residual
2
Investigating errors from strange query
3
Implicit conversion causing error part of the time
3
How to determine index needed to remove hash match from exec plan
3
What's a pathological case where a bitmap filter would not allow the PROBE(Field, IN-ROW) semijoin reduction optimization?
4
Reading 300% rows - Problematic execution plan
0
Query tuning update with hash flow distinct operator