I'm designing a database that will store users of varying types. Predominantly (but not exclusively) they will be Actors, Directors and Writers. Currently there are just four user types that are of relevance. There is a outside chance that this number may increase, but the probability is low - and in such a case would be by a very small number.

The plan is to have a users table responsible pretty much solely for logging into the site (name, email and password columns plus one or two others such as whether they've been approved, and updated_at), and additional tables for each of the respective user types that each have their own unique set of columns. Only actors, for example, will have an ethnicity column, only Directors would have a bio column, and only Writers would need to provide their location. However, as I've not managed a database of this complexity before, I'm wondering how to organise a couple of aspects:

Firstly, users can be any one, or any combination, of the above types. So I understand I would need something like (for example) a director_user table with director_id and user_id columns. Would this then be sufficient to be able to filter all users by role type and so on?

Secondly, most users will the option of a twitter profile and phone number. And all actors will have to include at least one URL for any of their other online actor profiles; currently there are three that they can include, but this number may increase. Am I right in assuming that a separate table for each of the possible profiles/contact methods is an optimal way to organise data?

According to my interpretation of your description of the relevant business context, you are dealing with a supertype-subtype1 structure where (a) Actor, Director and Writer are entity subtypes of (b) Person, their entity supertype, and (c) said subtypes are not mutually exclusive.

In this way, if you are interested in building a relational database that mirrors such a scenario accurately —and hence are expecting that it functions as such—, your following comment clarifications are quite significant with respect to the previous points, because they have implications at both (1) the conceptual and (2) the logical levels of representation of the database in question:

I will elaborate on all those aspects and several other critical factors in the sections below.

In order to first define the corresponding conceptual schema —which can be used as a subsequent reference so that you can adapt it to make certain that it meets the exact informational requirements—, I have formulated some business rules that are of particular importance:

Then, I created the IDEF1X4 diagram shown in Figure 1, which groups all the formulations above along with other rules that appear pertinent: 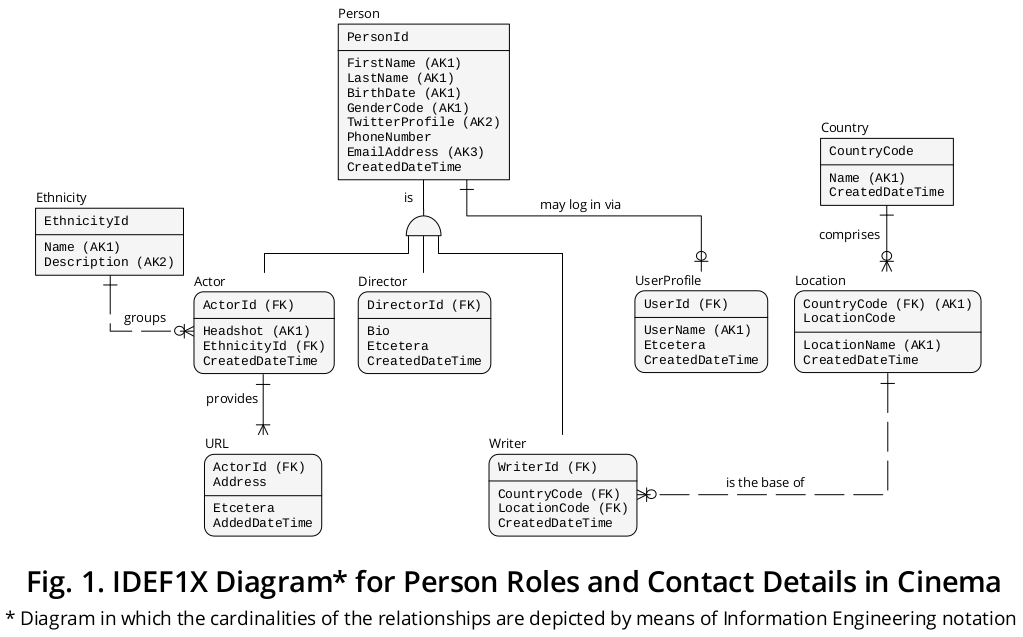 As demonstrated, the Person supertype (i) has its own box, (ii) possesses the properties or attributes that apply to all the subtypes, and (iii) presents lines that connect it with the boxes of every subtype.

In turn, every subtype (a) appears in its own dedicated box, and (b) holds only its applicable properties. The PRIMARY KEY of the supertype, PersonId, migrates5 to the subtypes with the role names6 ActorId, DirectorId, and WriterId respectively.

Also, I avoided coupling Person with the UserProfile entity type, which permits separating all their contextual implications, associations or relationships, etc. The PersonId property has migrated to UserProfile with the role name UserId.

You state in the question body that

And all actors will have to include at least one URL for any of their other online actor profiles; currently there are three that they can include, but this number may increase.

…so URL is an entity type in its own right, and is directly associated with the Actor subtype in accordance with this quote.

And, in comments, you specify that

…then, among other features, I included Headshot as a property of the Actor entity type.

As for the Ethnicity and the Location entity types, they of course may entail more complex organizations (e.g., an Actor may belong to one, two or more different ethnic groups in distinct proportions, and a Writer may be based on a place that requires recording country, administrative region, county, etc.) but it looks like that the needs of your business context are covered successfully with the structures here modelled.

Naturally, you can make as many adjustments as necessary.

Consequently, based on the IDEF1X diagram shown and described above, I wrote the logical DDL layout that is shown as follows (I have supplied notes as comments that explain some of the characteristics that I esteem particularly important with respect to the tables, columns and constraints declared):

This has been tested in this db<>fiddle that runs on MySQL 8.0.

Therefore, (1) every singular aspect of the logical layout above carries a very precise meaning from (2) a singular feature of the business environment of interest7 —in agreement with the spirit of the relational framework by Dr. Edgar Frank Codd—, because:

Having a layout like this is decidedly favourable, as you can derive new tables (e.g., SELECT operations that gather columns FROM multiple tables with the help of the JOIN clause) that —in succession— carry a very precise meaning too (see the section entitled “Views” below).

It is woth to mention that, with this configuration, (i) a row representing a subtype instance is identified by (ii) the same PRIMARY KEY value that distinguishes the row denoting the complementary supertype occurrence. Thus, it is more than opportune to note that

With this logical design, if new subtypes are defined as relevant in your business context, you would have to declare a new base table, but that happens as well when other kinds of entity types are deemed of significance, so said situation would be, in fact, ordinary.

In order to “fetch”, e.g., all the information that corresponds to an Actor, Director or Writer, you can declare some views (i.e., derived or expressible tables) so that you can SELECT directly from one single resource without having to write the concerning JOINs every time; e.g., with the VIEW declared below, you can obtain the “full” Actor information:

Of course, you may follow a similar approach in order to retrieve the “full” Director and Writer information:

The DML views here discussed are as well included in this MySQL 8.0 db<>fiddle so that you can see and test them “in action”.

1 In some conceptual modelling techniques, supertype-subtype associations are referred to as superclass-subclass relationships.

2 Although you mention that there exist in fact more Roles that a Person may perform, but the three you revealed are good enough to discuss the scenario exposing several important ramifications.

3 But, as you noted, in the future an Actor might eventually provide one-to-many URLs.

4 Integration Definition for Information Modeling (IDEF1X) is a highly recommendable modelling technique that was established as a standard in December 1993 by the United States National Institute of Standards and Technology (NIST). It is based on (a) the early theoretical works authored by the sole originator of the relational model of data, i.e., Dr. E. F. Codd; on (b) the entity-relationship view, developed by Dr. P. P. Chen; and also on (c) the Logical Database Design Technique, created by Robert G. Brown.

5 The IDEF1X standard defines key migration as “The modeling process of placing the primary key of a parent or generic [i.e., a supertype] entity in its child or category entity [i.e., a subtype] as a foreign key”.

6 In IDEF1X, a role name is a distinctive label assigned to a FK attribute in order to express the meaning that it holds within the scope of its respective entity type.

8 E.g., appending an additional column with the AUTO_INCREMENT attribute to a table of a database “running” on MySQL.

You should split this across tables like this (only showing the columns needed to present the concept, not necessarily all columns):

This gives you a table full of users with all the various user columns, a table of roles, and a linking table to connect the two together.

You can see that Joe1 is both a writer and director by the entries in User_Roles. And Freddy is both a director and an actor.

This also allows you to add more roles later on without changing the system. Just insert records for Producer or Editor or whatever down the line.

So to find all usernames of actors, you have a couple of choices:

Or if you don't know the role_ID number, then:

Or you can also do this:

(In this version, you could use also use Where r.Role_ID = 3 to get the same results.)

But I'd use the 1st query and whichever WHERE clause I knew. In a big system, knowing the Role_ID will, generally, run quicker than the text, since numeric data is "easier" and more efficient for most SQL engines to process the indexes for.

As for contact methods or pics or whatever, I'd do them in a similar fashion:

...and so on. These would link in the same way as the users to roles.

This lets you add new attributes as time goes on, without rewriting any code; just update the attributes and role_attributes tables to match your new rules. It also lets you share attributes between roles, without re-entering the same data for each user. If two roles require pics, then they only have to upload 1 pic to get that requirement filled.

13
Modeling a scenario in which each Music Artist is either a Group or a Solo Performer
15
How to model an entity type that can have different sets of attributes?
16
Designing a database for a video game business domain with multiple many-to-many relationships
7
How to model a Letter Transportation business context in a database diagram?
3
Parent and Child Relationship with the Same Foreign Table
3
Login system: how is it possible to model multiple user types identified by only one account?
2
Designing a database for a scenario with multiple user types
0
Designing MySQL Database For Two Different User Types (Staff and Client)?
1
Is EAV a good choice for scenario when the number of fields may differ client to client?
-2
About Foreign Keys that is not a primary to other tables
See more linked questions

1
how to add trigger in mysql workbench, without UDF, using EER design
16
Multiple User Types - DB Design Advice
1
Database structure for users, events and event lists
0
Storing multiple types of users and their respective credentials in separate or same table?
2
Is there a standard database layout for repetitive information?
1
Modelling a database for products, categories and features
0
Designing MySQL Database For Two Different User Types (Staff and Client)?
2
Designing a multi-tenant database for a scenario with multiple user types