I have an AWS RDS (MySQL 5.6.35) db.m3.medium that has given me a random error when attempting to modify a table's structure in the past two weeks:

#1041 - Out of memory; check if mysqld or some other process uses all available memory; if not, you may have to use 'ulimit' to allow mysqld to use more memory or you can add more swap space

I've never encountered this error on even a much smaller instance with much less memory. It should be noted that encryption is enabled on this instance, so that might be adding a little bit of load.

When I check the memory statistics in the console, it doesn't appear to be even using anywhere near 100% usage. It doesn't appear that the instance is swapping at all either. After a reboot, I can modify tables fine. This table is very small... < 10 columns, little overhead, and not many rows (<100). Oddly enough, we have not modified the default buffer sizes in RDS (3/4 of instance memory allocation). Not only this, after checking the buffer tables, everything seemed OK as well.

Am I missing something here?

UPDATE: It happened again. Rebooting the RDS server appears to mitigate whatever problem is occurring. Here's a screenshot of buffer statistics at the time of the incident (this is BEFORE the reboot that fixes the problem)... 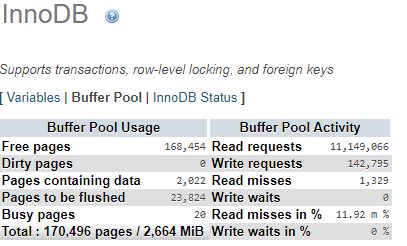 UPDATE 9/1/2017: I thought that we mitigated the issue for a while after we upgraded our RDS instance to m4.large... and for a while, it did. However, while performing some migrations earlier this evening... sure enough, error #1041 - OUT OF MEMORY. I immediately checked our CloudWatch reports for anything out of the ordinary, and our freeable memory is really high, not even concerningly fluctuating. Additionally, a reboot fixed the issue. I have yet to see it happen again, but I'm sure in a few weeks after some transactions it will happen again. Is this possibly a sign of a corrupted database or something? We have NEVER had any issues reading or writing to the database, and all applications are using their databases on this server just fine. We just can't initiate ALTER TABLE changes from inside phpMyAdmin...

I do not believe you are alone here. AWS has push me from 5.7.11 to 5.7.17 and now I am unable to perform Alter table commands when there is any sort of memory pressure on the Database.

Have a look at https://forums.aws.amazon.com/thread.jspa?threadID=251866

Before using 5.7.17 I had used 5.7.11 for some time without issue. If you are able to dump/restore your databases that might be the best option for you, otherwise you can give larger instances a shot.

Since this is db.m3.medium, I see two problems, maybe three

Since RDS is using 75% of the RAM for innodb_buffer_pool_size, this means you only have 960M for the OS. Not a lot of headroom.

PROBLEM #3 : Too many tables in the database

Did you know memory is consumed when you have many tables and columns ?

Questions to ask yourself

I looked at the buffer statistics at the time of the incident you posted.

I hope you are not using innodb_file_format Barracuda. This requires uncompressing pages in the InnoDB Buffer Pool. Larger Buffer Pool would be needed. I wrote about this before:

db.m3.medium only 1 vCPU. That means InnoDB, Encryption, and the OS are all running on 1 vCPU. OUCH !!!

According to your buffer statistics, you have 2664 MB for the InnoDB Buffer Pool

Please do one or both of the following:

Not the answer you're looking for? Browse other questions tagged mysql innodb mysql-5.6 amazon-rds aws or ask your own question.

5
MySQL RDS Instance eating up memory and swapping
1
'Out of memory' Error for MariaDB on RDS
1
AWS RDS many connections cause “lock up”
2
Effect of over allocating shared_buffers
4
AWS Aurora running out of freeable memory and crashing
0
AWS RDS: How do I diagnose this failure?
0
How to get a breakdown of CPU usage at each point in time?
0
Mysqld draining memory, using way more then assigned and not giving any back