How would you implement conversation groups/ locking for multiple users of a Service Broker Queue?

How do you implement conversation groups for multiple users using their own instance of the user applications but sending related messages to the service broker queue? Any good example of this kind of implementation? I had imagined that I could set the conversation group ID myself, guaranteeing that certain groups of messages from various users will be related, but it seems that this value is going to be automatically generated as a UNIQUEIDENTIFIERS... Is this even the best way to do it?

I would like to make sure to catch and lock related messages where two users "on the same team" for instance are bidding on the same item together, so that the server application logic can properly process those related messages together (basically only the first one will be accepted and the second one will be rejected until the user's view can be updated so they know that the other user changed the bid already). 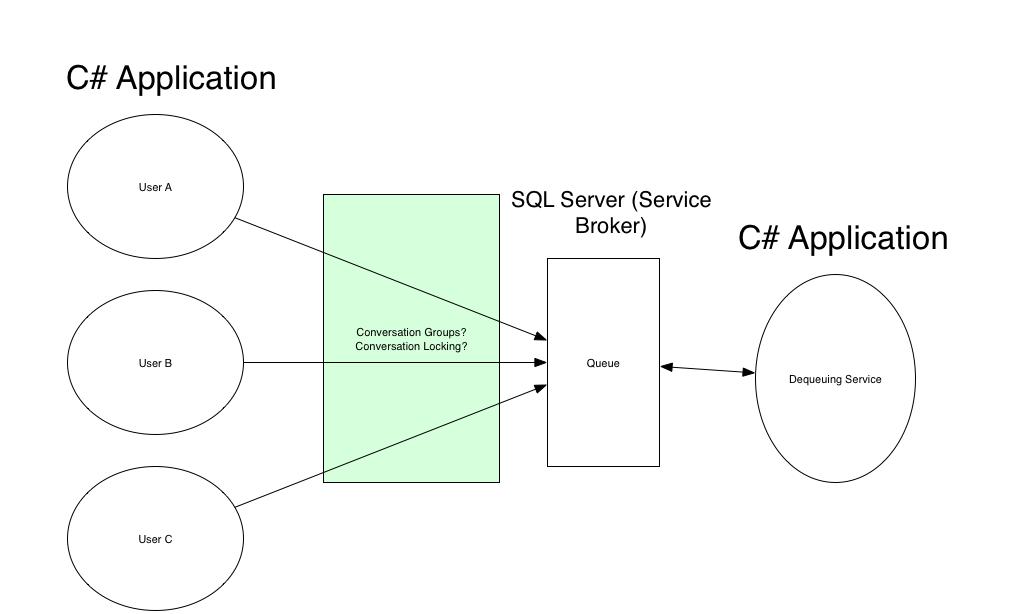 Now obviously anyone will figure that this scheme is flawed: it requires number_of_products X number_of_user conversations, it makes adding and removing products a pain (must maintain all those user conversations!) and so on. One alternative is to multiplex products per conversation. Say the server only starts 10 conversations with each user and the user uses the conversation corresponding to the last digit of the product id (so product 1 goes to conversation 1, but so does product 11 or 101). This is more viable, it requires far fewer conversations, and requires no special conversation management when products are added or removed. You may consider that is a downside that now the server locks not all messages for product 1, but also all messages for product 11, all for 101 etc, but consider this: it only matters if you have more processing threads on the server than the number of conversations per user. If you have 5 threads, then it doesn't matter that you locked 1, 11, 101, there still are messages to process for the other 4 threads. Only if you'd have 11 threads it would matter, since the 11th thread has nothing to process.

Now I'm not advocating to deploy exactly this, I'm just pointing out some possibilities. In most cases the CG locking would be per user, not per product, and adding this extra dimension of using CG locking to avoid concurrency problems on each product is a little unorthodox.

Also, if two different users send bids for product A then there is no guarantee of the order of processing of these bids. However, if the bids for product A end up on the same CG then there is a guarantee that only one 'processor thread' will see both bid from user 1 and bid for user 2, but be careful because there is no guarantee that the bids are presented in the RECEIVE result set in the order they were received. RECEIVE only guarantees that:

but the order of conversations in the result is basically random (is the driven by the conversationhandle ordering, a GUID).

Before I forget: remeber there is the also MOVE CONVERSATION but relying on MOVE (rather than starting conversations directly in the correct CG) is very very very deadlock prone.

Not the answer you're looking for? Browse other questions tagged sql-server sql-server-2008 best-practices c# or ask your own question.

2
Any problem with same conversation handle used by multiple services communicating with one target queue in a multiplexed service broker order queue?
1
Service Broker - A previously existing connection with the same peer was detected during connection handshake.

6
Service Broker & AlwaysOn Availability Groups: Odd Transmission Queue Behavior
5
Looking for example design of using an SQL database as a queue for throttling web service requests of multiple users
2
Any problem with same conversation handle used by multiple services communicating with one target queue in a multiplexed service broker order queue?
7
Recommendations on how to organize Queues in Service Broker
1
Do I need to have two queues for Service Broker?
3
SQL Server Service Broker - CHECKDB found consistency errors, how could this happen?
1
Can we have dynamic SQL jobs in SQL Server Availability groups
10
Service Broker - Conversation Lifetime?