CAP Theorem vs. BASE (NoSQL)

CAP Theorem vs. BASE (NoSQL)

Hi, I’m trying to write a small paper for my work about NoSQL and have described the CAP Theorem as, if not all, then most NoSQL databases adheres to. I later read a paper about the difference between NoSQL and RDBMS which stated that NoSQL databases use the ACID counterpart BASE.

I know the properties of BASE, ACID, and CAP but I’ve a hard time figuring out what relation the CAP theorem and BASE has to each other. As I understand it, the CAP theorem leads to the BASE acronym but is it the right conclusion? Or is it two different approaches to “built” a database around which share some similar properties??

It’s harder to develop software in the fault-tolerant BASE world compared to the fastidious ACID world, but Brewer’s CAP theorem says you have no choice if you want to scale up. However, as Brewer points out in this presentation, there is a continuum between ACID and BASE. You can decide how close you want to be to one end of the continuum or the other according to your priorities.

In another article the author writes:

Many of the NOSQL databases above all have loosened up the requirements on Consistency in order to achieve better Availability and Partitioning. This resulted in systems know as BASE (Basically Available, Soft-state, Eventually consistent). These have no transactions in the classical sense and introduce constraints on the data model to enable better partition schemes (like the Dynamo system etc). A more comprehensive discussion of CAP, ACID and BASE is available in this introduction.

This clearly state that CAP results in BASE.

I hope someone can clarify this to me and remove my confusion..

CAP is basically a continuum along which BASE and ACID are on opposite ends. 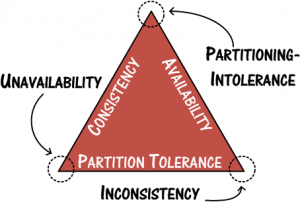 CAP is Consistency, Availability, and Partition tolerance. Basically you can pick 2 of those but you can't do all 3.

ACID focuses on Consistency and availability.

BASE focuses on Partition tolerance and availability and throws consistency out the window.

Not the answer you're looking for? Browse other questions tagged nosql or ask your own question.

34
Timeseries: SQL or NoSQL?
1
Storing dynamic data in NoSQL
1
NoSQL DBs and 2-way synchronization
1
When is running a graph database like OrientDB in cluster mode required?
4
Why Cassandra is not considered a relational database?