I am taking an introduction to database objects course at college.

I am in disagreement with the professor over how to interpret the Crow's Foot Notation for Cardinality in an ERD diagram.

Example: Look at this image (one I pulled from lecture slides): 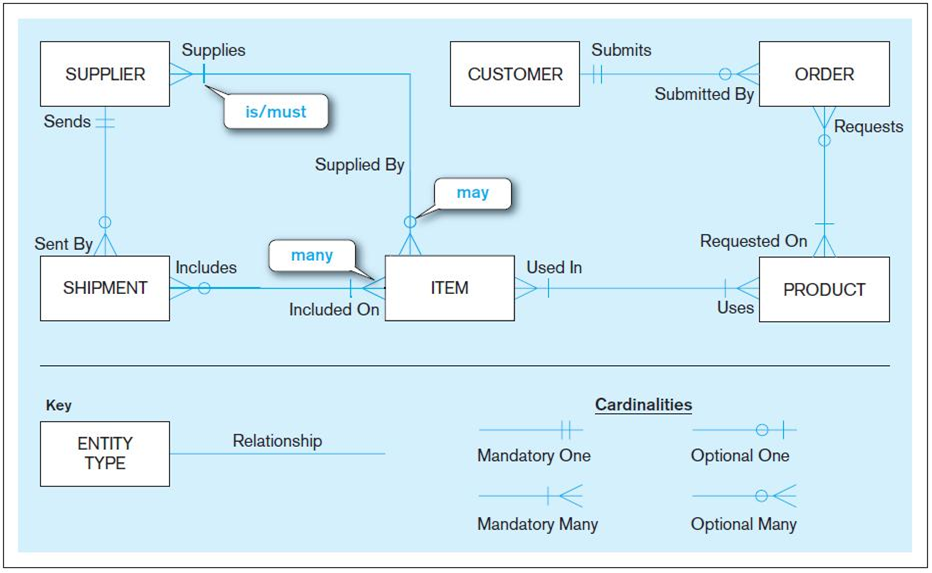 According to my interpretation, this indicates that:

However, according to my instructor's interpretation, this shows that:

I have been unable to find any evidence to contract my own understanding of this... but, again, I'm just a student. Maybe I'm missing something? If I am, I'd like to figure out where I went wrong.

I will say that I have (very rarely) seen people read cardinality the way your professor is doing it. I think of it as "looking down the relationship" at the other side. The fact is that this approach doesn't make sense for readability in my opinion. It's also just not the way the vast majority of people do it.

You're better off to stick with the conventional wisdom on this. If you can't convince your professor, then go with the flow until the end of the semester, but then forget this inappropriate convention and do it the way almost everyone else does from then on.

As an aside/pro-tip: when you see many/optional cardinality, I'd suggest you get in the habit of reading it "zero or more", not "zero or many". I think "zero or many" kind of implies "not 1", which isn't the nature of such cardinality.

14
Would it be considered as a bad practice to have multiple nullable FKs on a table in SQL Server
6
How should I best design the tables and relationships, given the following rules?
4
How to model an “is a” relationship in an ERD using Crow’s foot notation?
5
How do I read ERD Notation (crow's feet) to convert to Natural Language?
0
Using a many-to-many table with a one-to-many relation?
0
Is this correct normalization for my tables?