SELECT TOP 1 from a very large table on an index column is very slow, but not with reverse order ("desc")

We have a large database, about 1TB, running SQL Server 2014 on a powerful server. Everything worked fine for a few years. About 2 weeks ago, we did a full maintenance, which included: Install all software updates; rebuild all indexes and compact DB files. However, we did not expect that at certain stage the DB's CPU usage increased by over 100% to 150% when the actual load was the same.

After a lot of troubleshooting, we have narrowed it down to a very simple query, but we could not find a solution. The query is extremely simple:

PTable has about 500 million rows; EventID is the primary clustered index column (ordered ASC) with the data type of bigint (Identity column). There are multiple threads inserting data into the table at the top (larger EventIDs), and there is 1 thread deleting data from the bottom (smaller EventIDs).

In SMSS, we verified that the two queries always use the same execution plan:

I updated index statistics with fullscan, the problem persisted; I rebuilt the index again, and the problem seemed to be gone for half a day, but came back.

I turned on IO statistics with:

then ran the two queries consecutively and found the following info:

(For the first query, the slow one)

(For the second query, the fast one)

Note the huge difference in logical reads. The index is used in both cases.

Index fragmentation could explain a little bit, but I believe the impact is very small; and the problem never happened before. Another proof is if I run a query like:

Even if I set xxxx to the smallest EventIDs in the table, the query is always lightning fast.

We checked and there is no locking/blocking issue.

Note: I just tried to simplify the issue above. The "PTable" is actually "EventLog"; the PID is EventID.

I get the same result testing without the NOLOCK hint. 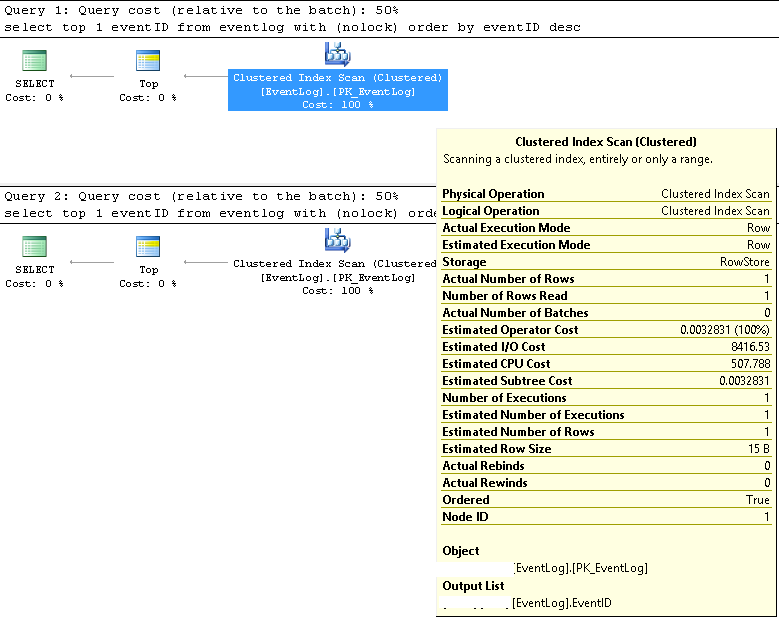 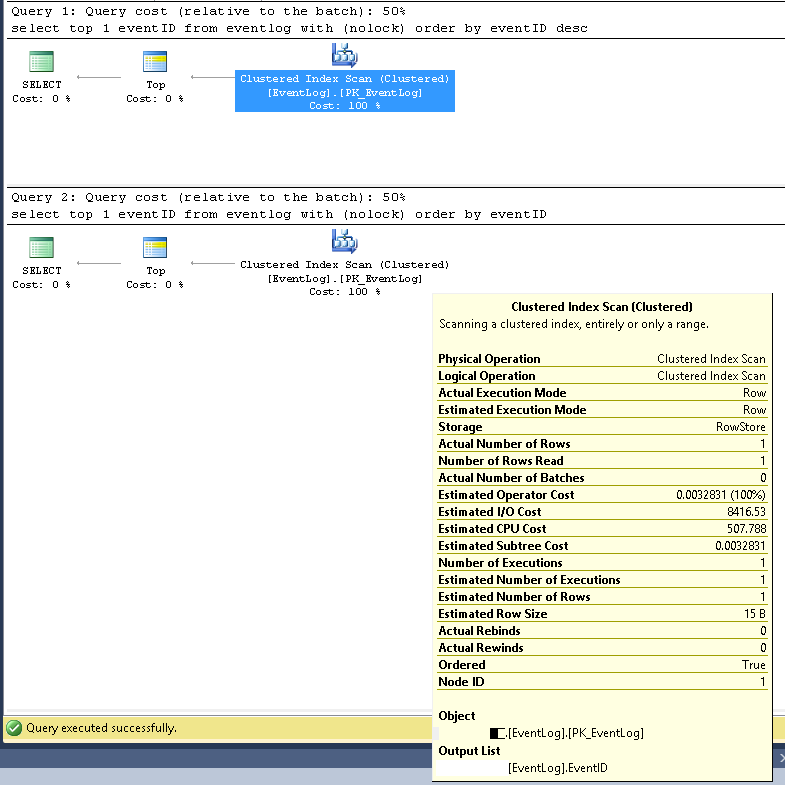 I don't think it matters to provide the create table statement. It is an old database and has been running perfectly fine for a long time until the maintenance. We have done a lot of research ourselves and narrowed it down to the info provided in my question.

The table was created normally with the EventID column as the primary key, which is an identity column of type bigint. At this time, I guess the problem is with the index fragmentation. Right after index rebuild, the problem seemed to be gone for half a day; but why it came back so quickly...? 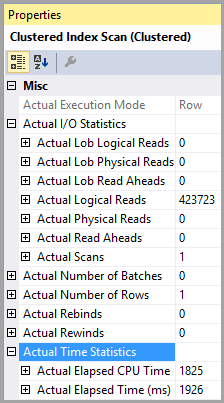 This seems rather a lot to locate the first row in index order.

Most likely your ghost cleanup task is running a long way behind, or has stopped. You should check the ghost_record_count for the clustered index in sys.dm_db_index_physical_stats and monitor changes over time.

The ordered scan from the end of the index that is seeing constant delete activity has to scan over an awful lot of ghosted records before it finds the first 'alive' row to return. This explains the extra logical reads. A seek down the b-tree to the lowest value of the index will encounter much fewer ghosted records.

Another performance-affecting factor is that the scan itself becomes responsible for removing the ghost records as mentioned in Inside the Storage Engine: Ghost cleanup in depth by Paul Randal.

You should check that trace flag 661 (disable ghost cleanup) is not active.

In your specific case:

It turned out the problem was caused by another test database on the same server. That test database was restored with "data loss", and is corrupt. Surprisingly, the ghost cleanup process apparently was stuck in that database. Once we deleted that corrupted database from SMSS, the problem resolved by itself (took a long time and might have caused DB to lockup for a short while).

Not the answer you're looking for? Browse other questions tagged sql-server sql-server-2014 performance select top query-performance or ask your own question.

12
Does MERGE use tempdb?
2
Which of these queries is best for performance?
14
Comparing two queries in SQL Server 2012
1
Procedure showing different duration / reads in Profiler vs. SSMS
8
Query against sys.schemas and sys.synonyms runs very slow for one user
2
Does IMAGE column affect query performance even if it's not included in the query?
4
Aggregation in Outer Apply vs Left Join vs Derived table
4
SELECT from Clustered Columnstore results in LOB Reads
1
SQL Server estimating badly