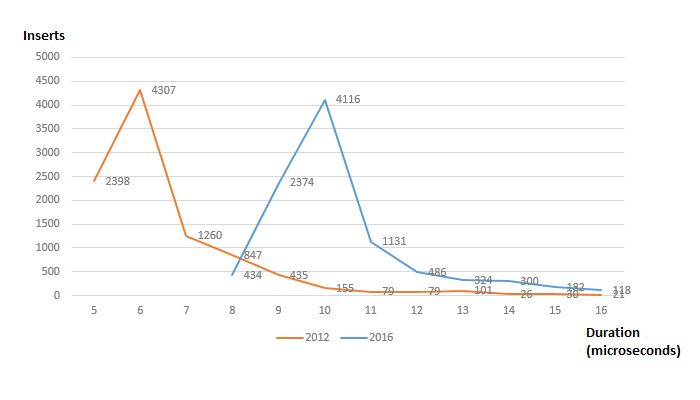 Transaction logs' growth from sys.dm_io_virtual_file_stats is:

During these tests both instances are started. But one test is running only at the one instance each time. I have allocated 8Gb RAM per instance. The query plans are the same. It would be interesting to run each instance on its own box. But probably the one machine is better, because here we have no hardware and enviromnent hidden differences.

Obviously it is very difficult the coincidence of having exactly the same versions in the same server but... I hope my results will help you. I have two different machines configured both Windows Server 2012 R2 Standard. Unfortunately they don't have the same hardware but similar:

And I run 5 times in both machines the same script you have provided and obtained the following average:

What is almost the opposite results that you obtain. Anyway, as you have seen, my 2012 machine has better processor but the hard disk that normally is what shows the difference is the same. So, even if 2012 has better resources is a bit slower for my case.

Can you add (TABLOCK) hint to enable minimally logging ? What is the difference after applying this hint?