In one of our databases we have a table that is intensively concurrently accessed by multiple threads. Threads do update or insert rows via MERGE. There are also threads that delete rows on occasion, so table data is very volatile. Threads doing upserts suffer from deadlocking sometimes. The issue looks similar to one described in this question. The difference, though, is that in our case each thread do update or insert exactly one row.

Simplified setup is following. The table is heap with two unique nonclustered indexes over

and the typical query is

I did small investigation and the following is what I found.

In most of the cases query execution plan is

with the following locking pattern

Since two IX are compatible, but two X are not, the thing that happens under concurrency is

And here the first part of the question arises. Is placing X lock on object after IX eligible? Isn't it bug?

Intent locks are named intent locks because they are acquired before a lock at the lower level, and therefore signal intent to place locks at a lower level.

so, placing X lock on object after IX looks VERY suspicious to me.

with the TABLOCK in place locking pattern becomes

and with the TABLOCKX locking pattern is

since two SIX (as well as two X) are not compatible this prevents deadlock effectively, but, unfortunately, prevents concurrency as well (which is not desired).

My next attempts were adding PAGLOCK and ROWLOCK to make locks more granular and reduce contention. Both has no effect (X on object was still observed immediately after IX).

And here the second part of the question arises. Could it happen that FORCESEEK will be ignored and bad locking pattern will be used? (As I mentioned, PAGLOCK and ROWLOCK were ignored seemingly).

Adding UPDLOCK has no effect (X on object still observable after IX).

However. Additional observation. In the original setup even with FORCESEEK(IX_Cache(ItemKey))) in place, if one change @itemKey variable declaration from varchar(200) to nvarchar(200), execution plan becomes

see that seek is used, BUT locking pattern in this case again shows X lock placed on object after IX.

My understanding (correct me if I'm wrong) is that locking is situational in a great degree, and certain execution plan shape does not implies certain locking pattern.

The question about eligibility of placing X lock on object after IX still open. And if it is eligible, is there something that one can do to prevent object locking?

Is placing IX followed by X on the object eligible? Is it bug or not?

It looks a bit odd, but it is valid. At the time the IX is taken, the intention may well be to take X locks at a lower level. There's nothing to say that such locks must actually be taken. After all, there might not be anything to lock at the lower level; the engine cannot know that ahead of time. In addition, there may be optimizations such that lower level locks can be skipped (an example for IS and S locks can be seen here).

More specifically for the current scenario, it is true that serializable key-range locks are not available for a heap, so the only alternative is an X lock at the object level. In that sense, the engine might be able to detect early that an X lock will inevitably be required if the access method is a heap scan, and so avoid taking the IX lock.

On the other hand, locking is complex, and intent locks may sometimes be taken for internal reasons not necessarily related to the intention to take lower level locks. Taking IX may be the least invasive way of providing a required protection for some obscure edge case. For a similar sort of consideration, see Shared Lock issued on IsolationLevel.ReadUncommitted.

So, the current situation is unfortunate for your deadlock scenario, and it may be avoidable in principle, but that's not necessarily the same as being a 'bug'. You could report the issue via your normal support channel, or on Microsoft Connect, if you need a definitive answer on this.

Could it happen that FORCESEEK will be ignored and bad locking pattern will be used?

No. FORCESEEK is less of a hint and more of a directive. If the optimizer cannot find a plan that honours the 'hint', it will produce an error.

Forcing the index is a way of ensuring that key-range locks can be taken. Together with the update locks naturally taken when processing an access method for rows to change, this provides enough of a guarantee to avoid concurrency issues in your scenario.

If the schema of the table does not change (e.g. adding a new index), the hint is also enough to avoid this query deadlocking with itself. There is still a possibility of a cyclic deadlock with other queries that might access the heap before the nonclustered index (such as an update to the key of the nonclustered index).

This breaks the guarantee that a single row will be affected, so an Eager Table Spool is introduced for Halloween protection. As a further workaround for this, make the guarantee explicit with MERGE TOP (1) INTO [Cache]....

My understanding [...] is that locking is situational in a great degree, and certain execution plan shape does not implies certain locking pattern.

There is certainly much more going on that is visible in an execution plan. You can force a certain plan shape with e.g. a plan guide, but the engine may still decide to take different locks at runtime. The chances are fairly low if you incorporate the TOP (1) element above.

It is somewhat unusual to see a heap table being used in this way. You should consider the merits of converting it to a clustered table, perhaps using the index Dan Guzman suggested in a comment:

This may have important space reuse advantages, as well as providing a good workaround for the current deadlocking issue.

MERGE is also slightly unusual to see in a high-concurrency environment. Somewhat counter-intuitively, it is often more efficient to perform separate INSERT and UPDATE statements, for example:

Note how the RID lookup is no longer necessary: 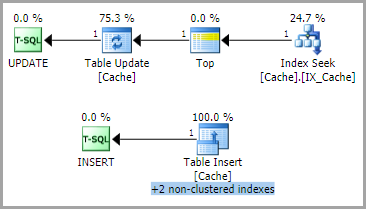 If you can guarantee the existence of a unique index on ItemKey (as in the question) the redundant TOP (1) in the UPDATE can be removed, giving the simpler plan:

Both INSERT and UPDATE plans qualify for a trivial plan in either case. MERGE always requires full cost-based optimization.

See the related Q & A SQL Server 2014 Concurrent input issue for the correct pattern to use, and more information about MERGE.

Deadlocks cannot always be prevented. They can be reduced to a minimum with careful coding and design, but the application should always be prepared to handle the odd deadlock gracefully (e.g. recheck conditions then retry).

If you have complete control over the processes that access the object in question, you might also consider using application locks to serialize access to individual elements, as described in SQL Server Concurrent Inserts and Deletes.

Not the answer you're looking for? Browse other questions tagged sql-server execution-plan deadlock merge or ask your own question.

6
how does SQL Server know to lock view objects?
24
Merge statement deadlocking itself
11
SELECT/INSERT Deadlock
4
SQL Server 2008 query planner failing after index drop & recreate
5
PAGELOCK Conversion Deadlock From Update to Intent Exclusive
0
Why are these two INSERTs deadlocking? Is it the trigger? What does this deadlock trace 1222 log tell me?
10
Overcome MERGE JOIN(INDEX SCAN) with explicit single KEY value on a FOREIGN KEY
3
A methodology for tracing a query that sporadically runs for hours instead of seconds
0
Data locking question