We have one particular SQL Server which is intermittently timing out when accepting connections. The issue is consistent throughout the day, but occurs at a very low incidence. How can I continue to troubleshoot?

Connection Timeout Expired.  The timeout period elapsed while attempting to consume the pre-login handshake acknowledgement.  This could be because the pre-login handshake failed or the server was unable to respond back in time.  The duration spent while attempting to connect to this server was - [Pre-Login] initialization=0; handshake=15002;  (Microsoft SQL Server, Error: -2)

Test Script (executed once per second):

Update: I finally got a client-side Wireshark trace of a failed connection. No packet loss is apparent, client receives TCP ACK's in real-time (<10ms). Client was using DNS name at time of failure, but failure does occur using the IPv4 address in the connection string. 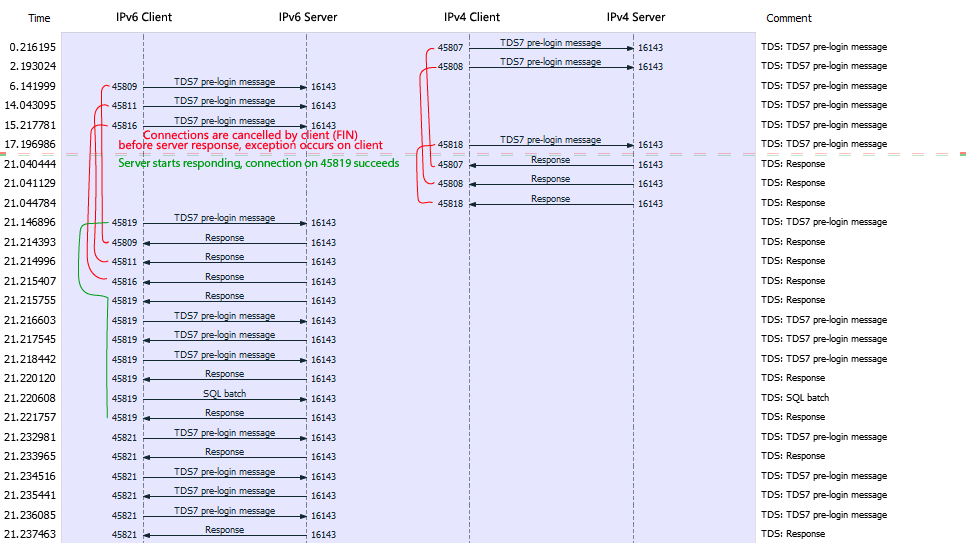 Am I correct in thinking that the fact that I get immediate TCP ACK's to the pre-login request packets sent would localize the issue to the OS or SQL Server?

This was eventually identified as a side-effect of VMWare LRO. Disabling host-based LRO resolved the issue. See

Not the answer you're looking for? Browse other questions tagged sql-server sql-server-2016 connectivity vmware or ask your own question.