The server is a Windows Server 2012 R2 and is running NET Framework 4.6.1 (some posts point to older version of .NET framework causing this problem, but this is not my case).

I tried to run the following packages to see if this would fix...

... None of these were necessary, and nothing helped...

Has anybody experienced this? Any ideas or suggestions?

One Update 24 hours later I inspected the SQL Server error log looking for entries that include only a Start, 5 failed login attempts and a stop. From all the messages in that time-frame (107 entries in total) the only message that includes anything like an error is

This message though… has been reported on server startup even before I applied the patch so I am 100% confident that it is a red herring. No logs are inserted in the SQL Server error log as a result of the failed login attempts.

Based on suggestions I got from people here, I downloaded and installed the latest version of SSMS (17.3) on the server. When I tried connecting this time, I got a different error so it seems I'm moving further, but I'm not there yet.

So it seems that it is true that old versions of SSMS do target .net 3.5 and even if you have newer versions of the .net framework the client connections will not work, the question is now why is that I still get this "No process is on the other end of the pipe", even when most of the client components have been updated.

Some more things I have investigated (and discarded) 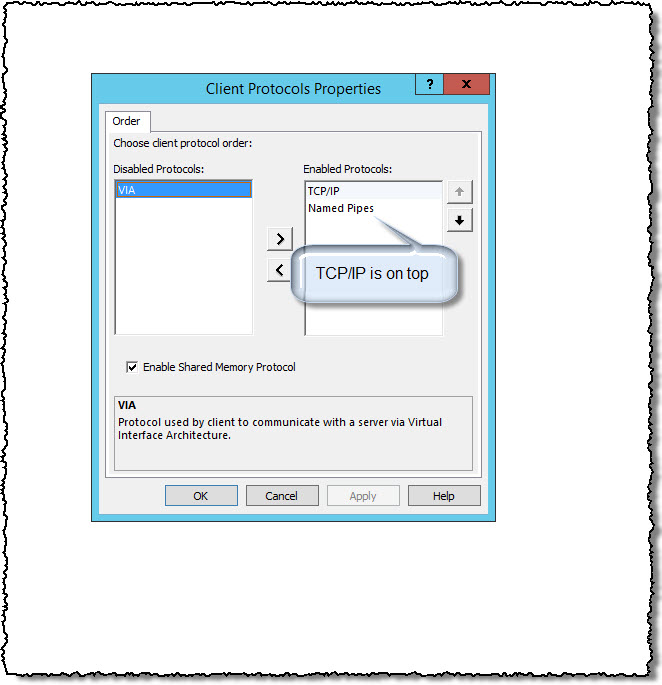 Finally! after 3 days of trying everything under the sun I found the root cause of my problem.

The aha! moment was when I got together with a group trying to understand why this patch was deploying just fine in other servers while not in this particular one.

We noticed that something different (among other things... that we listed in a neatly organized notepad) was that this SQL Server 2008 R2 was configured for encryption in transit (a.k.a. SSL encryption) via certificates and some settings on SQL Server Configuration manager namely:

So we started to think... what if the problem is the certificate itself?. Then we went ahead and remove the encryption configuration (the patch for SQL Server Build 10.50.6542 still applied) and the connection started working, confirming that the combination of the patching plus our SSL configuration was bonkers.

After more investigation and via a process of elimination, we narrowed down the problem to the certificates we were using. The certificate was created back then with makecert (to create a self signed certificate) and was NOT using the -a parameter. This parameter tells makecert what Hash algorithm to use. If not provided, makecert will use the default MD5 signature hash algorithm which is not compatible with TLS 1.2.

Also on the TLS 1.2 RFC you can see that explicitly…

I'm writing all these since the whole conundrum took me 3 days to figure out and I hope some day someone is going to be benefited from this. If only Microsoft would have included in BIG BOLD letters that MD5 is no longer supported right in the article where the patch is described!

TLS 1.2 wasn't made the default security protocol until .NET 4.6 and wasn't even a supported option until .NET 4.5 so if you are using a client that targets a .NET runtime of less than 4.5 it won't be able to communicate using TLS 1.2 by default.

In your specific scenario, the client happens to be SQL Server Management Studio. Versions of management studio up to and including 2014 used .NET 3.5 SP1 as the target runtime - which unfortunately will prevent you from connecting using TLS 1.2 as is.

To remedy your problem, upgrade your installation of management studio to the latest version as this targets .NET 4.6.1 and will use TLS 1.2 as the default security protocol.

A second solution, if you are unable to update to the latest version of SSMS, is that you can make some registry changes that will force Windows Server to ignore the protocol specified by .NET 3.5 and to use TLS 1.2 instead. I would recommend against this (and if you can't update SSMS you are probably not likely to be allowed to change registry settings) but I have included the information for completeness.

Details on how to force .NET 3.5 to use TLS 1.2 and which registry keys need to be changed can be found below:

Not the answer you're looking for? Browse other questions tagged sql-server patching tls-1.2 or ask your own question.