I am at the end of my rope troubleshooting a remote SQL Server connection problem. I am a DBA but not a networking expert.

Certain information below has been sanitized using "x" in place of a letter.

I have access to a remote Windows 2008 R2 server through RDP. I connect to this server with the address jxxxxxx.sxxxx:5000. This succeeds.

Using this RDP connection I installed MS SQL Server 2014 Express on the server. This has been upgraded to SP2 Cumulative Update 8. I used the checkbox to install a default, unnamed instance. Using SQL Server Management Studio from the server I can connect to and use this new instance.

I have already performed the following configuration steps:

On my home computer I opened SQL Server Management Studio 2017 and attempted to connect with jxxxxxx.sxxxx. I am unable to connect, receiving the error message below:

To troubleshoot this I have gone to extremes:

I have no more ideas and I need help. Is there some way that my connection string is wrong, or could be incorrect for some network environments? The Server is not in a domain and is named Oxxxxxxx, if that helps...

Something else you can have a look at is whether the TCP protocol for SQL Server is listening on the correct IP address(es). You can do this from SQL Server Configuration Manager.

Go the same screen where you enabled the TCP/IP protocol, in your case SQL Server Configuration Manager > SQL Server Network Configuration > Protocols for MSSQLSERVER and right-click on TCP/IP. Once the new screen loads, click on the IP Addresses tab, and you will see something similar to this: 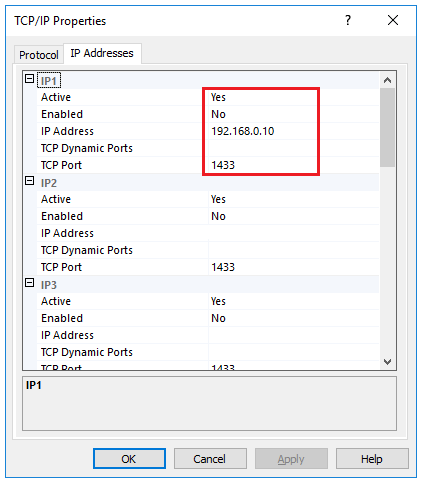 The IP that you are connecting to remotely should show up in one of these fields (e.g. IP1, IP2, etc.). To find out what the IP you are using resolves to, run the following in a cmd session:

By default SQL Server listens on all addresses, but in some cases, the default isn't used and addresses need to be explicitly added. Note that if you are using NAT or port-forwarding, you might not see the external IP, in which case you will need to work with your network administrators to make sure the translation or forwarding address is correct.

The solutions is provided in the error message you are receiving on your "local" computer.

...the important bit possibly being:

In the SSMS connection window perform the following steps to force a TCP/IP connection: 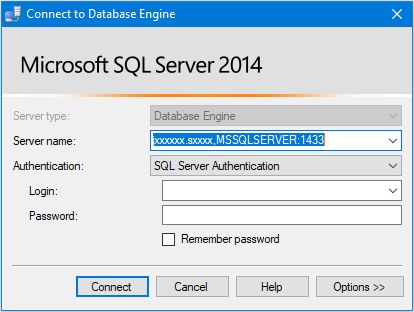 Enter your Login and Password for a SQL Server Authentication login or select Windows Authenticated from the pull-down menu to login using your windows account. 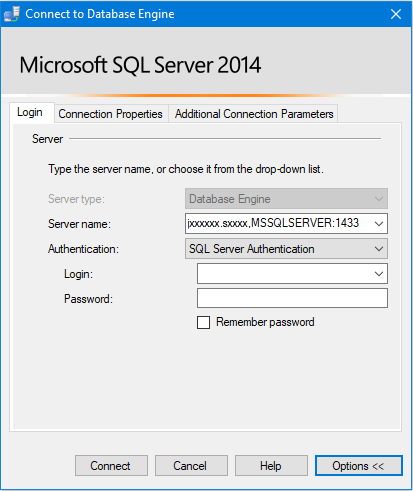 CAUTION
Possible cause of errors here: Not in an Active Directory environment and trying to login with a "domain" or "local" Windows account.

In the Network section of the Connection Properties change the Network Protocol to TCP/IP. 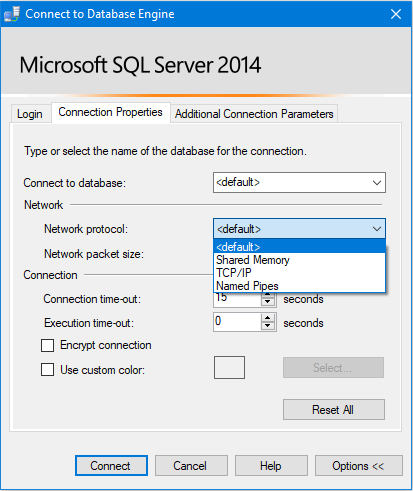 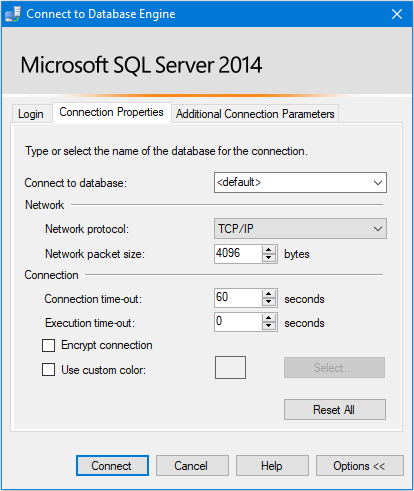 Click on OK to connect to your SQL Server instance via TCP/IP.

If this doesn't work, then you may have additional issues with the network connection.

Not the answer you're looking for? Browse other questions tagged sql-server connectivity or ask your own question.