Using the Save Results As option, shown below. CSV looks good!

But when Excel opens/imports it:

How do I get a query to a clean excel file (a real xls/xlsx) without dancing? (We like everything to actually in the SQL file itself... I wish we could do "SELECT INTO FILE:C:\SQLOUTPUT\DATA.XLS ...")

First, make sure you've got the query options set up the way you want.

Go to the Query menu, and choose Query Options: 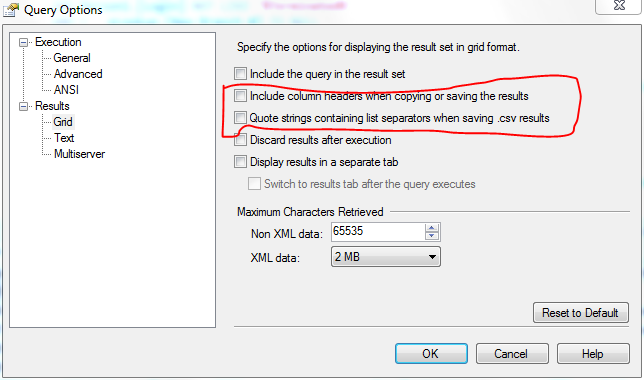 The first of the two highlighted options tells SSMS to include the column headers in your CSV file. The second tells SSMS to put single quotes around columns that include a comma.

I suspect you've already done this, but thought I should mention it for completeness.

If this isn't sufficient to get your data into a format Excel will correctly interpret, my next step might be (as noted in the comments) to use the Import/Export Wizard to generate a SSIS package that does this. However, the wizard does not always get the quoting correct - in particular, it can put things in double quotes, but won't "double up" the double quotes embedded in the string.

Generally at that point, I resort to brute force.

I create a modified query that:

If I'm going to use the query regularly, it'll include a sortOrder column (set to 1), and be UNION ALLed with a SELECT that creates the header row. I then wrap the UNION ALLed queries (making them a subquery), so I can select just One_Big_Column, and sort by sortOrder.

You can see this run here.

Note: If you're formatting the CSV manually, you'll probably want both of the check boxes noted above turned off.

I was having same trouble with field and limiting the length of the output didn't help at all because it has to do with the carriage returns.

Before you run the data you want output to Excel, change your query on those free text fields to deal with those returns:

Once I did that, Excel output was as expected. This is the link that got me moving correctly.

The only real answer that works without dancing is: Use SSIS

I wanted to avoid SSIS, because I like simple SQL. Simple SQL is:

I can do the whole thing in five to twenty minutes and be done. I can also replicate it to multiple SQL Servers easily.

I would have loved to use SQL#, (have long wanted an excuse to use it!) but it lacks native excel export functionality, and I have to fight some fires today, so can't screw around learning it.

When I have to chain pieces together, like SSIS , SQL Agent, etc, it is 1 or more hours of tinkering, and will all fall apart when we move SQL Servers (which we do every 16-24 months). Pieces are bad.

But I am stuck w pieces for this one.

Pity. I expect SQL Server could be stronger, at a meta level.

It's not SQL Server fault, nor SSMS'.

Excel by design open CSVs in the wrong way possible, it's been a well known issue for years now. You can even easily export a CSV file from Excel which is then not opened correctly by the same Excel.

The only solution with CSV and Excel is to not double click the file or use Open command from inside Excel (otherwise it will decide on its own to devastate them), but instead opening an empty worksheet and use Import->Import from text. With that, you can tell it how to manage every different column.

Use TOAD For SQL Server. The free version includes export to excel, even after the trial expires.

Not the answer you're looking for? Browse other questions tagged sql-server ssms export excel or ask your own question.