I am evaluating PostgreSQL as an alternative to Oracle. I have a database with 533 Tables which contain up to 250,000 entries.

For a performance comparison, I built the datbase both on Oracle and PostgreSQL.

However, PostgreSQL is much slower, and it doesn't store much in RAM and instead has huge Disk I/O.

Below is the performance I measured (average of 5 runs): 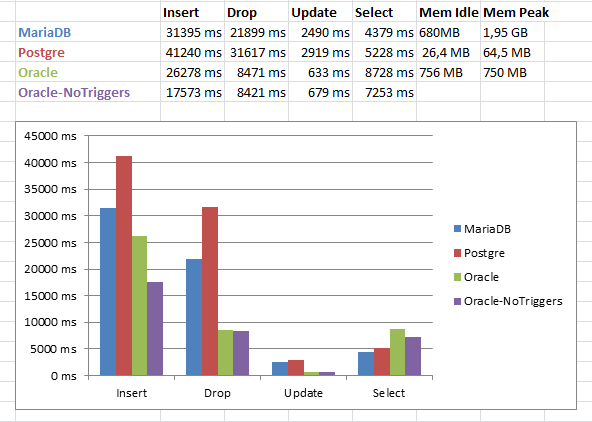 The NoTriggers version ran with an ALTER TABLE x DISABLE ALL TRIGGERS.

As seen in the Chart, PostgreSQL does not really use the available ram. Looking into the resource monitor, it is indeed using high disk io:

What I have tried so far:

None of these had any impact on either Disk IO or Memory Usage, nor the Performance.

What am I missing? Is there a flag I missed? Is windows just so bad as a host for PostgreSQL?