How do I format the output from OBJECT_DEFINITION so that it looks the same as sp_helptext?

for example in the code below I create a stored procedure:

using sp_helptext I get a nice view of the source code: 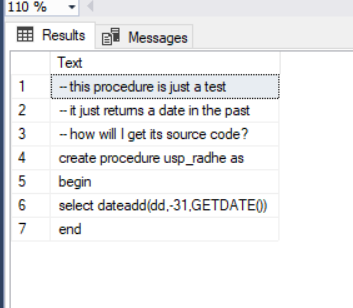 using object_definition I get the source code in a single line and that is not good for me:

For MSSQL Server 2012 you can use a recursive function. E.g.:

I had similar problem. First turn on this option of SSMS - it is turned off by default:

Close SSMS, and run it again to get it work.

I use this query to get the full text of object definitions:

I like to display LEN of the sp text, so that I am sure it is not cropped.

K, so this is how sp_helptext does it. Wrap the results are a table function returning rows for CRLF characters returned by the object_definition.

Since you're using SQL Server 2016, you can use STRING_SPLIT and a trick from Aaron Bertrand to split on carriage-return/line-feed.

With the release of SSMS 18.2 on 2019-07-25, a new option became available. The option itself has existed for a long time, but with a change made in this release it became viable to use for the purpose requested here.

The specific change was increasing the number of characters retrieved when using "Result to Text" (by 8x). The documentation states (emphasis mine):

Allow more data to be displayed (Result to Text) and stored in cells (Result to Grid). SSMS now allows up to 2M characters for both (up from 256 K and 64 K, respectively). This also addressed the issue of users not able to grab more than 43680 chars from the cells of the grid.

Now the following displays as expected in "Results to Text":

By default, the results are "column aligned" and "include column headers". With this combination of options, a line of dashes is used between the column headers and the results. The problem is that being column aligned, the dashes extend the full amount of what that column could possibly retrieve, which is likely to be 2,097,152 dashes (i.e. 2 MB worth). SSMS doesn't like super long lines and freezes for a second when scrolling up for that line to be in view.

You can get rid of that line by changing either (or both) of those two aforementioned options: either uncheck "Include column headers in the result set" and/or set "Output format" to "comma delimited". If you want these changes to be the new defaults (i.e. be remembered for next time), then you need to make the changes by going to Tools -> Options -> -> Query Results -> SQL Server -> Results to Text. If you want the changes to only be temporary, then right-click in the query editor tab/window, select "Query Options..." and go to Results -> Text.

I don't remember what the default value for "Maximum number of characters displayed in each column" was, but if it's not 2097152, then I suggested making that change the new default (i.e. via the "Tools" menu).

If the code is truncated due to being more than 2,097,152 bytes (characters in most cases), then a) yikes!, and b) use the XML method described below.

If you don't mind an extra line at the very top and very bottom that should be ignored, you can use the following to display the full text, as text and not as a result set:

If you execute the T-SQL shown above, you will get back a one row, one column result set of an XML value. Click on the underlined XML value and it will open up in a new tab showing the full, properly formatted text (along with a first line of <Code><![CDATA[ and a final line of ]]></Code>):

Depending on the size of the item you are "displaying", you might need to increase the SSMS setting for how much XML data it pulls down (else you might see truncated results). Go to:

If the goal is to get back the original code with the line breaks, you can just query from the source (sys.sql_modules) with the datagrid output configured to retain line breaks.

Not the answer you're looking for? Browse other questions tagged sql-server sql-server-2016 scripting metadata or ask your own question.

11
STRING_SPLIT with a multiple-character separator?
8
How to output more than 4000 characters in sqlcmd
0
why my split string functions are not working with large OBJECT_DEFINITION?

2
How can can I get object definitions stripped of all comments?
3
Sp_helptext Error
11
Handling exceptions in stored procedures called using insert-exec blocks
0
Oracle GoldenGate add trandata errors
1
Why does OBJECT_ID return NULL in a computed column?
0
why my split string functions are not working with large OBJECT_DEFINITION?