What does GRANT CONTROL on a schema do in MSSQL?

What is the GRANT CONTROL supposed to do, if you have to run these two additional commands to allow the user to create a table in a specific schema?

This description is nice, but what kind of a use case can I run that can confirm (with success or failure) the GRANT CONTROL command physically affected the user's security on the database with and without this schema, before and after running the command?

CONTROL permission: The CONTROL permission can be used to easily grant all permissions on an entity to some principal. It's the next best thing after ownership of the entity, but it's not quite as powerful as ownership. The main difference is that a grantee of CONTROL can still be denied some other permissions on the entity. For example, I can be granted CONTROL on a table, while at the same time I can be denied SELECT on that table, preventing me from selecting from it - this can never happen to the owner, because the owner cannot be granted or denied permissions.

Here is what you'll get: 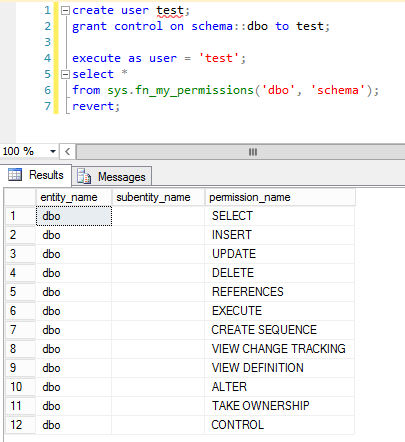 When you want to CREATE TABLE you should open BOL article CREATE TABLE (Transact-SQL) and scroll down to PERMISSIONS:

Now you see that even if your table is not supposed to have columns of CLR user-defined type, you still need CREATE TABLE permission to grant to your user to make him be able to create a table.

Test user has already ALTER SCHEMA implied by CONTROL on schema, but CREATE TABLE should be granted (as well as REFERENCE permission in case of CLR user-defined type).

Not the answer you're looking for? Browse other questions tagged sql-server permissions security table access-control or ask your own question.

2
GRANT CONTROL SERVER when user may be an entity owner
3
Deny dbo schema permission
3
In the context of another principal what permissions hinge on the identity of the database owner?
1
SQL Server Grant CRUD to Users on One Schema
1
How to grant permissions to allow anything inside a SQL Server schema?
0
User cannot select from table when having SELECT permissions if CONTROL is denied
0
ALTER permission on database allows creation of security principals