How to set cache on windows 10 pro 64bit machine

When running Mongod I get the following WARNING: The file system cache of this machine is configured to be greater than 40% of the total memory. This can lead to increased memory pressure and poor performance. This is on a windows 10 pro 64 bit machine. I have 16 gigs of ram. I have a 225 gig ssd drive c: and 2 1 terabyte drives d: and e:

The mogod reference says the following:

Could someone provide directions on how to do that? The answer from @Md Haidar Ali Khan does not work

@DCR, As MongoDB 3.6 officialy released as on dated 5th December 2017. For Testing environment i have deployed MongoDB 3.6 in my environment. There is two new things i got in MongoDB 3.6 , which i have noticed. When we are starting the mongod server

Even in my Environment the test system setup configuration is

To accommodate the additional consumers of RAM, you may have to decrease WiredTiger internal cache size.

@DCR, Even in my environment i am also getting the same message after running the mongod server. It's nothing but a cache warning message which comes from wiredTiger storage engine. I am also uploading the screen shot below 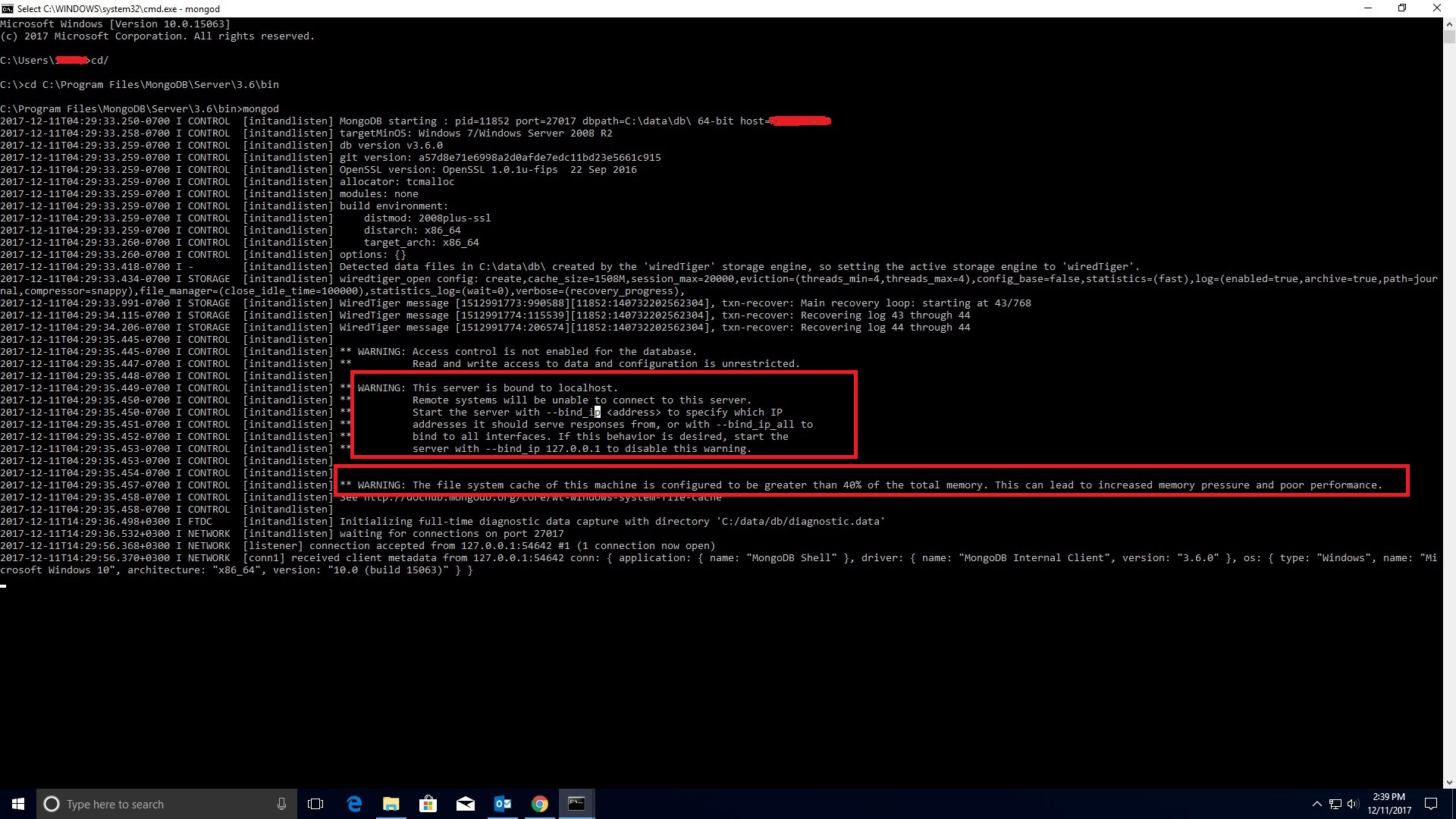 As per MongoDB jira Blog Add warning about Windows SystemFileCacheSize for WiredTiger Some MongoDB users on Windows have switched to enabling direct_io because the file system cache on Windows is greedy by default and can lead to content in allocated memory getting swapped out - which leads to terrible performance. Windows provides the SetSystemFileCacheSize API that allows limiting the amount of memory that can be used by the file system cache. The setting is global across the computer. We could add code into MongoDB that calls the API, and limits the amount of memory the file system cache can use to a percentage of available memory. The call should only be done for storage engines that have a cache management layer. MMAP relies on the file system cache using all available memory - limiting how much memory is available would hurt MMAP users.

For further your ref Here , Here and WiredTiger storage engine

Not the answer you're looking for? Browse other questions tagged mongodb cache mongodb-3.6 windows-10 or ask your own question.

1
How to avoid warning with file system cache in mongodb?

1
how to use mysql temporal cache tables
3
Running MongoDB and SQL Server on the same host- memory pressure
0
Clear cache in Windows
1
How to open a sharded MongoDB (without replica set) environment on my dev machine?
1
How to avoid warning with file system cache in mongodb?
9
SQL dumping all pages from buffer cache every few minutes
2
Can we set the fixed size for both plan cache and data cache?
1
Reset mongo cache memory for test perfomance - windows