Where can I download an old version of PostgreSQL for Windows? [closed]

Ask Question
Asked 2 years ago
Active 2 years ago
Viewed 4k times
2
Closed. This question is off-topic. It is not currently accepting answers.

I need version 8.4 for a legacy system, but EnterpriseDB (the official link) only shows 9.x

On the PostgreSQL FTP Mirror I see the 8.4.22 binary, but only have binary for solaris: 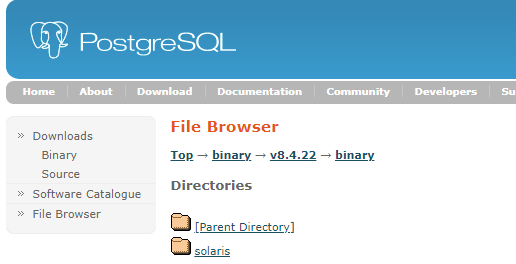 For good reason PostgreSQL 8.4 ceased being supported at July 2014. Moreover, PostgreSQL doesn't host compiled versions for Windows, and Enterprise DB likely doesn't want to incur the liability of hosting packages known to be insecure. Even AS-IS it becomes a question of reputation.

If you must have 8.4 feel free to download the source and compile or to seek out a consultant,

PostgreSQL for Windows can be built using MinGW, a Unix-like build environment for Microsoft operating systems, or using Microsoft's Visual C++ compiler suite. The MinGW build variant uses the normal build system described in this chapter; the Visual C++ build works completely differently and is described in Chapter 16. It is a fully native build and uses no additional software like MinGW.

As others have pointed out,

However, whether or not you want to trust oldapps.com or oldversion.com is another question. I certainly wouldn't.

You could always use Linux to bring yourself up to a recent version and then dump it and load it in a version supported by Windows and hosted by EnterpriseDB.

Not the answer you're looking for? Browse other questions tagged postgresql windows installation postgresql-8.4 or ask your own question.