Is my DB design alright or not?

Quick dscription of a problem

first of all I am still learning so please be understanding. Recently I've come across a post where someone was proposing nice schema for storing recurring events. I found it interesting and decided to expand that for learning purposes. But I endded up with a "circular" schema that really freaks me out. Let's look at that through the prism of appointment system (let's say to a doctor).

Presentation of my approach 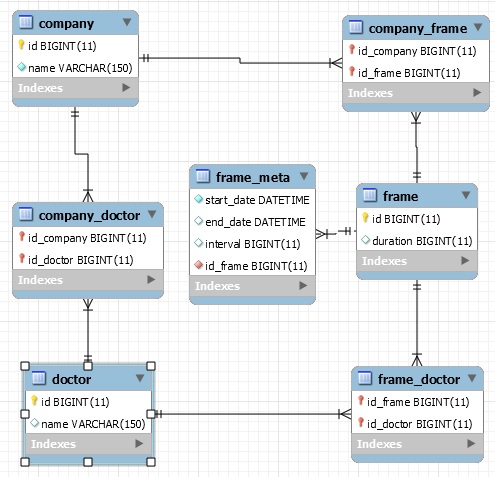 Frame - a range in time when an event occurs. F.e. an appointemnt in a company calendar might be an event, that is represented by a row in the frame table. It's possible to create a repetitive frame that happens f.e. every monday.

Doctor - obviously a person that can be assigned to a given frame (appointment) and company.

Corrected design (according to review in an answer): 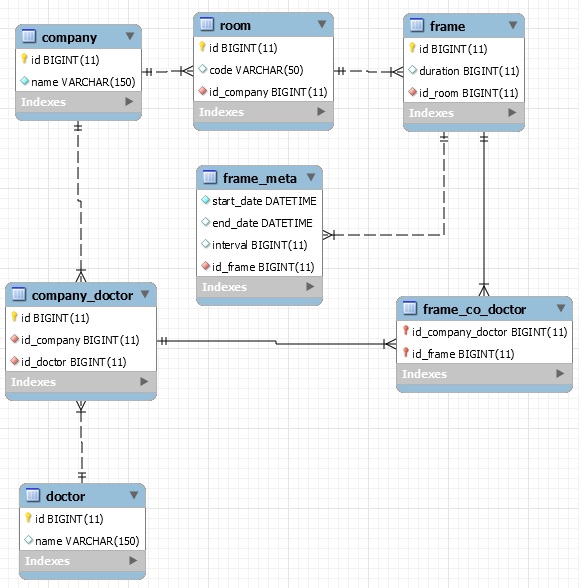 I understand that a frame represents one (or more) intervals, as established by a company.

I believe you originally intended a frame to be a block of time, and to allow multiple companies to use it. The potential problem with that is - what if one company needs to alter that frame? You basically have to create a second frame, and migrate over only the references for the one company to the old frame. This is possible, but would be a maintenance hassle (and would slow things down while you did it).

I also note that a frame can include multiple time intervals, and repeating time frames (allowing, I assume, you to set up weekly standing "appointments" where appropriate). If a frame represents a specific event (even if that "event" is a recurring weekly appointment, or a five-day conference), this shouldn't be a problem; If multiple events are re-using the same frame, then the maintenance issue mentioned above would grow even worse.

If a frame belongs to just one company, you don't really need the company_frame table; you can have the company_id in the frame table directly.

NOTE: One specific clinic may have many rooms, and many doctors, each of whom may have different appointments at the same time. It may be worthwhile to add another distinguishing factor to a frame - perhaps a location ("Room 2" in a doctor's office; "Conference Suite 100"; whatever's appropriate) to help differentiate. In some cases, it may be sufficient to use the doctor and the time interval (in a doctor's office, "Dr. Cameron, 15:00 - 15:30, 2018-03-23" should be distinctive); in other cases, you might need something more.

The next thing that comes to mind is the potential for data consistency issues. This is where the "circular" design comes into play.

Presumably, if a given doctor stopped working for company X, he would no longer be tied to the frames belonging to that company; he might still be connected to frames owned by other companies, though. And, company_doctor and frame would both have the company_id, making it easy to verify that the correct records are being linked - if company_doctor.company_id <> frame.company_id, then you shouldn't create the frame_co_doctor row.

Those are the biggest potential issues I see with the design as it stand now, and how I'd resolve them, based on what I know of your requirements. I may, of course, have misunderstood a requirement, or there may be some you haven't noted as yet, that would invalidate these approaches, but they're the way I'd look at it.

Not the answer you're looking for? Browse other questions tagged database-design schema or ask your own question.

1
How wrong is my web app modeling schema?
3
How to design relationships for variant data?
5
database schema design for school system
2
Multiple Database Design or NOT?
0
Database design Problem for the web-app
0
Design for periodic data cuts
0
How could I improve my DB design?
1
Single-Table vs. Multi-Table design