how to find the database context of the last sql statement?

I would like to find out from the code below, what was the name of the database where the last command was run.

In this case I am looking for my_other_database.

his there any way of finding this? Is there any DMV that I should be looking at for this info?

Also, what if the update was wrapped in a dynamic sql, would it be possible to track it then? 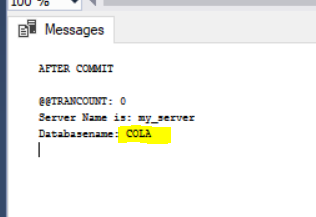 but on the example below, although I was technically inside database cola, the statement was apcore.upl.applicationDocument, apcore is another database.

is there a way to print out apcore, instead of cola?

Ad hoc queries execute in the Database that was either logged into, or mostly recently changed to via a USE statement.

Queries running within a Stored Procedure or Function execute in the Database in which the module they are contained in exists.

Executing the above should return the following:

You can sometimes get the Database ID from the following query, but not always:

The documentation states, regarding the value of the returned dbid field:

For ad hoc and prepared SQL statements, the ID of the database where the statements were compiled.

However, my testing shows that it appears to be NULL if the last statement was ad hoc.

Ah, but I just saw a note stating:

Unfortunately, you cannot get a plan_handle from either sys.dm_exec_connections or sys.dm_exec_sessions. You can get it from sys.dm_exec_requests, but rows are only there when a session is executing a query. Once the query is over, that row is not in that DMV anymore. And if you use that DMV to get the value for your current session, then it will always be the Database that you are currently in since the query will be the one you are executing to find the Database, in which case you might as well just select database_id from sys.dm_exec_sessions or use the built-in DB_NAME() and DB_ID() functions (without passing in any parameters for them).

[i]n the example below, although I was technically inside database cola, the statement was apcore.upl.applicationDocument, apcore is another database.

Yes, those are two different databases, but I think you are misunderstanding what is going on here. That statement referenced a single object. But consider a multi-object query:

Now there are two databases referenced, neither one of which you are in.

If there is a trigger on that table, or if the query uses the OUTPUT clause, or if you have Snapshot Isolation enabled, then tempdb is also involved.

The only context that actually exists is the DB that you are currently in.

And in terms of modules (stored procedures, triggers, functions, and views), the context is the DB in which they reside, regardless of where they are called from.

There are two exceptions for modules, however:

The context of this script is my_database. It's just that the query references objects in a different database. Consider a scenario where a single query uses objects in multiple databases. Which database would you want returned?

What are you trying to accomplish?

Not the answer you're looking for? Browse other questions tagged sql-server t-sql sql-server-2016 dynamic-sql dmv or ask your own question.

6
How do these snapshot isolation level configurations interact on a SQL Server 2005 instance?
4
Half of a transaction completes, when the other half fails?
1
How to find statement executed by sp_executesql in [sys].[dm_exec_query_stats]?
1
Query execution time is random, need to identify the root cause
0
duplicate key error creating unique index on temp, SQL Server 12.0.5589 bug?
2
Is it possible to override a ReadCommittedSnapshot isolation level with ReadCommitted isolation level for a particular transaction?
1
Why do update statements degrade when in a transaction?
0
Query optimizer triggering statistics update seems to be slowing down queries