The situation: a trigger exists on a table in sq202, which should insert a row in the sq009 DB when a row is inserted in the sq202 DB. However, I get this error in Sage 500 dialog when the record is inserted:

Both servers have the other as a Linked Server; both have all connections being made using a specified security context; both have the server option Enable Promotion of Distributed Transactions for RPC set to False.

I have confirmed the Distributed Transaction Coordinator service is running on sq009, and set its permissions appropriately I believe (even though I understand this shouldn't be needed): 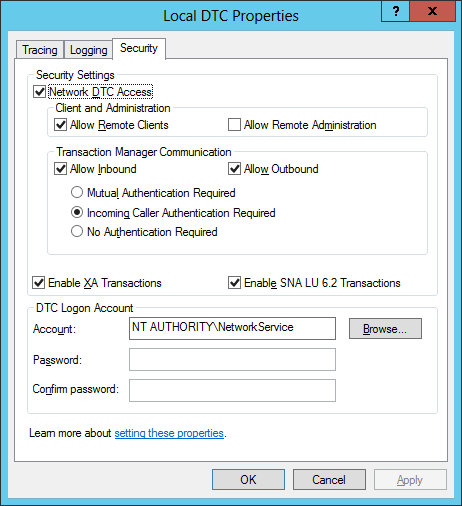 but sq009 still is apparently complaining.

Helpful information on T-SQL Distributed Transactions and the requirements: https://technet.microsoft.com/en-us/library/ms191156(v=sql.105).aspx

Not the answer you're looking for? Browse other questions tagged sql-server sql-server-2012 distributed-databases distributed-transactions or ask your own question.

8
How can I enable distributed transactions for a linked server?