I have a big query (Entity Framework generated one) and I'm using a Calculated Field. Performance has already improved by adjusting the Clustered Index to include the [On] (datetime) column.

The sort on the calculated function is responsible for 100% of the performance slowness according to the Query Plan.

The function estimated the order of the item and ranks it according to the votes/comments it received and gives newer items a higher ranking. So the score changes every hour + every vote on item/comment (similar to Reddit).

In short, this is what it ranks by

The problem is, when I sort by [On], I have immediate results. When I sort by the mentioned calculation, it takes 12-16 seconds.

How would I improve this?

Edit: I didn't think it was useful to post the query, because it's created by EF and very big (also for Stackoverflow, see this pastebin )

You shouldn't do this kind of sorting in SQL Server, you should do it in your application. Here's why:

When you need to order data that doesn't have an index that supports the required sort order, your query will do all the work at runtime with a Sort operator. 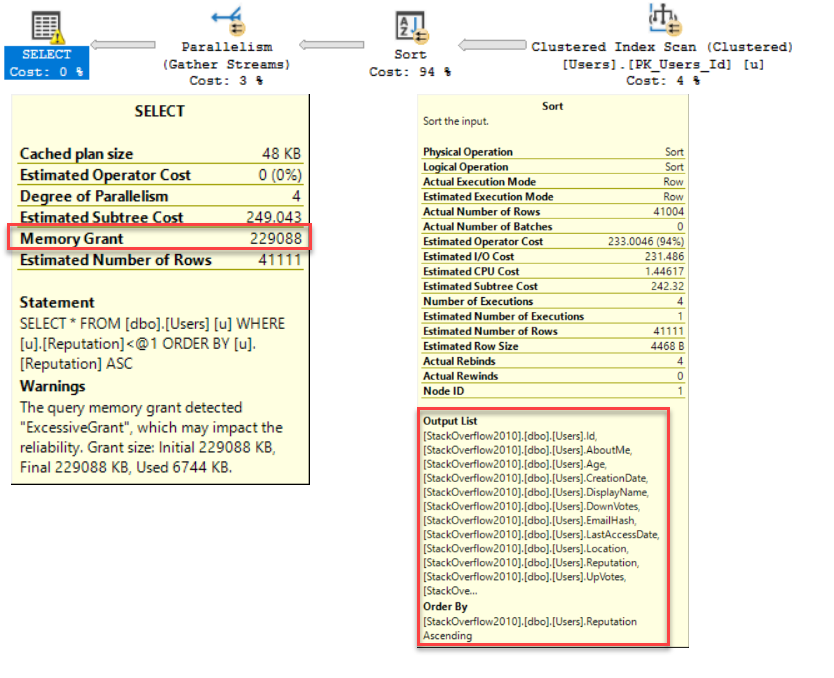 The Sort operator will ask for memory to sort all of the columns you request by the column(s) you're ordering by (this is greatly simplified, but going deeper isn't really necessary here).

If I add an index that supports the sort order (and in this case, the WHERE clause) I'm asking for, the query plan may change to use it. This isn't guaranteed, since at some point the optimizer may decide that doing a Key Lookup isn't in its best interests.

But in this case, I'm returning a small enough number of rows to make the Key Lookup attractive. It has six pack abs and a cool anime haircut, or something.

Of course, if I add more complexity to the ordering, the plan goes back to the original one that scans the clustered index and uses a Sort operator to give us the ordering.

The way you'd normally get around this is by adding a computed column:

But since you said:

Which makes the DATETIME literal the equivalent of calling GETDATE(), which means that your computed column wouldn't be determinstic. Having a non-deterministic computed column means you can't a) index it b) persist it.

Sometimes that's okay, but not when you're trying to sort data by it. There's no benefit here.

Of course, I'm saying all this with no insight into:

Which brings me back to my original point: You should do this sorting in the application.

Not the answer you're looking for? Browse other questions tagged sql-server performance sql-server-2016 index-tuning query-performance or ask your own question.