Why is my query suddenly slower than it was yesterday?

I have a (check all that apply)

that was running fine (if applicable)

but is suddenly slower now.

I've already checked to make sure it's not being blocked, and that it's not the victim of some long running maintenance task, report, or other out of band process.

What is the problem, what should I do, and what information can I provide to get some help?

Oh no, I'm sorry to hear that! Let's start with some basics to get you fixed up in a jiffy.

The thing you're running into is called Parameter Sniffing

It's a way out wiggy weird problem. The name rolls right off the tongue. Like the German word for squirrel.

And it's usually your friend.

When a query hits your server, a plan has to be compiled. To save time and resources later, an execution plan is cached based on the estimated rows that parameter will cause your code to process and return.

The easiest way to picture this going bad is to imagine a stored procedure that needs to count things from two lopsided populations.

What am I up against?

This is a genuinely difficult problem to find, test, and fix.

Sometimes, all you need is a little clarity. Or rather, your plan cache does.

If it's a stored procedure

Try running EXEC sys.sp_recompile @objname = N'schema.procname'. That'll cause the procedure to recompile a new plan the next time it runs.

What this won't fix:

What this doesn't guarantee:

You can also point sp_recompile at a table or view, but be forewarned that all code that touches that table or view will recompile. This could make the problem a whole lot harder.

If it's a parameterized query

Your job is a little more difficult. You'll need to track down the SQL Handle. You don't want to free the entire plan cache -- just like using sp_recompile against a table or view, you could trigger (ha ha ha) a whole bunch of unintended consequences.

The easiest way to figure that command out is to run sp_BlitzWho*! There's a column called "fix parameter sniffing" that has a command to remove a single plan from the cache. This has the same drawbacks as recompile, though.

What this won't fix:

What this doesn't guarantee:

Getting the query plans and query

If the query is running, you can use sp_BlitzWho* or sp_WhoIsActive to capture currently executing queries.

If the query isn't currently executing, you can check for it in the plan cache, using sp_BlitzCache*.

If you're on SQL Server 2016+, and have Query Store turned on, you can use sp_BlitzQueryStore*.

These will help you track down cached version(s) of your Stored Procedure. If it's just parameterized code, your search is a little more difficult. This may help, though:

You should see fairly similar output from any of those. Again, the query plan inviting cool blue clicky column is your friend.

The easiest way to share plans is using Paste The Plan*, or dumping the XML into pastebin. To get that, click on either one of those inviting blue clicky columns. Your query plan should appear in a new SSMS tab. 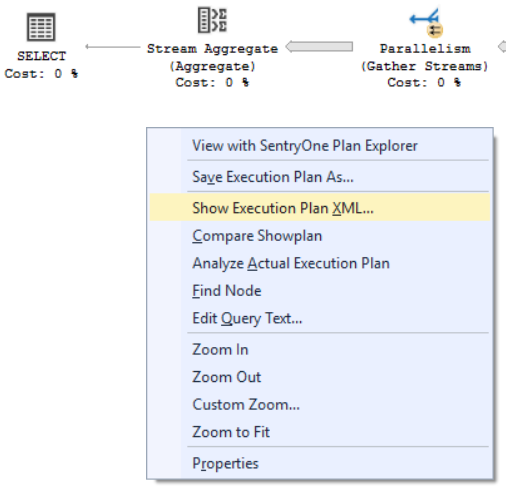 If you're touchy about sharing your company's code and query, you can use Sentry One's free Plan Explorer tool to anonymize your plan. Keep in mind, this makes getting help harder -- anonymized code is a lot harder to read and figure out.

All of these tools we talked about should return the Query Text. You don't need to do anything else here.

Getting the parameter(s) is a little more difficult. If you're using Plan Explorer, there's a tab at the bottom that lists them all out for you.

If you're using sp_BlitzCache*, there's a clickable column which gives you the execution statement for stored procedures.

Getting the table and index definitions

You can easily right click in SSMS to script things out.

If you want to get everything in one shot, sp_BlitzIndex* can help if you point it directly at a table.

I wanna do it myself!

Well, cool. I'm happy for you. You crazy person.

There are a lot of ways people think they "fix" parameter sniffing:

But these really just disable parameter sniffing in different ways. That's not to say they can't solve the problem, they just don't really get to the root cause.

That's because getting to the root cause is usually kind of difficult. You have to look for those pesky "plan quality issues".

Starting with the fast vs slow plans, look for differences like:

Also look for different operators that make your code sensitive to parameter sniffing:

Don't get too wrapped up in seek vs scan, index fragmentation, or any of the cargo cult-y stuff people hem and haw about.

If you want to learn more about parameter sniffing:

If you're reading this, and you think I missed a link or helpful tool, leave a comment. I'll do my best to keep this up to date.

Parameter sniffing is not the only possible cause for a query's varying performance. Any of the following common reasons may show the same symptoms:

Items 6 - 11 on this list can only happen after some explicit action was taken. I guess you meant to exclude those, but many times the one who is experiencing the challenge, is not aware that someone else made changes, and that's worth checking before you embark on the path of clearing plan cache entries.

Just to add to the existing answers in case they didn't help, when "suddenly" your queries behave differently on the next day, check:

Another possibility is that your Infrastructure Team is using tools such as vMotion on VMware and the VM that supports your SQL instance is being moved seamlessly from Host to Host without the DBA knowing about it.

This is a real problem when your Infrastructure is out-sourced...I'm having a real nightmare with it.

Not the answer you're looking for? Browse other questions tagged sql-server performance execution-plan parameter-sniffing query-performance or ask your own question.

5
Can I prove my database does not have memory issues?
3
Why would running a SQL query overnight break my database for the following day?
0
Reporting Services TempDB lock blocking report generation
5
Postgres 4x Slower Than It Was
3
ASP.NET & SQL Server 2012 timeouts once a month
1
Stored procedure execution time went from under 2mins to "infinity" without modifications
2
Query over SSRS/RPC:Completed a lot slower than SSMS
5
Why is Postgres CTE slower than subquery?