I'll say from the beginning that my question/problem looks similar to this previous one, but since I'm not sure if the cause or the starting info is the same, I decided to post my question with some more details.

So, my real question would be:

Why would a query on Query Store cause performance problems on the entire instance? Are we in a bug territory with Query Store?

As I said in the answer, the empirical test showed that there were indexes on sys.plan_persisted* system objects without any (none) statistics created over them. I suspect that is because the database is migrated from a SQL 2005 instance, and kept for a while at compatibility level 100, thus the new CE didn't get to be used.

This showed that the initial estimates were wrong. Done with a DAC connection, otherwise the tables are not available to query.

This showed that some indexes had empty stats (missing, none, zero).

This kind of fixed the stats and made the query finish in 10-12 seconds.

(verified only on a testing environment) and most likely the proper one, as it showed the best stats for the query, was to change the database's compatibility level to 130. The end result was that the query ended in about 10-12 seconds with normal number stats (10k rows).

Some related help about stats on system hidden tables.

The underlying issue, which is visible if you open the actual plan in SSMS and look at at CPU usage (or examine XML), is node 32, a TVF. The culprit in slow Query Store queries is repeated access of the in-memory TVFs. 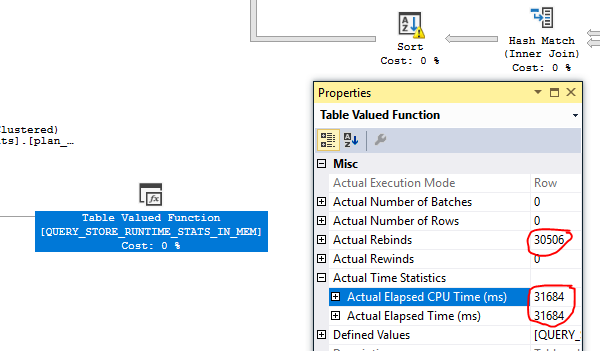 It doesn't matter how many rows are returned from these TVFs, only the number of times they are accessed. The fix will be whatever you can do to nudge your plans away from reading them multiple times.

Based on my limited debugging (both in skills and time spent), my hypothesis is that the entirety of the memory assigned for the particular in-memory component of Query Store data is scanned with each TVF execution. I have not been able to affect this memory allocation with either sp_query_store_flush_db or DBCC FREESYSTEMCACHE.

Successful workarounds so far include plan guides, hinting (OPTION(HASH JOIN, LOOP JOIN) has worked well enough for me so far), and running the Query Store queries on a read-only node of an AG.

Not the answer you're looking for? Browse other questions tagged sql-server-2016 statistics system-tables query-store or ask your own question.