Is there a setting in Oracle 11g that can throttle the rows/second being pulled from the db?

Our data loads from Oracle are really slow. It does not seem to matter whether its OPENQUERY, SSIS, or SQL Developer. I ran some tests and found that as the row number increases, the time to transfer increases in a linear fashion (100K rows in 90 seconds, 1M rows in 903 seconds). I then ran another test where the row count remained the same (500K) but the amount of data in each row increased with each trial. For this test, the time was almost flat (~480s), even though the amount of data increased from 5MB to 45MB over 10 trials.

The issue does not seem to be a throughput (VPN tunnel) problem since data speed increased with data/row.

So, my question is, what in Oracle would be causing this consistent 1000 rows/sec value, regardless of the amount of data in each row?

We don't manage the Oracle db, but I'm hoping to go back to the dbas with some ideas to speed up our month end loads. 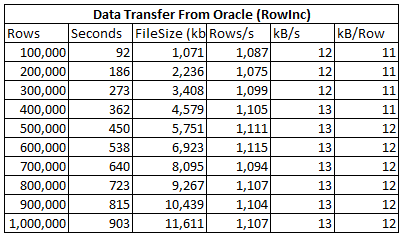 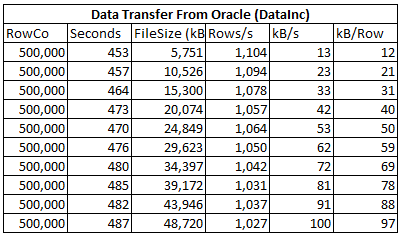 More likely limited by the fetch size, which is a client side setting.

Batch size controls how many rows SSIS retrieves with each “batch”. After retrieving all the rows in a batch, SSIS signals to Oracle that it is ready for another batch. Of course, network latency is introduced during this signaling process. Thus, decreasing the number of total batches also decreases the number of round-trips SSIS has to make. The default batch size is only 100; increasing this to a reasonable number should boost performance.

Use Attunity Connector for Oracle This will definitely boost performance. https://docs.microsoft.com/en-us/sql/integration-services/attunity-connectors?view=sql-server-2017 If feasible, hit query on single partiton at a time which will give immense performance enhancement.

Not the answer you're looking for? Browse other questions tagged oracle ssis oracle-11g or ask your own question.