Why does a plan with FULL optimization show simple parameterization?

Then why is this plan showing Full Optimization, and Simple Parameterization at the same time? 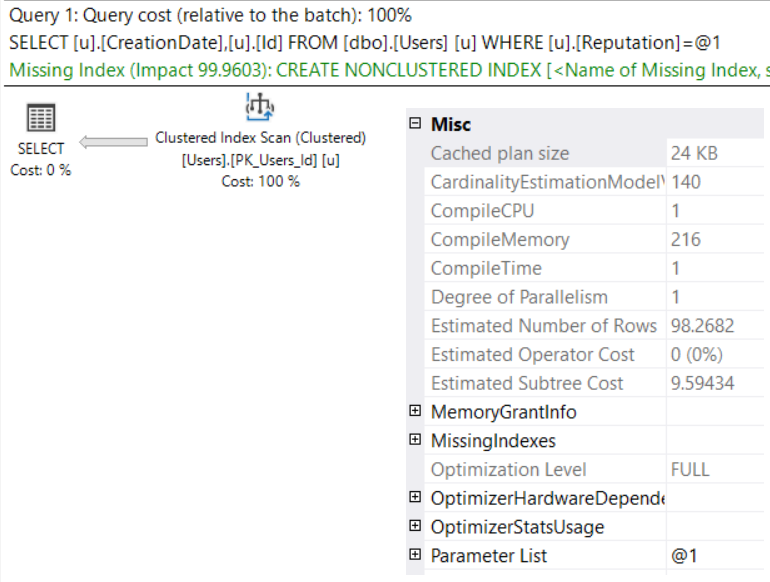 In the question example, setting the cost threshold for parallelism higher than the cost of the trivial plan will allow the optimizer to stop at that stage.

Looking at the query plan isn't always enough to figure out if your query has actually been Simple Parameterized.

The safest way is to check some DMVs to verify:

Additionally, you can also use undocumented trace flag 8607, but not as an OPTION clause hint. Using the OPTION clause prevents a trivial plan.

If the plan is considered safe for Simple Parameterization, you'll see a message confirming it here.

Not the answer you're looking for? Browse other questions tagged sql-server execution-plan trivial-plan simple-parameterization or ask your own question.

33
Why does SQL Server use a better execution plan when I inline the variable?

8
Can I get SSMS to show me the Actual query costs in the Execution plan pane?
6
How bad is query plan pollution (too many equivalent plans in cache)?
2
Understanding the simple execution plan in PostgreSQL
1
Plans created several times under Forced Parameterization
8
When does an execution plan not show in sp_WhoIsActive?
5
Resolving sp_Blitz Finding: Many Plans for One Query
7
When are non-parameterized, non-trivial, adhoc query plans reused